Michael Brown, Eric Garner, and the perversity of political triage

Michael Brown, Eric Garner, and the perversity of political triage 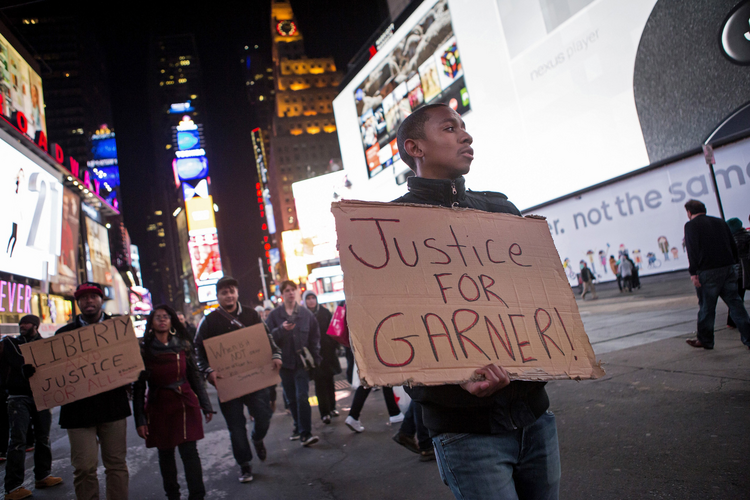 There’s a big contrast in reactions to the decisions of two grand juries not to indict police officers involved in the killing of two unarmed civilians, both black men. In the case of Michael Brown, shot multiple times in Ferguson, Mo., political divisions have influenced opinions over whether police officer Darren Wilson should be prosecuted, and polls indicate that Republicans are more likely to believe Wilson’s version of events. In the case of Eric Garner, choked to death on Staten Island, people from across the political spectrum are shocked at the waving away of police brutality by the grand jury.

One reason for the near-unanimity of opinion in the Garner case is that the incident was recorded from start to finish. The Federalist’s Sean Davis writes, “unlike the Michael Brown case in Ferguson, which was murky and muddled at best, Garner’s completely unnecessary death was captured on video.” Conservatives and libertarians are also miffed that Garner was apprehended for the crime of selling “loose cigarettes.” Kentucky Sen. Rand Paul said, “Some politician put a tax of $5.85 on a pack of cigarettes, so they’ve driven cigarettes underground by making them so expensive. But then some politician also had to direct the police to say, ‘Hey, we want you arresting people for selling a loose cigarette.” (But store owners reportedly complained to police about Garner’s sidewalk sales. Brown was stopped by police for walking in the street, which probably didn’t bother anyone.)

The Garner case is much simpler to explain and easier to address. You can try to contain it in a discussion of police tactics, whereas the Brown case leads to all kinds of questions about race and inequality in America.

Geography always counts. Look at the where the two cases took place.

New York is a large, prosperous city with a relatively healthy job market. It has low crime rates that have only dropped further since Mayor Bill de Blasio suspended the police department’s “stop and frisk” practice that targeted young black men. Racial segregation may persist in housing and in social circles, but New York is an outlier in that most residents interact with people of different color on a daily basis. No one wants to see the police choking anyone to death anywhere near his or her neighborhood. Reforming the police department to prevent deaths like that of Eric Garner carries little risk of a backlash among voters in the city.

Ferguson, Missouri, is a small, depressed city whose boundaries reinforce economic and racial segregation from wealthier suburbs. It has a weak property tax base (now weakened further by rioting and property destruction), and so it depends on revenue from traffic fines and court fees for minor offenses. This encourages the police, almost all white in a city that is 67 percent black, to be aggressive in stopping and interrogating residents. Ferguson is not a commercial hub or tourist destination, and people drive around it whenever possible. Changes to police training aren’t going erase tensions between the police and residents, and more comprehensive reforms (such as state aid to lessen the dependence on fines and reduce the inequality of government services among towns) face a hostile state electorate.

Partly because New York is America’s media capital, we may be getting more coverage and follow-up about the Eric Garner case. The Garner case may also be an opportunity to narrow the focus on police training as opposed to the more pervasive and intractable sources of racism and economic segregation in Ferguson. This is understandable in that it’s tempting to tackle to problem that seems to have an easy solution first. There is certainly more consensus on the Garner case, so it makes political sense to move it to the front of the line in addressing police brutality. Ferguson, however, should not fade into the background.