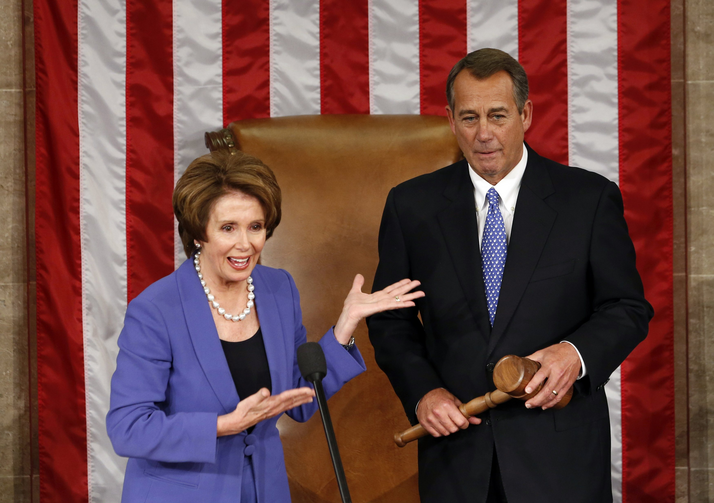 Happy new year, and happy midterms! (We’re now in the “nothing can get done because it’s an election year” mode, which is half the time, since nothing can get done during the holiday season in any year.) Given the divided government in Washington, we could see a lot more legislative action on the state level, with voters embracing a locovore’s approach to politics. Governing magazine has a handy list of issues to watch in the states, including immigration, the minimum wage, and transportation funding.

The “increasing divergence between the places where lots of Democrats live and the places where lots of Republicans live,” as Paul Waldman puts it, is a topic that this blog will surely revisit. In the meantime, let’s consider the low expectations of Capitol Hill reporters. The Los Angeles Times’Lisa Mascaro predicts little legislative action, as “the Republican-led House and the Democratic-controlled Senate will essentially become something like sound stages for the advertising wars that will unfold in the handful of states and districts that could decide partisan control of the next Congress.”

Politico’s Darren Samuelsohn tells readers to “get ready” for not much of anything:

Lawmakers are reluctant to rely on the federal government to get anything done — a guilt-by-association consequence of Obamacare’s botched rollout. Republicans have called it an indictment of more than a website, but of Big Government itself.

Samuelsohn acknowledges that Democrats generally do not agree with this analysis — not because they doubt that little will be accomplished, but because they’re incredulous that anyone ever thought otherwise. And so we get this quote about the dim prospects of legislation to address climate change in 2014, which obligingly refers to Obamacare while undermining the premise of Samuelsohn’s article: “‘It put a knife into something that was already dead and buried,’ said David Goldston, government affairs director at the Natural Resources Defense Council."

Seth Masket calls the Politico piece “alt-history” for the suggestion that the stink of the Affordable Care Act rollout is what’s preventing the Republican majority in the House of Representatives from working with the White House: “Democrats were never going to have an easy time passing immigration reform, cap & trade, or a carbon tax (!?!) in such a polarized environment, and it’s disingenuous to suggest that this is all due to the ACA.” He passes on a tweet from America University’s Richard Skinner: “Writing ‘divided government + polarized parties = not much going to get done’ gets boring after awhile. But it’s true!”

One question for 2014 is whether the bad blood in Washington will be matched in state capitals — most of which are not under divided government. (The Washington Post calculates that “three-quarters of the states — more than at any time in recent memory — are controlled by either Republicans or Democrats,” as opposed to the split control at the federal level.) There is some evidence that state legislators have become at least as polarized at their national counterparts (stats here), which means that getting things passed will be the result of solidarity rather than bipartisanship.

There are a few states where both parties have to work with each other, such as Kentucky, which is among the six states with Democratic governors facing at least one Republican-controlled legislative chamber (the others: Arkansas, Missouri, Montana, New Hampshire, and Virginia). But Democrats there know enough to keep their distance from the national party. Kentucky is one of the few states carried by Mitt Romney that has set up its own health insurance exchange in accordance with the Affordable Care Act (ACA), and Beth Reinhard reports in the National Journal that it’s downplaying any association with the president:

Just don’t call it Obamacare. In Kentucky, a marketing campaign has cleverly branded it “kynect.”

“It really is strategic,” said Barbara Gordon, director of the state’s division of social services, which is helping to oversee enrollment. “We've had events where people say, ‘This sounds a whole lot better than that Obamacare!’ We train our people not to use that word, and it’s effective in breaking down that wall against President Obama.

Reinhard finds some contradictory thinking about the role of government among Kentucky voters, with recipients of Medicaid and food stamps slamming the Democratic Party and saying that Washington has “never done anything for me.” It’s an attitude that has helped the GOP hold the House and make gains in state legislatures in recent years.

The get-your-government-hands-off-my-Social-Security train of thought has been good for congressional Republicans (if not the Romney presidential campaign). But pandering to the older recipients of entitlement programs doesn’t sit so well with the libertarian wing of the party. And so we have another question for 2014 and beyond: Will Republicans at the state level, under less media scrutiny than their counterparts in Washington, take stronger action toward reducing the scope of government? One sign that the answer is yes: the 25 Republican-led states that have turned down federal money to expand Medicaid under the ACA. But there are signs that the left is also looking to state government to pursue its goals, such as raising the minimum wage, guaranteeing paid family leave, and funding early education. Even if not much gets done on Capitol Hill this year, state legislatures may be busier than ever.