Will Hillary Clinton make it to the White House? 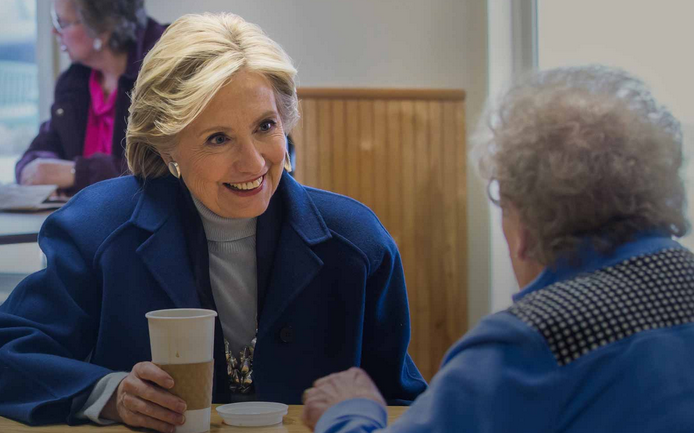 Yesterday, Hillary Clinton made it official that she wants to be president, finally putting an end to the “But what if she doesn’t run….?” stories that were the only opportunities to imagine Joe Biden or Martin O’Malley in the White House. Now we can spend 18 months chewing over her chances against the Republicans.

Former president Bill Clinton seemed to lower expectations for his wife when he told a reporter for Town & Country magazine, “It’s hard for any party to hang on to the White House for 12 years, and it’s a long road. A thousand things could happen.” Does Bill have history on his side when he suggests that Hillary has a handicap in trying to succeed Barack Obama, a two-term president from her own party? (Bigger question for fans of The Good Wife: Can Bill Clinton say anything about Hillary’s political career without making us think of Peter Florrick and his opaque motives?)

The Washington Monthly’s John Patty gives Bill some cred, noting that since World War II, “there have been 6 elections in which one party has controlled the White House for exactly 8 years. The other party has won 5 of those. Maybe Bill has a point.”

But Patty goes on to note that four out of the five instances in which a party was tossed out of the White House after two terms were “pretty unusual cases.” The 1960 election, in which John F. Kennedy ousted the Republicans, was “very close and arguably riddled…with fraud.” In 1968, the Democrats’ task of winning a third term was complicated by the relatively late decision by Lyndon Johnson not to run again, which led to a brutal fight for the nomination that included an assassination (Robert F. Kennedy) and riots at the national convention. In the 1976 race, the Republicans, reeling from the Watergate scandal, went through their own nomination donnybrook, and their nominee was the only U.S. president (Ford) never elected to national office. The notorious 2000 election was decided by the Supreme Court because of the disputed vote count in Florida, and the Democrats actually won the popular vote for a third consecutive time.

That leaves 2008 as the most clear-cut case of an “eight-year itch,” but there were singular factors that year as well, including a financial meltdown only a few weeks before the election and the first nomination of an African-American by a major party, which upended voter turnout models.

Eight years in office is a disadvantage, but not necessarily a fatal one

Patty provides some essential context, but there is strong evidence of weariness toward a political party after eight years in power.

There have been nine instances during the past century of a political party trying to win a third term in the White House. In eight of the nine times, the incumbent party got a lower share of the vote than in the previous election, as well as a lower number of electoral votes, and carried fewer states than before. (See chart below.) The exception was in 1928, when the Democrats alienated much of the country with the first nomination of Roman Catholic, Al Smith. But even then, Republican Herbert Hoover won by a smaller percentage than Calvin Coolidge had four years earlier. (This time there was no major third-party candidate, as there had been in 1924, to split the anti-Republican vote.)

What’s worrisome for Hillary Clinton and the Democrats is that the party in power seems almost destined to suffer some erosion in popular support after eight years, and Obama’s 51.0 percent (and 3.9-point victory margin) in 2012 isn’t much of a cushion.

Over the past century, there has been an average 7.5-point drop in the share of the vote received by the party seeking a third term, ranging from the 4.2-point jump for Hoover in 1928 to the 18.4-point plummet for Democrat Hubert Humphrey in 1968. Al Gore suffered the smallest decline, less than a percentage point, in 2000, but because Ross Perot was no longer on the ballot to split the ant-Democratic vote, Gore lost almost all of the 8.5-point lead Clinton had enjoyed over Bob Dole in 1996.

This history suggests that it will be difficult for Hillary Clinton to match Obama’s re-election showing, but it’s hardly impossible. Since 1900, Obama has been the only president other than Jimmy Carter (1980) and Coolidge (1928) not to improve his party’s percentage in its first election after capturing the White House—so the Democrats don’t have many rally-round-the-incumbent votes to shed. It’s also significant that Obama’s predecessor, George W. Bush, didn’t get much of a second-term bounce; his 50.7 percent is the lowest for any president winning re-election since 1916. Both of these facts support the idea that the American electorate is now highly polarized, with neither party able to shift many votes to its column in 2016. (From the Paul Krugman’s Monday column in The New York Times: “the differences between the parties are so clear and dramatic that it’s hard to see how anyone who has been paying attention could be undecided even now, or be induced to change his or her mind between now and the election.”)

Few political scientists would be surprised if Clinton wins the same states that Obama did, no more and no less. I consider her a slight favorite next November, but the Republicans are not going to do her the favor of nominating someone too far out of the mainstream. The third-term slump makes it very unlikely that she’ll break through with the kind of decisive victory that will much strengthen the Democrats’ position in Congress.

Robert David Sullivan
RobertDSullivan
Show Comments (
1
)
Comments are automatically closed two weeks after an article's initial publication. See our comments policy for more.
Carlos Orozco
6 years ago
So Hillary "We came, we saw, he died!" Clinton is running? She is as of now the ultimate status quo candidate, completely aligned with the banking-industrial-military complex.