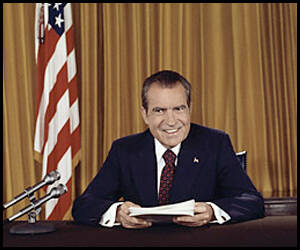 Could Donald J. Trump actually be elected president? Politico’s David Bernstein looks at the demographics and the polling data and has a reassuring answer for those horrified by the prospect: “The math suggests Trump would need a whopping 70 percent of white male voters to cast their ballots for him. That’s a larger percentage than Republicans have ever won before—more than the GOP won in the landslide victories of Ronald Reagan and George H.W. Bush, and far more than they won during the racially polarized elections of Barack Obama.”

Even if Mr. Trump brings more white voters to the polls, his presence on the ballot would likely inspire more non-white citizens to come out to vote against him.

But besides President Reagan, there is another Republican who came close to the 70 percent mark: Richard Nixon in 1972, who got 66 percent of white males according to The New York Times and 68 percent of all white voters according to Gallup. That probably wouldn’t be good enough for Mr. Trump in a two-candidate race, with an electorate that’s much less white, but it could give him a plurality if there’s a serious third candidate. (The brief possibility that Michael Bloomberg would jump in and deny the Democrats some upper-income, well-educated white men who could not bear to vote for Mr. Trump must have brought some glee to the GOP frontrunner.)

The raucous and even violent atmosphere at some Trump rallies, egged on by the candidate himself, brings to mind the 1968 presidential election, in a year marred by political assassinations and the police clashing with protestors outside the Democratic convention. On Sunday, elections maven Nate Silver tweeted, “Wonder if Trump's recent behavior is intended to produce an implied threat that a contested convention could become violent.” That’s a credible theory; conventions are now so carefully managed that no one really knows how a more spontaneous gathering would come off on YouTube and Twitter, and I’m sure most Republican leaders don’t want to find out. But I think it is at least as likely that Mr. Trump is promising an convention with a lot of drama in the streets even if there’s no more resistance to his nomination. Protest marches would certainly help him campaign as the law-and-order candidate in the fall and as the champion of the “silent majority,” a phrase first used by Nixon in 1969.

There are some obvious differences between the always-wealthy Mr. Trump and the 37th president. Richard Nixon really did come from humble beginnings (the “son of a grocer,” as Ted Cruz might have put it in the most recent GOP debate) in small-town America, so his resentment of elites and intellectuals was not an act. Nixon was also a grind who was knowledgeable about just about any public policy issue, while Mr. Trump shows a breathtaking lack of interest in facts. But the differences may simply reflect the times. In the 1950s, most voters could identify with Nixon’s defense of plainness and simplicity as symbolized by his wife’s “respectable Republican cloth coat,” but after the glitz of the ’80s and the arrival of cheaper consumer goods, contemporary voters may feel some kinship with a man mocked by the intelligentsia for tackiness and conspicuous consumption. And when Nixon came on the scene, nearly every American got fact-checked information from daily newspapers and the big three TV networks. Today voters are more likely to get their news from partisan outlets or social media and can identify when Mr. Trump says whatever suits him with the excuse, “All I know is what’s on the Internet.”

The big similarity between the two men is their ability to tap into resentment and fear about social changes within the United States and security threats from without—civil rights movements and communism in Nixon’s day, vanishing blue-collar jobs and ISIS today. (Actually, resentment and fear over civil rights movements never completely went away.) Unlike, say, Ronald Reagan, Nixon was not likely to win a “who would you want to have a beer with?” poll, but working-class Americans could admire his doggedness in overcoming media ridicule and resurrecting a political career after losing to the celebrated Kennedy family. Many of today’s voters may get a similar vicarious thrill from Mr. Trump, writes Arthur Goldhammer in the American Prospect: “He has made a career of portraying himself as a man who gets things done, who builds buildings, beds women, pummels opponents, hires and fires apprentices. His followers want things done and, having identified with his self-presentation to the point of fusion, they have convinced themselves that with him their wishes, no matter how contradictory, will all be fulfilled.”

In his acceptance speech at the 1968 Republican convention, Nixon said, “America is in trouble today not because her people have failed but because her leaders have failed. And what America needs are leaders to match the greatness of her people”—not too far from Mr. Trump’s characteristically simpler “Make America Great Again.” Nixon also denounced the incumbent Johnson administration in terms familiar from this season’s Republican debates: “For the past five years, we have been deluged by government programs for the unemployed; programs for the cities; programs for the poor. And we have reaped from these programs an ugly harvest of frustration, violence, and failure across the land.” Again, Mr. Trump would probably be pithier: “We’re losing!” (Just how is he going to fill the time of a convention speech without hecklers?)

Nixon was barely elected in 1968, with George Wallace winning five states and 14 percent of the popular vote as a third candidate. But in 1972, he swallowed the Wallace vote whole and got two-thirds of the white male vote, depicting Democratic nominee George McGovern as a One World Government patsy who would threaten America’s privileged status.

Mr. Trump would not have an easy time following the Nixon strategy. The electorate was much more elastic then, with millions moving back and forth between the two major parties; “Democrats for Nixon” was easier to assemble than “Democrats for Trump” will be. Nixon also had the freedom within the Republican Party to be pragmatic. He had no interest in sacrificing votes for ideological orthodoxy, so he was friendlier to labor unions and environmentalists than any GOP nominee in 2016 could be. Mr. Trump would undoubtedly pivot to the center as the Republican nominee, but it will be tough to come up with views on health care, Social Security, climate change, gun control, abortion and same-sex marriage that will satisfy 70 percent of white male voters.

His only chance would be to override all those issues with the single issue of America Under Threat—from within (immigrants, #BlackLivesMatter protestors) and without (ISIS, China, ISIS and ISIS). The data say this won’t work, but we would still be in for a tense and divisive campaign.

Robert David Sullivan
RobertDSullivan
Show Comments (
1
)
Comments are automatically closed two weeks after an article's initial publication. See our comments policy for more.
Vincent Gaglione
6 years 8 months ago
I just wrote yesterday, in a response to an e-mail from one of the protesting groups at the cancelled Chicago Trump rally, that I'd prefer that they stop their boisterous protests lest we have a repeat of the 1968 election where Nixon won the election by persuading white America and the wanna-be white America that our solution was law-and-order. I agree with Sullivan's analysis. What frustrates me most of all are all the Catholics who so stridently support Trump!