American government may be doomed by efficiency, not by dysfunction 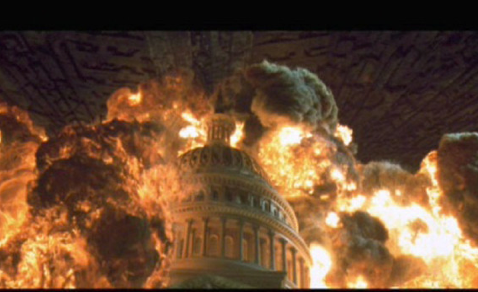 Political scientists pricked up their ears last week at Matthew Yglesias and his essay on Vox titled “American Democracy Is Doomed.” It’s worth reading in its entirety, but the thesis is in the first sentence: “America’s constitutional democracy is going to collapse.”

The essay has prompted lots of responses, mostly disagreeing with the premise, from political bloggers—who were happy to take a break from writing about the constant threat of a government shutdown and the inability of Congress to address immigration reform, income inequality, and other major issues.

Yglesias writes, “within a presidential system, gridlock leads to a constitutional trainwreck with no resolution. The United States’s recent government shutdowns and executive action on immigration are small examples of the kind of dynamic that’s led to coups and putsches abroad.” Political leaders are now playing “constitutional hardball,” he argues, or “moves that do not violate the letter of the law, but do trample on our conventional understanding of how it is supposed to work."

I don’t dismiss Yglesias’s fears, and Ezra Klein’s counter-argument that we’ll “muddle through” the current gridlock in Washington isn’t completely reassuring. If there’s a constitutional crisis, it may not come when opposite parties control the White House and Congress, but when one of the major political parties gets enough power to push through policies that are hated by a large part of the American population.

The greatest achievement of American government has been its survival. It hasn’t slid into fascism or libertarianism (i.e., feudalism) during the Great Depression or other economic crises. It hasn’t turned to martial law, at least not at the national level, in response to civil unrest.

But the American way of governing has never been quick or nimble. The worst example is its abysmal record on civil rights. Slavery persisted for decades after it was recognized as an abomination by Europe, and even after a civil war that ostensibly settled the question in favor of equal rights for African-Americans, we quickly instituted an apartheid system that sanctioned white supremacy for another century. (See Ta-Nehisi Coates’s “The Case for Reparations.”) Our procrastination in reckoning with racism was attributable to our fear that the nation would fall apart (or fall apart again, after the 1860s) if the federal government tried to enforce basic human rights. This fear was not unwarranted in the early 19th century, when the United States was the largest and most advanced democracy—not with universal suffrage, but with the rejection of privileged status for property owners and first-born sons—and the collapse of our government could have indeed set back the cause of freedom worldwide.

Our fear of upsetting white supremacist traditions meant that we did not advance on civil rights until extraordinary circumstances in the 1960s: the embarrassment of racism at home when we were competing with the Soviet Union for influence in Africa and Asia; the unprecedented mandate for Lyndon Johnson and Northern Democrats in the 1964 election, after the assassination of John F. Kennedy; and both the civil disobedience and threat of violence by African-Americans rightfully angered by the slow pace of integration.

We’ve ducked plenty of other issues in our history. Our westward settlement was violent and chaotic, with much territory acquired through the whims of military leaders like Andrew Jackson, rather than through open deliberation in Washington. The national government dithered on building an infrastructure of roads and canals, to the detriment of the economy and the safety of travelers. (Railroad barons eventually helped us out, at least until President Eisenhower socialized the highway system.) Health care has been a mess, and it took 60 years to catch up with the rest of the industrialized world and pass a law that aims at universal access to affordable care. That law is now at risk of invalidation by the Supreme Court, repeal by a future president and Congress, and perhaps nullification by certain states; if “Obamacare” disappears, we’ll go back to the system in which great wealth or labor-union membership are the only guarantees of health coverage, except that states are now legislating labor unions out of existence.

It must be said that many Americans consider the government’s sluggishness to be a feature, not a bug. How you feel may depend on the glacier-like implementation of the 1975 law calling for the U.S. to join the rest of the world in adopting the metric system. Is it a sign of our government’s ineffectiveness, or is it proof that America’s strength lies in its sullen-teenager disregard for rules set by Washington?

Can Washington muddle its way through anything?

Again, the most compelling argument for our system of government is that once we do make progress, it’s difficult to reverse things. Much of the current debate on immigration laws is xenophobic and un-Christian, but we don’t see the rise of nativist, neo-fascist parties that we do in Europe—partly because our two-party system makes it nearly impossible for fringe parties to gain power and re-legitimize the hateful speech of less enlightened times. Similarly, it’s doubtful that any faction could grab enough levers in the national government to turn back the clock on rights for women, racial or religious minorities, gays and lesbians, or the disabled.

This doesn’t mean Ygelsias is wrong. There have been more signs of government dysfunction as the two major parties move farther apart in a constitutional system that doesn’t even recognize political parties. So far we’ve been lucky. The 2000 election, awarded by the Supreme Court to the candidate who won fewer votes, did not seriously undermine the credibility of the American government—though Yglesias writes, “[it’s] unnerving to imagine a Bush-Gore style recount occurring in 2014’s political atmosphere.”(The victory went to the more authoritarian of the two major parties, the one with more support among the military, law-enforcement agencies, and Wall Street. We’ll never know how things would have played out had a Democrat won the Electoral College while losing the popular vote.) We have not defaulted on the national debt, and we have not—yet—had an empty Supreme Court or presidential cabinet because of the Senate’s refusal to confirm presidential appointments.

In his “muddle through” rebuttal, Klein predicts that “persistent problems in governance will eventually lead to some significant, albeit far from transformational, changes—such as the elimination of the Senate filibuster, the growing use of executive orders allowing the president to bypass Congress, and allowing the federal debt ceiling to rise without the authorization of Congress. (In another response to the Yglesias essay, Vox’s Dylan Matthews argues that the greatest danger for American democracy comes from those executive orders and the expansion of their scope “until the presidency’s powers are so immense as to be no longer recognizable.”)

Klein also predicts, in an almost throwaway line near the end of the piece, “When governing majorities do exist, they will govern more aggressively—much as the Democrats did in 2009 and 2010.” He seems to be referring to the Affordable Care Act (an alternative to the single-payer system favored by liberal Democrats) and perhaps the economic stimulus package that was shrunk significantly in order to win three Republican votes in the Senate. But that “aggressive” governing has sparked aggressive resistance, with Obama’s opponents constantly questioning his legitimacy as president and refusing to accept his legislative victories.

As Yglesias writes, “From its very first months, Obama’s presidency has been marked by essentially nothing but constitutional hardball. During the Bush years, Democratic senators sporadically employed a variety of unusual delaying tactics to stymie his agenda. In 2009, Mitch McConnell and Senate Republicans retaliated by using tons of them, constantly. Suddenly filibustering went from something a Senate minority could do to something it did on pretty much all motions” (as seen in the chart above).

This is all very frustrating to anyone who expects the government to function normally, let alone address long-term problems. But what if gridlock is the only thing keeping the United States together? Our entire history has conditioned us to expect half-measures and abandoned initiatives from the federal government. We don’t know how we’d react if an unprecedentedly disciplined, ideologically cohesive political party seized control of the White House and Congress and governed “aggressively.” (The past few years in Wisconsin provide one example, with protest marches and an attempt to recall Republican Gov. Scott Walker.) Would states governed by the opposite party be bolder about trying to “nullify” federal law, the way same states have tried to do with Obamacare? Would the minority party in Congress refuse to participate in votes, or resort to political theater such as boycotting State of the Union addresses?

And is the lesson of Obama’s first two years that a party in control of the White House and Congress should ram through as much legislation as possible before it’s inevitably turned out in the next election?

Muddling through a period of divided government may be wearily accepted by a largely disengaged and cynical electorate with low expectations of Washington. When the Democratic or Republican party gets the chance to run things more like a parliamentary democracy, with more sweeping changes than we’re used to, then we’ll find out how strong our constitutional framework is.

Robert David Sullivan
RobertDSullivan
Show Comments (
1
)
Comments are automatically closed two weeks after an article's initial publication. See our comments policy for more.
Chuck Kotlarz
6 years 2 months ago
Grid lock and dysfunction typify DC, but year after year, Conservative politicians in deep red states and Liberal politicians in deep blue states give those states a virtual gold mine of partisan legislation. Now do what Ronald Reagan did. Reagan used an “index” to characterize Jimmy Carter, his opponent in the 1980 presidential election. Reagan used the “misery index”, an index found by adding the unemployment rate to the inflation rate. Voters expected a worsening misery rate to create high economic and social costs for the country. Now pick an index to characterize deep red and deep blue states, divorce rate for example. Just compare the average divorce rate of deep red states to deep blue states. Pick any number of indexes, poverty rates, educational attainment, innovation, traffic fatality rates, internet speed, percentage of seniors that still have their natural teeth, etc. Want to spend another year or two with a parent or grandparent? Check the grandparent index (life expectancy). Few things perhaps are more “functional” than the right to vote.