Voices of Faith discussed the expanding role of women in the church at the Vatican. 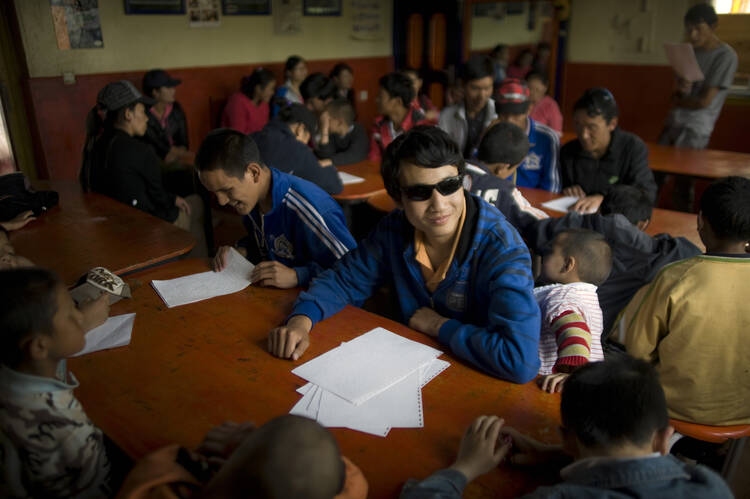 “Women are knocking on the door of the church. We are knocking right now. But I fear a generation will come that will stop knocking,” Dr. Carolyn Woo, president and C.E.O. of Catholic Relief Services, USA, told a meeting of Voices of Faith at the Vatican on March 8.

She made her comments during a panel discussion organized by Voices of Faith, a Catholic women’s international network, on the theme: “What women want—a multigenerational conversation on expanding women’s leadership in the church.”

“This conversation about women is not for women, it is for the church,” Woo told the third annual gathering of Voices of Faith, held in the Casina Pio IV, to celebrate International Women’s Day. The question of women’s ordination was not on the agenda at this meeting, which brought together some one hundred women from all continents, among them three of the twelve women Ambassadors accredited to the Holy See.

A number of men, including a few priests, were also present. One of them, Thomas Smolich, S.J., international director of Jesuit Refugee Service (J.R.S.), acted as moderator for the panel discussion. He raised three questions to start the conversation: What is going well in the church for women today, what opportunities are opening up? Where does the church need to open up more for them? What are the moments of enlightenment that one can point to in this field?

Dr. Woo, who was one of the persons invited last year to present the pope’s encyclical “Laudato Si’” at the Vatican press conference, highlighted the church’s commitment and effort on behalf of women and girls worldwide, but also noted that 80 percent of the church’s work is done by women. Comparatively speaking, she said, more women are presidents of Catholic universities than of secular ones, and hold top positions in health care institutes, too. (This remark seemed to refer to the United States).

Like other speakers, she highlighted the “inspiring” message and witness coming from Pope Francis. Like his predecessor Benedict XVI, he too has spoken about “the feminine genius” but he has also given Dorothy Day, the social activist, as an example of this genius.

“We can’t talk about the role of women in the church without talking about the role of motherhood,” Geralyn Sheehan, country director for the U.S. Peace Corps in Colombia, stated. She has done much work with migrants and refugees and noted that mothers are the ones who teach children about service. Contrasting the period when she was growing up to the present day, she detected a generational change in the USA that suggests there are fewer young women in the church today. She views this with some concern. She spoke too about the fact that women are so often victims of physical violence and sexual behavior; indeed one in four experience violence in their lives. It is an issue the church must address.

“Institutions never change because they should, they change when it’s in their self-interest,” Sheehan stated. And she asked: What could be the self-interest of the church in relation to women?

“The self-interest of the church is to attract women,” responded Petra Dankova from the Czech Republic, a postulant of Sisters of the Holy Redeemer who has worked with refugees in Africa, Asia and the Middle East. She rejected the idea of the church as a male-dominated institution to which women were “somewhat external,” and said that since converting to the faith she has always seen the church as a community. She advocated the awarding of fellowships to women to be engaged in church structures at different levels, including in Vatican departments.

A young high-school teacher of English from India, Gayatri Lobo Gajiwala, who was born into a Catholic-Hindu family that is deeply religious on both sides, spoke about the many ways women are being involved in the church in the world’s largest democracy today. “Women and men have equal leadership skills,” she said. At the same time she made one request to the church everywhere: “welcome” women. She revealed that her appeal stems from a personal experience when, visiting a church outside her parish in Mumbai, the priest refused her communion because, he told her, “you look too Indian!”

New Jersey born Nicole Perone, who is studying for a Masters in Divinity at Yale University, spoke of the pressing need for “a cultural shift” in the Catholic Church’s attitude to women. “Women have every opportunity in the secular world—I could even be president of the United States!—so why not in the church? Is the church not doing itself a disservice by not giving more opportunities to women?” she asked. She wondered why women could not be appointed to lead such Vatican offices as the councils for the laity or the family.

One proposal that gained the panel’s support was this: Every seminary should have a study course on women, which looked at the history and role of women in the church and in society. It was argued that this would help open the eyes of seminarians to the contribution women can make in the church.

The panel discussion was the last event of this festive, colorful annual day-long celebration of Voices of Faith on International Women’s Day, that began with Mass, at which Petra Dankova gave a reflection. The gathering was sponsored by the Fidel Götz Foundation, a charitable trust based in Liechtenstein, and organized by its managing director, Chantal Götz.

“Mercy requires courage” was the logo for this year’s celebration that involved a mixture of song (by a Congolese group), and the sharing of personal stories by women from different countries active in their courageous struggle to build a more human world.

One of the women, Croatian born Katarina Kruhonja, abandoned her work as a senior specialist at the Clinical Hospital in Osijek to join the post-war building efforts in Eastern Slavonia. She told of her effort in recent years to strengthen the culture of non-violence and to create a dialog with divided societies in her homeland that still suffers from the wounds of war.

An American nun, Mary Doris, from the Sisters of St. Dominic, recalled her work with the poor in the Bronx, N.Y., where she established Siena House, which has assisted 2,500 homeless mothers over the past 26 years.

Cecilia Flores-Oebanda, from the Philippines, recalled her childhood as a child laborer in the Visayas region and her imprisonment for participating in the armed struggle against the Marcos dictatorship. After her release, she dedicated her life to combatting modern slavery so that other women could regain their freedom. Continuing this struggle against modern slavery, in 1991 she founded the Visayan Forum Foundation, which already has assisted 18,000 victims and potential victims.

A German woman, Sabriye Tenberken, who has been blind since the age of 12, told how in 1997, together with Paul Kronenberg, she founded Braille Without Borders, the first school of its kind in Tibet, that enables blind people to take their lives in their own hands. They also founded Kanthari in Kerala, India, in 2005, which is a school for social entrepreneurship that attracts global citizens who have a passion to make the world a better place.

They were followed by two young women from Kenya, Caroline Kimeu and Judy Onyango, who had different stories to tell. Caroline, at the age of 14, had to stop her education because of the poverty of her family, and escaped becoming a child bride by fleeing to Nairobi, where she worked as a maid. She is now back studying. Judy’s family were impoverished following her father’s death, but the church and friends helped her get education. She now works as a volunteer with an organization that provides education for poor and vulnerable girls called Mirror of Hope.

These inspiring life stories of courageous women of faith who overcame adversity and do great work on all continents serve both as a strong reminder of the invaluable contribution women are making every day to the church and to society in the 21st century, and a pressing call to open up new areas of responsibility for them in the church’s global mission.