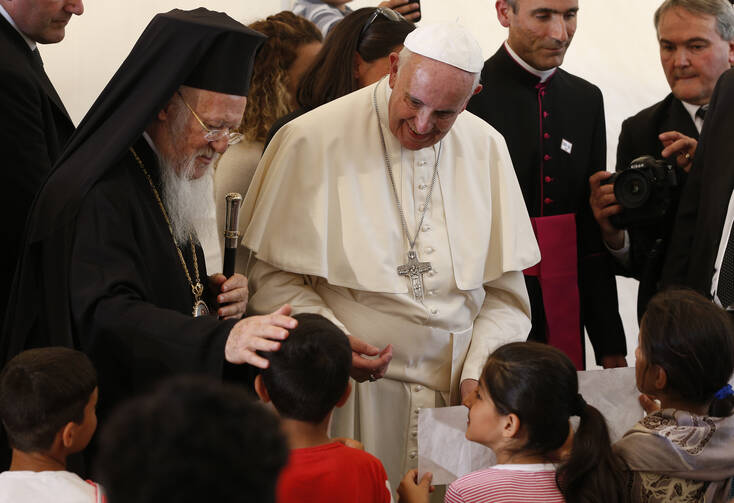 Will the Holy and Great Council of the Orthodox Church be held as planned for the first time since 787 C.E.? This historic event is scheduled to be held on the Greek island of Crete, June 19-26, but it is now uncertain if that will happen.

In early June two of the 14 autocephalous churches—Antioch and Bulgaria—announced they would not participate unless certain questions are resolved beforehand; they asked for the council to be postponed. The Russian Orthodox Church supported them and requested an emergency meeting by June 10 to resolve these questions or else postpone the gathering. The ecumenical patriarch of Constantinople, Bartholomew I, who is organizing the event, rejected both proposals, saying the primates of all 14 churches had agreed the agenda last January, and since there is no agreed procedure for such a postponement, it must go ahead. The Russian Orthodox Church, on the other hand, contest this as an autocratic ruling and decided to hold its own emergency synod on June 10 to decide how to proceed.

Ecumenical Patriarch Bartholomew I is recognized as ‘the first among equals’ in the leadership of the Orthodox Church and called and organized the council. So far everybody has respected his role; it would be difficult for them not to do so. But he does not have the authority to interfere in the internal life of any of the churches. His is a coordinating role, and that has been accepted.

To understand what is at stake at this council, I spoke with Bishop Brian Farrell, the secretary of the Pontifical Council for the Promotion of Christian Unity, who has closely followed this whole matter and is one of the two delegates that Pope Francis, at the invitation of Patriarch Bartholomew, has appointed to the Pan-Orthodox Council. The other is Cardinal Kurt Koch, head of that same Vatican office.

They will attend as ‘observers,’ together with Anglicans, Lutherans, Oriental Orthodox and other Christian denominations. They will not be allowed into the hall when the discussions are taking place but will receive an official briefing each day and, more importantly, will be able to talk with participants. They will participate in the opening and closing ceremonies and remain for the full time the council is in session.

Bishop Farrell recalled Ecumenical Patriarch Athenagoras first came up with the idea for the council in the 1960s, and the planning for it has taken over half a century. Around 400 of the world’s some 700 Orthodox bishops are slated to attend because it was decided to invite 25 bishops (including the head) from each of the 14 churches. But the fact that not all the bishops can participate has led to charges that the gathering cannot be considered a council.

There are six topics on the agenda:

The first five have the unanimous approval of all 14 churches; the sixth (on marriage) does not.

Bishop Farrell explained that the Orthodox Church has a very different system from the Catholic Church. They work by the consensus method, which they understand as unanimous consensus; this means there has to be agreement among all 14 churches to approve anything, even the procedures. So, when it came to approving the council’s agenda, they started with nine items but because of lack of agreement had to eliminate three: autocephaly, the date of Easter and the question of order (its Greek name is ‘taxis’) in the church.

While all six documents are important, he asserted that the fifth is the one of greatest relevance to the Catholic Church: the Relations of the Orthodox Church with the Rest of the Christian World. But he observed:

This text sets out a vision that is very conservative; it insists on the point that the Orthodox Church is the only one, true church. It recognizes that relations with the Catholic Church are hugely important and positive, but there is no recognition of the Catholic Church as church in the proper sense.

Indeed, the Orthodox consider the Catholic Church as “defective,” he said, and in the immediate preparations for the council in synod of the church of Greece the majority view was that “every other body, including the Roman Catholic Church, has gone into heresy.” Consequently:

The atmosphere is very difficult, and we have to wait and see if the reality of the ecumenical relations down these years is recognized or not. Over past decades we have called ourselves ‘sister churches,’ we have cooperated together, and we have made theological agreements and signed them as ‘sister churches.’ But now we have to see whether the tremendously conservative trend that is dominating in some of their churches will prevail.

The conservative block includes Greece, Bulgaria, Georgia and, to an extent, Serbia, he said. But, he emphasized:

We don’t have this problem with the Russian Orthodox, they are quite positive about our relationship with them, but they are less enthusiastic about the theological dialogue. They are hugely enthusiastic about all kinds of collaboration, cultural and so forth. And their official position is that they recognize us as ‘sister churches.’

Bishop Farrell explained that the council is being held in Crete instead of Istanbul (originally Constantinople) because the Russians cannot go or will not go there because of political tensions between Moscow and Ankara after Turkey shot down a Russian plane on its border with Syria. Patriarch Bartholomew chose Crete because the island falls under the jurisdiction of the ecumenical patriarchate.

Asked what he hopes would come out of the council, Bishop Farrell said:

I think it will be important to see whether the opposition that is coming from the more conservative churches to everything can be overcome. They are not talking only about relations with the rest of Christianity; they have problems, too, about the document on marriage. They refuse to recognize the possibility of an Orthodox marrying a non-Orthodox; it’s just not possible. This is especially true in Georgia.

But there are other problems, too, regarding liturgical matters; “Bulgaria, for example, is upset about these matters.”

Then there are problems regarding jurisdiction that are causing real tensions between some churches, Bishop Farrell stated. There is the problem between Jerusalem and Antioch over Qatar, for example. Antioch claims that Qatar has always been under its jurisdiction, but, notwithstanding this, Jerusalem appointed a bishop there without consulting it. The ecumenical patriarch sent a group to mediate, he said, but they are still fighting and could decide not to sit down together at the council, thereby making it absolutely void. “This is so serious,” he added.

Asked what he would welcome or hope for from the council, Bishop Farrell said:

First of all, that the council actually takes place and comes to a conclusion. Secondly, for the benefit of our relationship with Orthodoxy there has to be a breakthrough so that these more conservative and unbending elements in the churches will not dominate. Because if they were to come with a document that actually said that the Roman Catholic Church is not a real church then every possibility of real dialogue would be undermined.

This scenario is “very unlikely,” he commented. Indeed, “they may have to take it off the agenda if they can’t agree, but then we wouldn’t have any document that would support dialogue.”

When it comes to the final approval of the documents, Bishop Farrell said, “each church has just one vote, so each church has to agree.” It is therefore “very complicated,” he acknowledged, “and we have to be attentive not to apply our system.” Indeed, as a result of this process, progress is bound to be much slower, he stated. But if they do hold this council, then he said that could open the doors to a follow-up council, as some hope.

Gerard O’Connell
@gerryorome
Show Comments (
1
)
Comments are automatically closed two weeks after an article's initial publication. See our comments policy for more.
William Rydberg
5 years 11 months ago
Although I know that they are dead wrong about the Holy Roman Catholic Church. I nevertheless pray that this attempt succeeds. Let God be the judge... Mary, Mother of the Church pray for us! Come Holy Ghost, fill the hearts of your faithful and enkindle in them the fire of your love in Jesus. in Christ, Blessed be the Trinity...