Waiting for The Vote on The Synod's Final Report 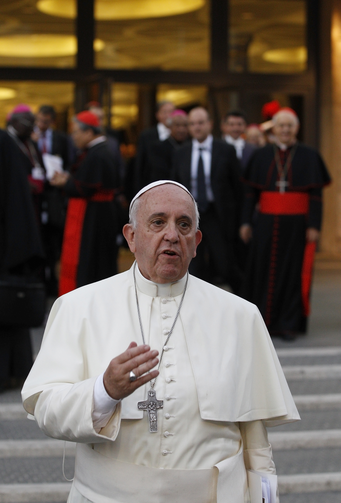 The atmosphere is tense around the Vatican on the eve of the vote on the Final Report of the extraordinary synod on the family.  It has revived memories of what happened in the early days of the Second Vatican Council, those who were here at that time tell me.

A number of synod fathers have let it be known that they are ready to vote against parts of the Final Report, or even the whole text, if it is not to their liking in terms of doctrine. The entire text, and presumably also the individual parts, will require a two-thirds majority in favor to gain the approval of the 191 synod fathers (most of them bishops) who have had the right to vote.

Many synod fathers see the vote as the first real verification of where the division lies in the synod on the key issues and, in particular, on the possibility of the admission of the divorced and remarried to the sacraments of reconciliation and Eucharist. Up to now the only indication of support for, or opposition to this proposal has come from the language groups.

Judging from the ten language reports and other sources, it would seem—the conditional is necessary here—that the opposition is not strong enough to eliminate this topic, at least for now, and so the issue will remain on the table and be further studied and discussed throughout the Church between now and the October 2015 synod.

Pope Francis, for his part, has been at all the plenary assemblies of the synod, except for the Wednesdays when he had public audiences.  He arrived early every day and greeted participants as they entered the synod hall. He also joined them at coffee breaks, chatting with whoever wanted to speak with him.

He spoke only once during the two weeks, and that was at opening session on the first day when he encouraged the synod fathers to speak freely and boldly, from the heart. After that he just listened to what participants had to say. He never again intervened.  He listened attentively to the individual speakers, and their sometimes passionate, even critical speeches (one or two even targeted at him). He observed the internal dynamic carefully; and sometimes took notes. But he never said anything.  Not one word!

Ever since his election as pope, Francis has enjoyed extraordinary inner peace. He said it came to him at the time of his election and has never left him. This inner peace was evident throughout the two weeks of the synod.  Nothing that was said disturbed him.  He had unleashed a real experience of "synodality," a “walking together” and “listening to the Spirit,” something the bishops—most of them had been appointed over the past 35 years—had never experienced at a synod before, but by and large have welcomed.

Pope Francis watched the synod participants open up, speak freely and even get heated on certain issues. It was good that people got worked up over some questions, the German Cardinal Reinhard Marx remarked at a press briefing in the Vatican on October 17 when asked about the tensions inside the synod hall.  “We need to be able to quarrel positively with each other,” he stated. “People who want to be loyal to the Church need to be heard,” Marx added. He said he had noticed during the synod discussions that “coalitions based on pastoral experiences” emerged, that cut across geographical and even cultural divides, and considered this as something very positive.

Cardinal Marx is president of the German Bishops Conference which, by an overwhelming majority vote, wants the Church to adopt a more open, pastoral and merciful approach regarding the admission of divorced and remarried Catholics to the sacraments.

“The debate has been rich” at the synod on this and other topics, he said, but he had also seen that “many defend the image of a Church that doesn’t want to lose anything”.  He believes, on the other hand, that we need to reach out to people wherever they are, and especially to those who are wounded or in problem situations as Pope Francis is encouraging believers to do.

“Saying that doctrine will never change is a restrictive view of things,” he stated. “The history of the Church over the past 2000 years... shows that doctrine doesn’t change, it develops.”  He quoted the renowned English theologian and cardinal, Blessed John Henry Newman in support of his statement. Marx believes the same could happen in relation to some of the questions under discussion.  Here too, there could be a development in the Church’s understanding, and also in its pastoral practice. “It’s not a question of black or white, all or nothing. The human condition is more complex than that,” he observed.

Like everybody else, Cardinal Marx is waiting with anticipation to read the synod’s Final Report. He will see it tomorrow morning when he arrives at the synod hall, and in the afternoon he will vote on that text which, he said, “is a document that will accompany us to the future.”

He reminded the media—which has been present at this event in bigger numbers than at any synod in the Vatican since Paul VI established this organism of collegiality on 15 September 1965—that “the process is not finished with tomorrow’s vote, it continues until the next synod in October 2015.”