Why the Vatican hopes an agreement with China is within reach 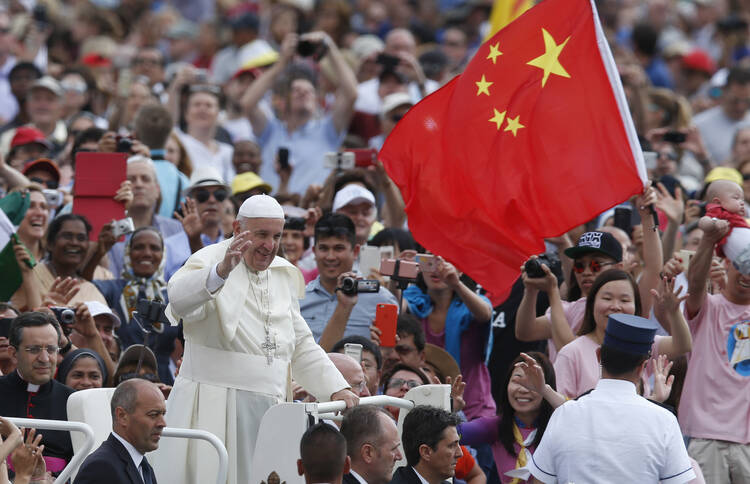 The Vatican Secretary of State, Cardinal Pietro Parolin, today confirmed that “there are many hopes and expectations for new developments and a new stage in the relations between the Apostolic See and China.”

He affirmed that this would benefit not only Catholics in China and China itself but also contribute to world peace or, as he put it, “benefit an ordered, pacific and fruitful coexistence of peoples and of the nations in a world that like ours is torn by many tensions and many conflicts.”

The Italian cardinal is the Vatican’s top diplomat and the man Pope Francis, five months after his election, chose to be his secretary of state, entrusting him with the goal of normalizing relations between the Holy See and the People’s Republic of China. Those relations were broken in 1951 when the communist government led by Mao expelled the pope’s representative.

RELATED: Moving towards a Beijing-Vatican breakthrough on bishops?

Now, after more than two years of dialogue between the two sides, Cardinal Parolin confirmed that there are now high hopes in Rome that an agreement with China is within reach. Speaking this morning at a seminary in northern Italy, he gave his most extensive comment yet to explain what is happening and to prepare Catholics worldwide for a development in Sino-Vatican relations that is now on the horizon.

The Vatican made the text of his talk available to the press soon after its delivery, and the Vatican daily, L’Osservatore Romano, gave an extended report on it highlighting its importance.

In his talk, Cardinal Parolin clarified why the Vatican is keen for this normalization of relations with China, something that has raised many questions inside and outside the church. “It is important”, he said, “to underline with force this concept: the hoped-for new and good relations with China—including diplomatic relations, if God so wills—are not an end in themselves nor a desire to reach who knows what ‘worldly’ successes.”

Instead, he said, these hopes for new relations “are thought out and pursued, not without fear and trembling because here one is dealing with the church, which is something of God, only in so far as they are ‘functional’—I repeat— for the good of Chinese Catholics, for the good of the whole Chinese people and for the harmony of the entire society, in favor of world peace.”

The cardinal affirmed that Pope Francis, like his predecessors John Paul II and Benedict XVI, “knows well the burden of suffering, of misunderstanding, often of martyred silence that the Catholic community in China carries on its own shoulders: it is the weight of history.”

Indeed, he said, that “besides the external and internal difficulties”, Pope Francis “also knows how alive the desire for full communion with the successor of Peter is, what progress has been made, what live forces do by giving witness to the love for God and the love for neighbor, and especially to the weakest and neediest, which is the synthesis of all Christianity.”

There are an estimated 12 million Catholics in China today but as a result of government policies over the past 60 years they are divided into two communities: an officially recognized one (under the Chinese Catholic Patriotic Association) and ‘underground’ or clandestine one, which is perhaps slightly more numerous.  Everyone recognizes that there is a great need for reconciliation between the two communities, as Benedict XVI stated in his letter to Catholics in China in 2007.

In his talk today, the cardinal emphasized this urgent need by stating that “especially in this Jubilee [Year] of Mercy”—which closes on November 20—Pope Francis “knows and encourages reciprocal pardon, reconciliation between brothers and sisters that have experienced division and the effort to grow in understanding, collaboration and love.”

Then, in words that appeared to be addressed to Catholics worldwide—some of whom have questioned the direction the Holy See is taking in its relations with China—the cardinal added, “We are called to accompany with affectionate closeness, respect, humility and, above all, with prayer this journey of the church in China.”

He declared that this journey involves “writing an unprecedented page of history, looking forward with trust in divine providence and healthy realism, to ensure a future in which Chinese Catholics can feel themselves profoundly Catholic, still more visibly anchored to the solid rock which, by the wish of Jesus, is Peter, and (at the same time) fully Chinese, without denying or diminishing all that which is true, noble, just, pure, lovable, and honored that their history and their culture has produced and continues to produce.”

He acknowledged however that the Sino-Vatican dialogue is not easy and is beset with problems, but ones that he believes can be overcome. “It must be realistically accepted that there is no lack of problems to be resolved between the Holy See and China, often generated because of the complexity of the problems and their different positions and orientations,” he stated.

But, he added, these problems “are not totally dissimilar to those” which the first apostolic delegate to China, the Italian archbishop (later cardinal) Celso Constantini, helped overcome in the early half of the last century as he worked for diplomatic relations between the Holy See and China.

Cardinal Parolin, in fact, drew on the memory and work of that Italian prelate as the frame in which he presented his overview of the current state of the Sino-Vatican dialogue and the hopes for the longed-for mutual agreement. He recalled the remarkable work Archbishop Constantini did to distance the Catholic church from the colonial powers, promoting a church community that was both truly Chinese and Catholic by ordaining the first native Chinese bishops and encouraging Pius XII to create the first Chinese cardinal. He held up his Italian predecessor as an inspiration for the Holy See and the church today in its relation with China.

The Vatican cardinal concluded his talk by inviting Catholics to entrust “the journey that remains to be walked” to the mother of Jesus, who is venerated as “Our Lady Help of Christians” at the shrine of Sheshan, not far from Shanghai.

Gerard O’Connell
@gerryorome
Show Comments (
2
)
Comments are automatically closed two weeks after an article's initial publication. See our comments policy for more.
William Rydberg
6 years 5 months ago
The Chinese people will undoubtedly be better off through harmonious relations with the See of Peter. Such wonderful news! Pray much to Jesus for the great Chinese People in Christ, Blessed be the Holy Trinity
JOHN WORTHLEY
6 years 5 months ago
How timely! Mother Teresa dreamed of this. May her canonization be a funnel of grace for realizing reconciliation during this jubilee year of mercy.