The Vatican Defends the Appointment of Chile's Bishop Barros 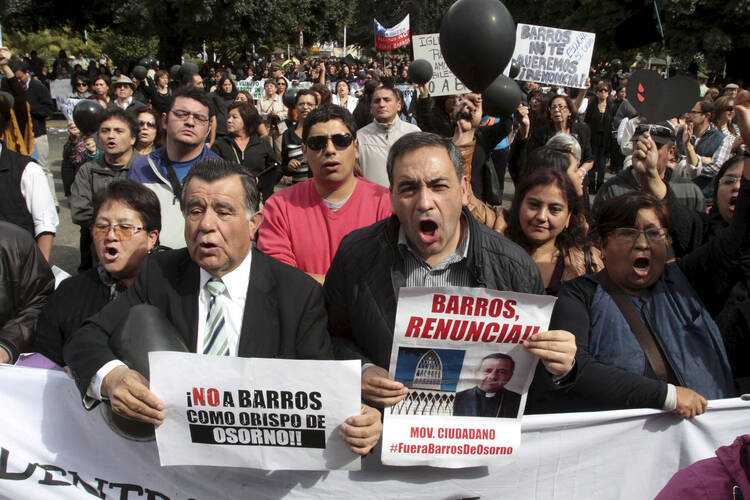 The Vatican, in its first public statement on the matter, has revealed that the decision to appoint Mgr. Juan de La Cruz Barros as bishop of Osorno, Chile, was made after the Congregation for Bishops had “carefully examined the prelate’s candidature and did not find objective reasons to preclude the appointment.”

Barros was installed as bishop of the Chilean diocese on March 21, in a ceremony marked by controversy as well as open and even violent contestation between supporters and opponents, also inside the cathedral. Some 30 priests and deacons have called for his resignation, in a letter to the nuncio. Members of parliament too have protested.

The Vatican made its position known in a brief and concise written declaration from the Deputy-Director of the Holy See’s Press Office, Father Ciro Benedettini. Issued on March 31, ten days after the installation of Bishop Barros, it was published in Italian, English and Spanish, and stated: “Prior to the recent appointment of His Excellency Msgr. Juan de la Cruz Barros Madrid as bishop of Osorno, Chile, the Congregation for Bishops carefully examined the prelate’s candidature and did not find objective reasons to preclude the appointment.”

Critics and opponents have charged that Barros had known and been involved in the cover-up of the abuse of minors by Father Fernando Karadima, a well-known charismatic priest in Chile who influenced many people. Barros has flatly denied such allegations, and insisted that he did not know about the abuse until much later, in 2010, when the story became public. The Congregation of Bishops, headed by the Canadian cardinal, Marc Ouellet, clearly believes him.

A criminal case against Karadima failed because of the statute of limitations. In 2011, however, a Vatican investigation concluded he was guilty of the abuse of minors (boys) over several years, and sentenced him to a life of prayer and penitence. He is now 84 years old.

Informed sources told America’s correspondent that in the light of the considerable amount of evidence at its disposal, the Vatican concluded that there is no legal foundation to the allegations made against Bishop Barros and, consequently there was no objective impediment to his appointment as pastor of the Osorno diocese.

A number of the lay members of the Papal Commission for the Protection of Minors, set up by Pope Francis in 2014, have expressed perplexity and concern at the pope’s appointment of Bishop Barros, but sources in Rome say it is far from clear what degree of information they actually had at their disposal when they responded to press queries on the subject, apart from that which is already in the public domain.

On the other hand, it is indeed hard to believe that Pope Francis would have appointed Bishop Barros to the diocese of Osorno if he, or indeed any of his close advisors, had the slightest doubt about the charges made against the Chilean prelate regarding his alleged complicity or involvement in a cover-up of the abuse of minors by Father Karadima.

The stakes are too high in this case, particularly given the zero tolerance policy adopted by Francis since becoming pope in relation to the abuse of minors by priests, and his ongoing insistence on holding bishops and priests accountable for any abuse or cover-up. In this case, a source said, the pope has sought to be just. Those who believe otherwise surely have the obligation now to produce solid evidence to substantiate their allegations.

Gerard O’Connell
@gerryorome
Show Comments (
6
)
Comments are automatically closed two weeks after an article's initial publication. See our comments policy for more.
Bill Mazzella
7 years 10 months ago
This appointment raises two questions. The first is that it is becoming clear that Francis takes a personal interest in each appointment as the Ordinary of a diocese. What did Francis see as special gifts to serve in this priest. Especially in view of the accusations. The second is why would Francis stay the course on a priest who has thirty priests objection to his becoming a bishops of a diocese. Not only are some bishops and priests in Chile objecting, but at least four members of the commission on sex abuse appointed by Francis. Thereby threatening the effectiveness of that commission. This looks like the first real crisis Francis is facing about his own actions.
ed gleason
7 years 10 months ago
Barros in accepting the appointment despite the uproar, actually thinks his promotion is more important than Francis' credibility, the Chilean Church, and his own diocesan clergy and laity.. Just another of the "me' generation??
John Barbieri
7 years 10 months ago
This appointment suggests that the pedophile scandal and the concerns of the laity are of little or no interest to the hierarchy.
Martin Eble
7 years 10 months ago
Of course. If the "hierarchy" were really concerned about the pedophile scandal, it would skip trials and go directly to the hangings.
Jack Rakosky
7 years 10 months ago
We should evaluate this case in terms of the four “political principles” which Francis proposed in THE JOY OF THE GOSPEL for the Common Good and Peace of a Society. The First Principle is that "time conquers space". It is important to initiate processes, e.g. the Commission on sex abuse that will bring about change from which there is no return. Francis has stacked that commission with laity and women rather than bishops and priests. They have decided that accountability of bishops in this matter is a high priority. Francis thinks it is a mistake in general to give priority to occupying spaces, e.g. to decide all the cases as if the policy change was already there. The Second Principle is that “conflict should not be denied or avoided.” In this case there is a clear conflict between the accountability of bishops and their usual way of proceeding. Commission members have clearly voiced their concerns about how decisions on now being made. And this particular decision appears to have wide opposition in Chile among bishops, priests, and laity. The Fourth Principle is that there is an innate tension between the global and the local. In this case there is a global movement to recognize sexual abuse by the clergy and to bring about accountability of bishops. However many countries don’t think sexual abuse is very important. The risk of being too local is that Chile will continue to make appointments as if this international movement did not exist. The risk of being too global is to make only squeaky clean appointments in regard to this criterion rather than choosing the best person. The Third Principle brings things together: Realities are more important than ideas. The realities of the sexual abuse crisis, the lack of bishop accountability, and the realities of bishop appointments. As with the Synod, I think we are seeing Francis' willingness to let political processes take their course.
Martin Eble
7 years 10 months ago
This appointment may mark the turning point, at last, in the Church’s reaction to the “abuse scandal”. Canon Law, like American criminal law, assumes innocence until proof of guilt. The personal feelings and impressions of thirty priests and deacons are not proof of guilt. The Papal Commission for the Protection of Minors has no mandate regarding the selection of bishops, no access to the Congregation for Bishops’ deliberations, and no authority to examine the files upon which the Congregation for Bishops relied. The personal feelings of one or more lay members of the Commission should not be a matter of public record in any case. The prolonged witch hunt in which an allegation was as good as solid evidence, in which “trials” took place in the media, in which good priests’ careers were destroyed, loving parents fingerprinted, and all the rest of the trappings of a PR approach aimed at looking vigorous rather than dealing with a genuine but rare problem, may be finally coming to an end. Good.