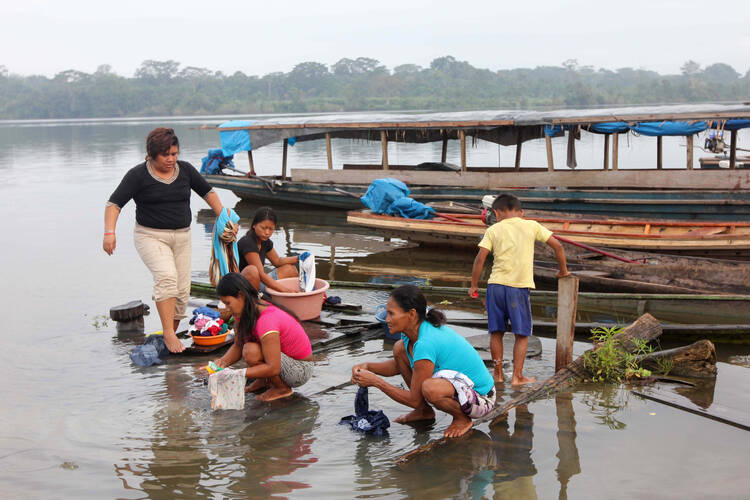 The Vatican has thrown its weight behind an important new Latin American Church transnational network (REPAM) created to protect the peoples and respond to the challenges to them and to the natural environment in the Amazon region that stretches across nine countries of that continent.

Cardinal Peter Turkson, the President of the Pontifical Council for Justice and Peace, made this clear on March 2 at a press conference in the Vatican when he presented this project along with a panel of other speakers including the Peruvian bishop Pedro Ricardo Barreto Jimeno S.J., who is president of Department of Justice and Solidarity of the Latin American Bishops Conference (CELAM) and a driving force behind this initiative.

REPAM, the acronym for this transnational Church network, stands for “Red Ecclesial Panamazonica” – (Panamazon Ecclesial Network). It was set up in Brazil, September 2014, as a project of the nine Churches of the Amazon region under the umbrella of CELAM, and with the blessing of the Holy See. It is a follow up to Pope Francis’ visit to Brazil and his important talk to the CELAM board in July 2013 in which he spoke about the Amazon region.

The network involves the Catholic Churches and many of its institutions in the nine countries that are part of this region: Brazil, Colombia, Ecuador, Guyana, Peru, Surinam and French Guyana, Peru and Venezuela. This collaborative initiative also involves lay organizations and the religious orders currently working in the Amazon region.

“Amazonia is at the heart of the Church,” Bishop Barreto Jimeno told the press. It contains the world’s most extensive tropical forest, and its biggest river. Geographically the Amazonian region is shared by Guyana, Surinam and French Guyana (0.15%), Venezuela (1%), Ecuador (2%), Colombia (6%), Peru (13%) and Brazil (67%). It is home to 390 indigenous peoples and 137 isolated peoples, who speak 240 languages.

“REPAM came into existence to respond to important challenges” Cardinal Turkson stated. What is at stake is nothing less than “safeguarding the lives of the many communities (in the Amazon region), and the more than 30 million people (living in them).” He said the lives of these communities and people “are threatened by pollution, by the radical and rapid change of the eco-system on which they depend” and by “lack of protection of their fundamental human rights.”

Turkson said their very existence is threatened and their dignity is disregarded when, for example, there is uncontrolled deforestation, or when mining projects or intensive agricultural operations are conducted without consultation or any involvement of the local populations. Barreto Jimeno added that the Amazon region is “devastated and threatened by the concessions given by States to the transnational corporations.” He reminded the media that Amazonia is a living system that functions as a climatic regional and global stabilizer, producing one-third of the rains that nourish the earth, but is now seriously threatened.

REPAM has been conceived as an agile transnational instrument that can intervene to the challenges in different areas, and in a variety of ways, Cardinal Turkson explained. It can take action, for example, in the fields of justice and legality, and in the promotion and safeguarding of human rights. It aims to promote cooperation between the Church and public institutions, and to contribute to the prevention and management of conflicts. It encourages the study and dissemination of information, and promotes equitable, inclusive economic development and the responsible use of natural resources in a context of solidarity. It seeks to foster respect for creation, and the preservation of the traditional ways of culture and ways of life of the various peoples.

A key backer of this initiative is Brazil’s Cardinal Claudio Hummes, who is close to Pope Francis. He was not able to arrive in time for the press conference but sent a recorded message in which he explained that through REPAM the Church “wishes to be close to the people of this region, with courage and determination, especially to the poorest, the excluded, the discarded, the forgotten and the wounded.”

Hummes said the network “aims to unite the efforts of the Church (in the nine countries) in favor of the responsible and sustainable care of this whole Amazon region so as to promote its integral good, human rights, evangelization, as well as the social, cultural and economic development of its people, especially the original indigenous peoples”

He drew attention to the fact that in this region “life is shown in its mega-diversity as a gift of God for all” but, today, “it is being ever more devastated and threatened.” Increasing deforestation, big agricultural projects, hydro-electric plants, the extraction of oil and other rich minerals, as well as monoculture and climate changes are putting “at grave risk” both the natural surroundings and the dignity and self-determination of the populations living there, especially of the indigenous peoples, the poor people who live by the rivers, the peasants, the descendants of the Africans brought here, and even the poor who live in the local cities.

For all these reasons, Cardinal Hummes said, the churches in the region decided to create this network (REPAM) so as to join forces together, support and encourage each other, and “to have a prophetic and ever more important voice at the international level” whenever the question of Amazonia and its peoples is at stake.

The Brazilian cardinal concluded with an appeal to the media: “Do not forget Amazonia, it is crucial for the future of humanity!”

Caritas Internationalis, with its 165 member organizations worldwide (including Catholic Relief Services in the USA), actively supports REPAM and participated in its creation, Michel Roy, its French-born Secretary General told the press. Many NGOs are also committed to supporting and collaborating with REPAM.

Representatives of the nine Latin American Churches, as well as organizations and associations collaborating with REPAM took part in a two day meeting in Rome, also to give greater visibility to this new venture, which Cardinal Turkson said, “could serve as a model for local churches in other continents which are facing similar challenges.”

Indeed, the Church in Africa could well follow suit, as I learned from BishopFridolin Ambongo, a Capuchin Franciscan, from the Democratic Republic of the Congo (DRC). Cardinal Turkson invited him toparticipate in the REPAM meeting in Rome.

This dynamic Congolese bishop is President of the Catholic Bishops Commission on Natural Resources in the DRC and is also President of their Commission for Justice and Peace. As is well known, the DRC has mineral reserves that are sought after by many countries and transnational corporations, and the hunger for these minerals has led to ongoing conflicts and great suffering for the local people.

Bishop Ambongo, who has received threats for his work in this whole area, told me that he had come to the REPAM meeting to see if that model could be adapted for his and other countries that share the equatorial forest in that part of Africa, where the challenges are similar to this in Amazonia. He is considering exploring the possibility of creating a similar kind of Church network involving the Churches in the DRC, Congo Brazzaville, Gabon, Equatorial Guinea, Cameroon, the Central African Republic and Angola.

It is worth noting that the REPAM meeting in Rome, and the possibility of a similar kind of network in Africa, has come as Pope Francis is finalizing his encyclical on ecology which he expects to publish in June or July. He hopes that this text can make a significant contribution to the international discussion ahead of the important United Nations Conference of Climate Change, COP21, that will open in Paris on 30 November 2015.