After initial turbulence, the Synod on the Family settles into discussion in working groups 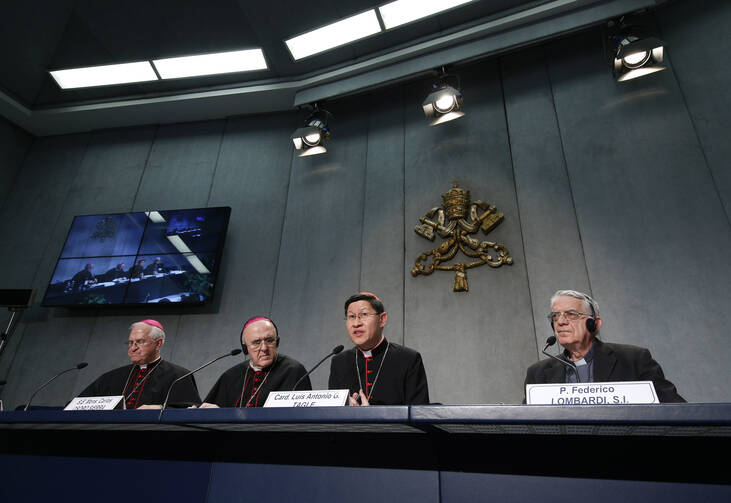 The Synod on the Family reached its cruising altitude with the publication of the reports from the 13 language groups on Friday, Oct. 9.

The early part of the journey was somewhat turbulent. To begin with, there was some confusion among participants about the new process that was the result of a reform approved by the pope on Sept. 7, which not only allocated far more time than in previous synods to discussion in language groups, but also limited the time each synod father could speak for in the plenary assembly to three minutes.

A certain amount of turbulence was also caused by various “conspiracy theories" that were being floated through the air here and elsewhere, alleging that the secretary general (Cardinal Lorenzo Baldisseri) and the special secretary of the synod (Archbishop Bruno Forte) were somehow engaged in a manipulation of the process and the elections. Cardinal Pell added to the turbulence by challenging the composition of the special commission established by Pope Francis to draft the synod's final document. That same day a letter was given to the pope signed by a group of synod fathers, all cardinals, including Pell, that complained about the process of elections to the leadership of the groups and the way the special commission was established, while informed sources say at least one other - a Prefect of one of the main Vatican congregations - backed them behind the scenes (see note at end of this article). Cardinal Baldisseri clarified the process on the morning of the second day, and the captain of the plane, Pope Francis, intervened unexpectedly to calm the atmosphere by urging the 270 fathers to give no credence to the "hermeneutic of conspiracy" but, instead to trust each other and work together for the good of the church

The turbulence subsided soon after Francis spoke, and that afternoon the synod fathers and the 48 other participants (including 18 married couples) began discussing Part I of the working document (the "Instrumentum Laboris") in the different language groups.  Not surprisingly, it took a little time to find an acceptable working dynamic because, as English working group "C" reported, they felt “somewhat uncertain by the task presented” to them. By the third day, however, participants had settled down as the synod plane glided forward.   They had "adjusted" to the new process as Italian "A" stated.

By the end of the first week, it became abundantly clear that the vast majority of the synod fathers are truly satisfied with the process that allows them much time to discuss the issues in depth in the language groups.  French "A" expressed “great satisfaction” at this, as did French "C," while the fathers in French "B" felt united as they walked together with the church “to read reality with the eyes of faith and the heart of God.” Spanish "B" concurred and hailed “the great freedom with which participants can discuss the themes.”

The first week revealed not only the ethnic but also the theological and cultural diversity of the synod fathers, which French "A" described as “a unique experience of Catholicity.”  It also highlighted the fact that some appear to be married to the deductive method while others are tied to the inductive one. And while Pope Francis has called on all of them to approach the discussion with open hearts and minds, to speak boldly from the heart, to listen "with humility" to each other, and to listen to what the Holy Spirit is saying to the church, one cannot but be struck by the fact that a minority of fathers have stated publicly that they have already made up their minds on certain questions even before the discussion begins. On some issues they claim “there is nothing more to discuss.” That position has led other fathers to ask, “Why then have we come to the synod?” It remains to be seen whether some will experience a "conversion of heart" over the next two weeks.

One of the more interesting developments in this first week was a proposal, that appeared both in individual interventions and group discussions, suggesting that perhaps some questions could be best dealt with at the local level, and do not need to be decided at the Vatican.

English working group "C," for example, reported that “the sense of diversity led us to ask if this or that analysis or argument would be best dealt with at the local or regional level rather than at the global level. There was decentralizing tendency in much of our discussion; yet paradoxically this did not undermine our sense of unity in the task.” French "C" took up and reported the suggestion of one of its members “that bishops’ conferences be given certain power to allow their pastors to be Good Samaritans.”

If this proposal were to be adopted by the plenary assembly and incorporated into the final document that could open new horizons for addressing several questions.

Highlighting some of the many positive elements at the synod, several fathers have commented on the "fraternal spirit" that prevails in the groups, and the fact that several groups were able to approve by consensus the "modi" (that is, proposed amendments to the working document).  It remains to be seen if this can happen too when the 13 groups discuss Part III of the working document, which contains the hot button issues, on Oct. 17, 19 and 20.

It should be mentioned too that in spite of the seemingly tranquil flight after the pope spoke on the second day, the synod plane again hit slight turbulence two days later when it became known that the secretariat of the Polish bishops’ conference violated the synod’s rules by publishing brief summaries of the speeches of a number of selected fathers on its website without first gaining permission from all of them. The bishops had been given clear instructions in writing before the synod that neither the contents of the interventions nor any personal attribution was to be made public. In the plenary session the following day, in the presence of the pope, Cardinal Baldisseri, the secretary general of the synod, came down hard on this breach of the rules, specifically naming the Polish bishops’ conference as the violator.

That same afternoon, the synod moved into the second and perhaps easiest stage of this "journey together" with presentation of Part II of the working document.  Participants will discuss this in the language groups on Oct. 12 and 13, and present their results to the plenary assembly on the morning of Oct. 14.

After that, the synod will turn its attention to Part III of the working document where a heated debate is expected on such vexed questions as what pastoral approach the church should take to cohabiting couples, whether divorced and remarried Catholics may be allowed to receive Communion under certain conditions, and how the church should address homosexuality and homosexual families.

The synod plane has traveled one third of the way, the journey is still long, and one cannot exclude further turbulence in route, especially when it comes to discussion of Part III of the working document, Oct. 19 and 20.  One cannot exclude turbulence either when it comes to the discussion of a draft text of the final document in the plenary assembly on Oct. 22. One thing is certain: the energy that the fathers have brought to this discussion will insure that this plane will not run of out fuel! It is due to touch down with the vote for approval of the final document on Oct. 24.

Note: A letter said to be from the 13 synod fathers (all cardinals) to the pope was published in Rome by the Vaticanist, Sandro Magister, on Oct. 12., with his comments: http://chiesa.espresso.repubblica.it/articolo/1351154?eng=y However, Father Lombardi told a press briefing that same day that two of the cardinals -  Scola and Vingt-Trois - have denied signing it. Lombardi did not wish to comment on the letter since it was sent to the pope.