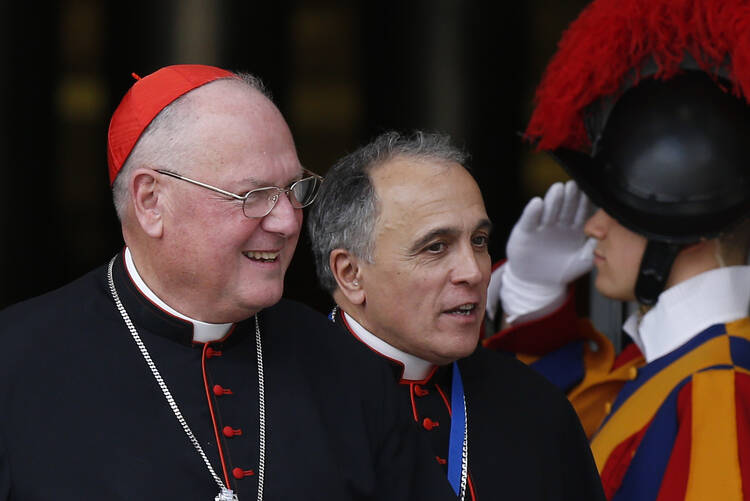 Thirteen cardinals—including Cardinals Di Nardo and Dolan—sent a letter to Pope Francis on the opening day of the Synod on the Family in which they challenged or raised serious objections to decisions taken or approved by him regarding the organization and the conduct of the synod.

In it, they expressed “concerns” in relation to two important aspects of the synod, which they claim are shared by other synod fathers: the basic working document or “Instrumentum Laboris,” which they consider inadequate, and the synod procedures which they allege “lead to a predetermined conclusion.”

The letter was published in Rome one week after it was given to the pope, by Sandro Magister, a well-known writer on Vatican affairs, who is not much in sympathy with the direction of this pontificate, and who was suspended from the Holy See’s press office for his involvement in breaking the Vatican embargo on the pope’s encyclical, "Laudato Si'."

On Oct. 12,  Magister published the text of the letter and the names of 13 cardinals who he claimed had signed the letter. Within hours of publication, however, four of those publicly denied signing the letter: Cardinals Erdo (Hungary), Piacenza (Italy) Scola (Italy) and Vingt-Trois (France). Federico Lombardi, S.J., the director of the Holy See Press Office, would not comment on the letter.

America has learned from informed sources that 13 cardinals did indeed sign the letter, including four not named on Magister’s list:  Di Nardo (United States), Njue (Kenya), Rivera (Mexico) and Sgreccia (Italy). The full list of signatories is given below.

In their letter, the cardinals wrote that some consider “the synodal procedures” as “lacking openness and genuine collegiality.” They charged that “the absence of propositions and their related discussions and voting seems to discourage open debate” and called for the restoration of the system of “crafting of propositions to be voted on by the entire synod.” They also stated that “voting on a final document comes too late in the process for a full review and serious adjustment of the text.”

The 13 cardinals, all of whom are synod fathers, challenged the composition of the special commission (of 10 members from all continents) set up by the pope to draft the final document, and said, “the lack of input by the synod fathers” on this “has created considerable unease. Members have been appointed, not elected, without consultation.”

They asked that “anyone drafting anything at the level of the small circles should be elected, not appointed.”

The cardinals went on to express “concern that the new procedures are not true to the traditional spirit and purpose of a synod,” and claimed that “a number of fathers feel the new process seems designed to facilitate predetermined results on important disputed questions.”

“Finally and perhaps most urgently,” they said, “various fathers” have expressed “concern that a synod designed to address a vital pastoral matter – reinforcing the dignity of marriage and family – may become dominated by the theological/doctrinal issue of Communion for the divorced and civilly remarried.”

If this were to be the case, they said, it would “inevitably raise even more fundamental issues about how the church, going forward, should interpret and apply the Word of God, her doctrines and her disciplines to changes in culture.”

Pope Francis' response to this and other questions came the following morning. He spoke after the synod’s secretary-general, Cardinal Lorenzo Baldisseri, clarified the process. Cardinal Baldisseri recalled that in past synods the final report was drafted by three or four members—the relator, special secretary and the secretary general with help of others—but in 2014 Francis decided to expand the groups. The cardinal stated that those drafting the final document were never elected by the synod. He also made clear that the moderators and rapporteurs of the language groups are in fact elected by the members of those working groups, as established in the procedures for the synod; they are not appointed by the secretariat.

Pope Francis confirmed the procedures of the synod when he spoke. He explained that the 2014 synod never challenged the church's teaching on marriage and the family, and that it is not up for debate at this synod either. He told the synod fathers that the three fundamental documents for discusion at this synod are the final report of the 2014 synod, plus his own introductory and concluding speeches to that assembly. He restated yet again that the synod cannot be "reduced" to the single issue of whether divorced and remarried Catholics can be admitted to the Eucharist. He concluded by warning the synod fathers against giving in to “the hermeneutic of conspiracy” (or conspiracy theories), which, he said, “is sociologically weak and spiritually unhelpful.” He encouraged them to trust each other, and to engage in “a profound discernment to seek to understand what the Lord wants of his church.”

The names of the 13 signatories are, in alphabetical order:

- Carlo Caffarra, archbishop of Bologna, Italy, formerly the first president of the Pontifical John Paul II Institute for Studies on Marriage and Family;

- Gerhard L. Müller, former bishop of Regensburg, Germany, since 2012 prefect of the congregation for the doctrine of the faith;

- Wilfrid Fox Napier, archbishop of Durban, South Africa, president delegate of the synod underway as also at the previous session of the synod of October 2014;

- George Pell, archbishop emeritus of Sydney, Australia, since 2014 prefect in the Vatican of the secretariat for the economy;

- Robert Sarah, former archbishop of Conakry, Guinea, since 2014 prefect of the congregation for divine worship and the discipline of the sacraments;

Gerard O’Connell
@gerryorome
Show Comments (
6
)
Comments are automatically closed two weeks after an article's initial publication. See our comments policy for more.
Sandi Sinor
6 years 8 months ago
There have been updates to this story. Apparently four Cardinals so far have publicly stated that they did NOT sign the letter reported in a story in Rome. Two other cardinals said that they did sign a letter, but that the contents are not as reported. The reporter released what he claims is the text of the letter, but did not release an image of the letter. The updates have been posted at the Crux website, the National Catholic Reporter, website, and the Commonweal website, as well as by Religion News Service.. http://www.religionnews.com/2015/10/12/top-cardinals-send-sharp-warning-letter-pope-francis-reforms/ The journalist is known as a harsh critic of Francis/.ROME — An Italian journalist banned from the Vatican press office for publishing the pope’s encyclical on the environment too early has dropped another bombshell: A letter to the pope allegedly signed by 13 cardinals raising concerns about left-wing manipulation of the process at the bishops’ synod.There’s just one problem: Four of the cardinals deny they signed it. And a source says that although such a letter exists, the report of its content isn’t accurate.The Vatican spokesman, the Rev. Federico Lombardi, declined to comment at Monday’s press briefing, saying that since it was a letter supposedly for Pope Francis, “it’s up to him to choose what to say about it.”But he did say that two of the reported signatories had denied signing the letter. And then, as the briefing was underway, a third issued a similar denial. Later, a fourth also denied involvement to Crux.The cardinals who said they didn’t sign the letter are Péter Erdõ, archbishop of Esztergom-Budapest, Hungary, and relator general of the synod; Mauro Piacenza of Genoa, Penitentiary Major at the Vatican; Angelo Scola, archbishop of Milan, and André Armand Vingt-Trois, archbishop of Paris.
Carlos Orozco
6 years 8 months ago
Strange, is it not, that those whom called for more collegiality for decades, are now fine with predetermined results. "...Finally and perhaps most urgently, various fathers have expressed concern that a synod designed to address a vital pastoral matter – reinforcing the dignity of marriage and family – may become dominated by the theological/doctrinal issue of Communion for the divorced and civilly remarried. If so, this will inevitably raise even more fundamental issues about how the Church, going forward, should interpret and apply the Word of God, her doctrines and her disciplines to changes in culture. The collapse of liberal Protestant churches in the modern era, accelerated by their abandonment of key elements of Christian belief and practice in the name of pastoral adaptation, warrants great caution in our own synodal discussions." Final paragraph of the mentioned letter. Brutally honest.
Helen Smith
6 years 8 months ago
The latest list of signers does not have Cardinal DiNardo yet there is no mention in the press that he denied signing the letter. What's up?
Bruce Snowden
6 years 7 months ago
I want to go on public record saying I absolutely trust Pope Francis' insights in all he says and does. I believe he is ministering under the active inspiration of the Holy Spirit, faithfully attentive to the Spirits directions. On the other hand I have absolutely no confidence in the insights of the thirteen Synodal Fathers who opposed the Holy Father. I believe they are dull to the Spirit's promptings, having ministries they feel are more righteous than those of the Vicar of Christ. No doubt they are well meaning, but unfortunately with ears somehow tightly closed to the gentle Coo of the Spirit Dove permeating the Church.
Tim O'Leary
6 years 7 months ago
Bruce - I think you are being too judgmental in your post. Several points to consider: 1) The Holy Father is a strong advocate for collegiality and the synodal process, and he has encouraged input and advice, 2) This written advice was meant to be private, 3) we have no certainty the advice he received was of this content or tone, 4) the release by the journalist (and even this article) could be intended to undermine the pope and/or his Cardinal advisors. So, I think it uncharitable to denigrate the cardinals (some of who were not even giving this advice). Bottom line is, the pope seeks input, listens and then prays before he decides. And the Holy Spirit, not any human being, the Holy Father included, is the safeguard of doctrine. As to process and any non-doctrinal judgments, the Church claims no particular immunity from miscalculation or error.
Bruce Snowden
6 years 7 months ago
Tim, Sorry if I come across too judgmental. I try to avoid falling into that pit, but sometimes the winds of emotion may push me in. In my posts I try to speak the truth always objectively, but perhaps this time too unmindful of charity and for me that's a mistake. However, I do essentially stand by what I say, even if how I said it was flawed. Thanks for pointing it out.