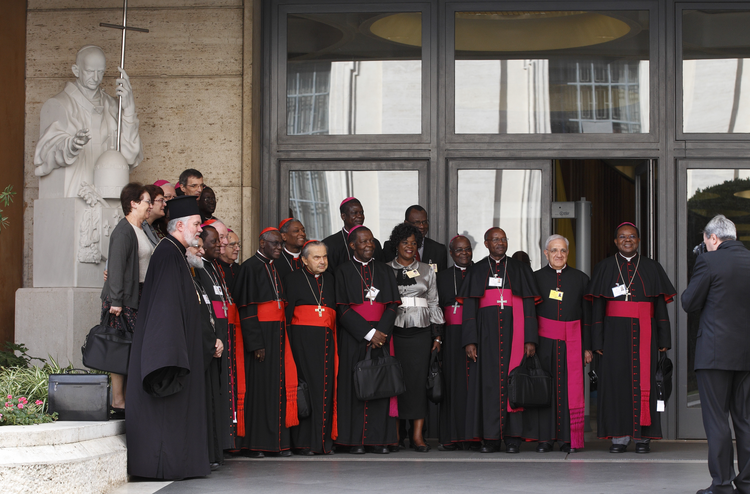 Right now a lot of work is being done behind the scenes at the synod of bishops in the Vatican as a team of eleven synod fathers, assisted by expert staff, sift through the hundreds of amendments and additions to the synod’s interim-Report on the family, and begin drafting its Final Report.

Given the negative reaction by many synod fathers to the interim report published on Oct. 13 which surprised people across the globe by its openness and positive approach to homosexual persons and couples either cohabiting or in irregular unions, the final report is expected to be a more carefully honed and balanced document. It will serve as the basic text for discussion on the family in local churches and dioceses throughout the world between now and the October 2015 synod.

This morning, October 16, the modifications to that interim text were presented by the rapporteurs of the 10 language groups (3 English, 3 Italian, 2 French, and 2 Spanish) to the plenary assembly and the synod’s secretariat. The synod decided to release to the media the summary reports that synthesized those modifications.

It is clear from these summary reports that the interim report offers the basic frame for the Final Report, but there will be substantial changes to that earlier text.

It’s understood that the positive, welcoming, open “tone” that was a hallmark of the interim report will also characterize the final text. The synod fathers wish to use positive, attractive language that conveys the beauty of the reality of Christian marriage and offers encouragement and hope to people, especially to the young.

Many synod fathers expressed concern that the interim text had focused too much on the problem situations of couples and had not highlighted in an adequate way the beauty of Christian marriage or the effort being made by countless couples, often in heroic loving ways, to live their vocation faithfully in today’s world. For this reason several groups have asked for a real affirmation of Christian marriage and a positive recognition of, and encouragement to faithful Christian couples in the final text.

Reading the ten reports one gets the impression that there was a clear tension at the synod between those who adopted the inductive approach and those who feel more comfortable with the deductive method.

There was also a tension in how different synod fathers viewed the relation between truth and mercy in pastoral practice. Nevertheless groups reaffirmed their wish to express “welcome, acceptance and love for those in difficult and painful circumstances.”

Several groups called for a substantial presentation of the Scripture and Church teaching on marriage and the family in the final text, so as to underline more clearly the Catholic doctrine on both. One group wants the whole text to have a “Christocentric” focus.

Some wanted the final report to emphasize the Church’s “prophetic role” in affirming the Christian family in today’s world, while at the same time showing herself as “a mother” concerned for the wellbeing of her “wounded children.”

Various groups want the final text to underline the importance of married couples being open to having children, and seeing them as the fruit of their love and “a gift of God.” A few groups said there is a need to revisit Paul VI’s encyclical, Humanae Vitae, while some said abortion should be mentioned in the final document too.

Some were unhappy with the use of “the law of gradualism” in the interim report and asked to have it removed from the final text; others want greater care in its use and definition.

Most reports want greater clarification in the text when it speaks about cohabitation, irregular situations and homosexual unions. The interim text gave the impression that the synod (and therefore the Church) looked at these various situations in a favorable light but several groups – in the modifications they have submitted - want the Final Report to speak only of ‘positive elements’ in relation to the persons living in these situations rather than in the situations as such. At least one group wanted the final report to boldly use language like ‘sin’, ‘adultery’ and ‘conversion.’

Several felt the paragraphs relating to homosexual persons in the interim report had not been well written, and were open to misunderstanding and misinterpretation in regard to Catholic teaching. They want them radically revised, but the final text is still expected to retain three key words: “respect,” “welcome” and “value.”

There was consensus at the synod that the union between persons of the same sex cannot be equated with marriage, but they agreed that the church must be open to, and care for children in such same-sex unions.

The reports reveal a clear division of opinion on the vexed question of the admission of divorced and remarried Catholics to the sacraments of reconciliation and the Eucharist. Three groups have come out firmly against this possibility, while others have asked for greater clarification or further study on this and on various penitential paths leading to this.

A number of groups want improved and accelerated procedures for declaring the nullity of marriages, and this will be reflected in the final text. A few groups called for further study here.

Groups, with synod fathers from Africa, asked for the question of polygamy to be addressed more fully, and some proposed further study regarding the pastoral approach to polygamists who convert to Christianity. At least one group proposed that the role of woman be highlighted more in the final text.

A few groups have asked for the final report to denounce the grave problems of prostitution, female genital mutilation and the exploitation of minors for sexual purposes and labor, all of which hit families.

Two or three groups asked for the final report to include reference to the essential role of families in evangelization and the transmission of the faith, and to highlight their missionary vocation.

The pastoral approach of “accompaniment” for couples, also in civil marriages or irregular situations, gained strong endorsement from several groups, but with the caveat that such accompaniment should not be understood as signifying endorsement or approval these situations.

The modifications—and there are hundreds of them—are now in the hands of the team of 11 synod fathers tasked with drafting the Final Report.

Originally, and following past practice, a team of three persons had been assigned to that work: the Relator General—Cardinal Peter Erdo (Hungary), the Special Secretary—Archbishop Bruno Forte, and the General Secretary, Cardinal Lorenzo Baldisseri. But the Pope significantly added 8 other synod fathers to assist them, thereby ensuring representation from all continents.

The Drafting XI is scheduled to complete its daunting task within 48 hours, and present the Final Report to the plenary assembly on Saturday morning, Oct. 18. The 191 synod fathers will vote on the text late Saturday afternoon. It requires a two-thirds majority to be approved.