The Synod Is On The Home Stretch 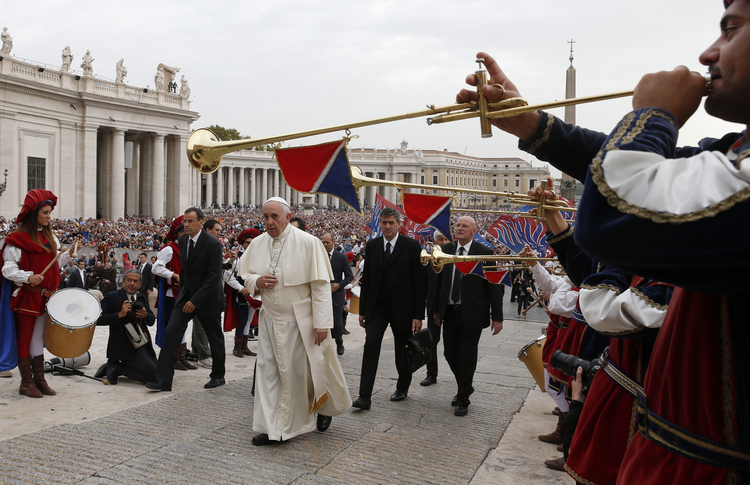 The synod is on the home stretch. The drafting of the Final Report begins tomorrow, Oct. 16. The finished text will be presented to the plenary assembly on Saturday morning, Oct. 18, and voted on that afternoon. There is a sense of great expectation, even some anxiety, as participants wait to read that important document.

It’s clear the Final Rext will be different from the interim report. That was a working document, a basis for discussion, a text inviting revision and improvement, a text that summarized the main ideas of the contribution of the 253 participants during the first week. Written in a spirit and style reminiscent of the Second Vatican Council’s document on “The Church in the Modern World,” the interim-report sparked global interest because of its open, welcoming approach to homosexual persons and it’s looking for positive elements in persons cohabiting or in irregular unions. This provisional text, which was not approved by the synod or by the pope, provoked considerable negative reaction from several synod fathers and calls for major changes to a text some considered quite unacceptable.

Now, the key question is this: how will the Final Report differ from that interim text? That’s what many were asking, inside and outside the synod hall, as participants concluded their work in the 10 language groups (3 English, 3 Italian, 2 French and 2 Spanish) this evening, and submitted their amendments and new additions to that interim text.

Some initial answers were provided at a Vatican briefing by the moderators (chairpersons) of English group “C” - Archbishop Joseph Kurtz (President of the U.S. bishops' conference) and of Spanish group “B” –Cardinal Lluis Martinez Sistach (Archbishop of Barcelona, Spain), and the relator (rapporteur) of Italian group “B” – Archbishop Salvatore Fisichella (President of the Pontifical Council for the New Evangelization).

The Spanish cardinal stated that the interim report was “an unbiased summary,” but the document needed much more work and this was the task of the language groups. They did it, he said, in a spirit of fraternity and with a pastoral approach.

Archbishop Kurtz said his group wants “a deepened and improved” Final Report that communicates “a message of hope” and “restores confidence in people” about marriage. In the U.S., he said, people are “at the mercy of statistics” and in terms of marriage commitment they often start with “a self-fulfilling prophecy of doom.” His English group wants the final text to highlight the importance of “the witness of sacrificial loving relationships.” They also want to make sure it emphasizes that “all our words are totally welcoming” and that “our pastoral outreach is based on sacred Scripture and the church’s teaching” and reaches “to where people are.”

Some synod fathers had criticized the interim report for focusing more on the problem situations of broken families or irregular unions rather than on the solid Christian marriage experience of people. Cardinal Sistach and Archbishop Fisichella said their groups wants the Final Report to highlight “the beauty of Christian marriage.”

Those same groups have proposed that the final text should state that the annulment of marriage process must be free of charge, so that it may be accessible to everybody and that the church be freed from the suspicion that money counts here.

Fisischella’s group want the final document to recognize families that adopt children, and to emphasize that adoption is “an act of great charity and love.”

Both Kurtz and Sistach said their groups had referred to Paul VI’s encyclical, Humanae Vitae, about respecting the dignity of people, and its ‘yes’ to the gift of faithful love that is open to life, as well as its "respect for conscience" (a "well formed conscience”) when it comes to the question of birth control. Fisichella’s group emphasized the need for formation of couples about the natural means of birth control, which is almost boycotted today.

Asked if in their opinion, based on the discussion in their respective groups, the Final Report would retain the positive approach of the interim text that looks for the positive elements in unions that are not in accordance with church teaching, all three said they expected it would, though with some greater precision or fine tuning.

Fisichella’s group expects “a refinement” in this part of the interim report because the concept of “living together” is ambiguous, and there’s a need for clarification to see whether such situations are characterized by elements such as ‘stability’ and ‘fidelity’ that the church recognizes as virtues and which can be seen in Gospel terms as ‘seeds’ on the path to the Christian ideal of marriage.

From the comments of these three prelates, and others that I have spoken to, it would seem that the section of the interim report which speaks about “welcoming homosexual persons" (Numbers: 50, 51, 52) will be considerably revised, perhaps even re-written. Sources say some statements could be eliminated as they lack nuance and give a wrong understanding of the church’s teaching and pastoral approach.

Archbishop Kurtz said that his group here made an effort “to improve and clarify the notion of welcome,” so that it is close to church teaching and pastoral practice.

In the coming 48 hours the Relator General, the Special Secretary, the General Secretary and the six synod fathers appointed by the pope to help them will produce the text of the synod’s Final Report, taking into account all the amendments and additions. They will then present it to the plenary assembly on Saturday morning, Oct.18. That afternoon the 191 synod fathers will vote on this text and, presuming it gains the two-thirds majority that is required, it will be given to Pope Francis, and later sent to the local churches worldwide.