Synod Hears Calls for Church to Change its Language 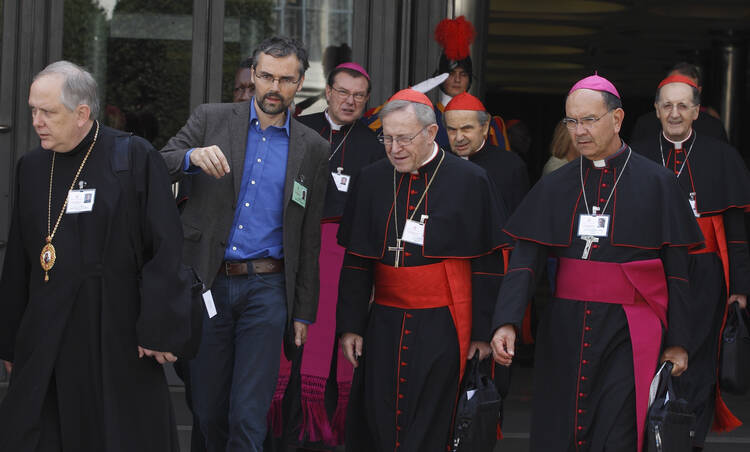 The synod has just begun but there are already early signs that many aspects of church teaching and praxis are coming under scrutiny, with demands for change, including a change in the language it uses.

Seventy synod fathers spoke in the first 24 hours, raising many issues including the need for the church to change its language in certain areas and to show greater respect for people than is at present the case. “Our language needs to change,” several participants said.

Some called on the church to stop using such expressions as “living in sin” when referring to couples who are in what it considers ‘irregular unions,’ and to avoid the expression “intrinsically disordered” when referring to homosexuality, and not to say people have “a contraceptive mentality,” Father Thomas Rosica, Chief Executive of Canada’s Salt and Light Catholic TV channel Canada, told reporters at a press briefing in the Vatican, Oct. 7.

Rosica, who is present at all the sessions, reported that some of the synod fathers had observed that “marriage is seen as being filtered in harsh language through the church” and asserted that “this does not help bring people to Christ.”

He did not reveal which synod fathers had called for these changes because the current rules do not allow any such attribution.

Ron and Mavis Pirola from Australia, one of the 13 married couples attending the two-week gathering, also spoke about church language but from another perspective. Married for 55 years, they told the synod on the first day, “Our faith in Jesus was important to us. We went to Mass together and looked to the church for guidance. Occasionally we looked at church documents but they seemed to be from another planet with difficult language and not terribly relevant to our experiences.”

The Australian couple’s damning comment on the language of church documents actually echoed what had been reported from several countries in responses to the questionnaire that preceded this synod.

Pope Francis too has intervened on the question of language, though at an entirely different level. Breaking again with past praxis, he has abolished Latin as the language of the synod and replaced it with Italian, the language mainly spoken in the Vatican and understood by a great many of the synod fathers. Cardinal Peter Erdo, the Relator at the synod, revealed this with a great sense of relief; the pope’s decision had saved him the painful task of having to read his hour-long keynote addresses in the language of Cicero and Virgil.

The question of language was only one of the 11 or more topics raised by the synod fathers during the first 24 hours.

In their briefing Fathers Rosica (for English), Federico Lombardi (for Italian) and Manuel Dorantes (Spanish) listed at least 10 other themes that have emerged so far in the early interventions including: the synod—everyone is pleased that the pope has called this synod on the family, and also that he held a pre-synod global survey; respect for “the law of graduality” in Christian life; hope—how can the church convey a message of hope about marriage and family life to the modern world?; pastoral practices—examples of these in local churches regarding preparing for marriage and supporting the family.

They also listed the following topics: the family as the basic cell of society and of the Church; marriage is multifaceted today—different kinds of family situations exist, inter-religious marriages, marriage supported by local customs and traditions, polygamy, the difficult and often dramatic situations of families in the Middle East (including persecution) and in the Balkans, the impact of immigration and poverty on families; exegetical questions regarding the interpretations of certain texts in the Gospels and in St Paul’s writings; and the missionary role of the Christian family; the need for a biblical vision of the family.

England’s Cardinal Vincent Nichols told the press briefing on Oct. 7 that many ideas have surfaced but it is too early to have an overall picture. He recalled that Pope Francis had said, “We have to be patient and let the picture emerge gradually.”

He expressed happiness that the synod is structured much better than in the past; from the beginning it has got participants to focus on specific themes. “This is extremely helpful,” he stated.

Moreover, he said, “there’s a very lovely spirit in the synod hall, and a lightness of atmosphere which enables people to speak from pastoral and personal experience more than from academic studies. Bishops speak as priests, and there is a sense of opening and walking together,” he said. He hailed this as a very good start.

Gerard O’Connell
@gerryorome
Show Comments (
7
)
Comments are automatically closed two weeks after an article's initial publication. See our comments policy for more.
Bill Mazzella
8 years 1 month ago
Sounds like a lot of good things happening. Let the Holy Spirit dwell among God's people and so many good things can happen. It will not be easy. We pray that justice and mercy will prevail.
Jeffrey Fehn
8 years 1 month ago
Does anyone wonder how they pick the people to give their testimony in front of the synod? Who chose these folks who have been married 55 years and thought Church documents "were from another planet?" The Church documents weren't relevant to their experience? Really? Whose fault is that? The authors of the documents, or maybe their pastors? Are these people planted or what? We should understand that the outcome of a synod has a lot to do with who is organizing it and who is allowed to speak.
E.Patrick Mosman
8 years 1 month ago
Changing language was a feature in George Orwell's 1984 and the Obama administration is noted for its practice, e.g."workplace violence", instead of "islamic terrorist attack" and "undocumented alien" instead of "illegal immigrant." The great Chinese philosopher Confucius said 2,400 years ago when asked what would be his first action if he were placed in charge of the government of China: "It would certainly be to correct language. If language is not correct then what is said is not what is meant. If what is said is not what is meant, then what ought to be done remains undone. If this remains undone, then morals and acts deteriorate. If morals and acts deteriorate, justice will go astray. If justice goes astray, the people will stand about in helpless confusion. Hence, there must be no arbitrariness in what is said. This matters above everything." The Church should think twice before following Orwell's 1984 and Obama into the land of "helpless confusion".
Jerry Monroe
8 years 1 month ago
Cicero and Vergil, yes. You could do worse. And Augustine, and Ambrose, and Aquinas. (Remember them?) If it is painful, that would only be because we have ignored the teaching of the Saint we just canonized, John XXIII. See http://www.vatican.va/holy_father/john_xxiii/apost_constitutions/documents/hf_j-xxiii_apc_19620222_veterum-sapientia_lt.html
Steven Krause
8 years 1 month ago
I'm not so apprehensive that the choices of participants are intended to skew the synod towards a particular outcome. Any grouping that invites both Cardinal Kasper and Cardinal Burke clearly intends to allow diverse opinions. As for who is at fault if the couple didn't understand the documents -- I suppose it depends on the intentions of the writer. Theology has a technical vocabulary, like all intellectual pursuits. This allows concise communication and great precision of thought, but only when speaking to those who share that vocabulary. If the author intended to communicate with other professional theologians, then technical language is appropriate, and it is the task of the local clergy or other professional ministers to "translate" those documents into language the non-professionals can understand. If the author intended to reach the general public directly, then perhaps simpler language would have been better.
Michael Barberi
8 years 1 month ago
I agree that the Synod seems to be off to a great start. Setting the atmosphere is important for a Synod like this and the issues impacting the family. Pope Francis's approach is clear: everyone can speak without the fear of some type of reprisal. The atmosphere of the 2014 Synod on the Family is very different compared to the 1980 Synod. When the Church uses language such as: people in irregular marriages/unions "are living in sin", or that the majority of married couples who responsibly use artificial birth control have a "contraceptive and anti-life mentality", or people born with an innate same-gender orientation/inclination have an "intrinsic and objective disorder", convey the belief, erroneous some say, that such moral descriptions are the last word or the only word, and the absolute moral truth with certainty. There are many issues to be discussed over the next few weeks, and this is only the first of many steps that are necessary if the Church is going to institute a better pastoral theology that the majority of Catholics will understand and receive. Let the Holy Spirit blow where it wills and may all members of the Synod be open to its guiding light.
Charles McNamee
8 years 1 month ago
Jesus' "Good News" was that the Kingdom of God is within you[Mk.1:16]. Within the First Century the message of the evangelists became "Jesus is the "Good News". Later, the Church proclaimed that "The Good News" is the Church. People want an experience of God, not Doctrine and Dogma and words, words words. If the Church doesn't help people to learn to pray, and to serve, and to proclaim God's indwelling, it doesn't get it.