Synod Fathers examine final document, some pushback on the question of conscience 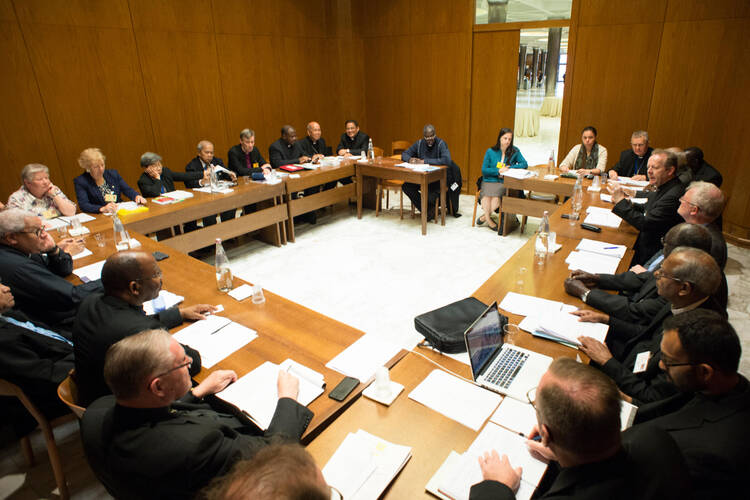 The role of conscience and its relation to the objective moral norm appears to be the most contentious issue in the draft final document of the Synod on the Family. This is what emerged clearly when some 50 synod fathers commented—in oral or written interventions—on the draft in the synod hall on Oct. 23, the penultimate working day of the synod.

The 270 synod fathers received the some 100-paragraph draft final text the previous afternoon, Oct. 22. They studied it that same evening, and returned this morning to the synod hall to give their comments and/or proposals for amendments.

There was general appreciation for the draft final text because the synod fathers recognized that it reflected faithfully what they had said in the group discussions.

Some 10 or more fathers, however, including Cardinals Caffarra, Ouellet, Sarah and Muller, also raised questions in their interventions regarding the role of conscience as it pertains to the moral norm, and the question of the internal forum.

They are concerned that the draft text as it stands opens the way to a different understanding of the church’s teaching on birth control, and to the integration of Catholics who have divorced and remarried into the life of the church and, perhaps under some circumstances, to the Eucharist. They and several other bishops want to exclude such possibilities. Some bishops told me afterwards told me that they detected a common thread in several of these interventions that could suggest a coordinated response on these issues.

This morning, too, several bishops spoke in favor of the draft text and some also referred in a positive way to the role of conscience such as Cardinals Marx (Germany) and Schonborn (Austria). The latter provided historical context for the issues being raised.

A special commission of 10 persons, appointed by the pope, has overseen the writing of the draft final text. This was done based on the reports from the 13 language groups and the 1,350 proposals for amendments to the original working document (“Instrumentum Laboris”) that these groups had submitted in these past two weeks.

Speaking about the draft final text yesterday, the Indian Cardinal Oswald Gracias, who was a member of the special commission, told the press that they had sought to produce “a text that would give a pastoral direction, a text that would be acceptable.” He felt confident that it truly reflects the views of the synod assembly and, he revealed, “we voted unanimously on this draft.”

Cardinal Gracias provided a key insight into the draft final document. “It doesn’t have all the answers,” he said, “The questions will be clear, the answers no.” He explained that this final text “is not addressed to the world, it is for the Holy Father,” who will take it from there.

After this morning’s session, the cardinal joined the nine other members of the commission to decide how to deal with the 50-plus amendments presented today and to see if, and in what way, they may be integrated into the final text. The synod fathers will receive the definitive text tomorrow morning, Oct. 24, and will vote on it, paragraph by paragraph, that same afternoon. The only element of suspense surrounding the vote is linked to how the text has been amended in the light of today’s interventions and whether that revised version can gain the necessary approval.

A number of synod fathers told me that if the definitive text is not substantially different from the text they received last evening and gains the assembly’s approval, then it leaves the doors open for Pope Francis to address the synod’s unanswered questions in a magisterial text.

Tomorrow afternoon the synod fathers will vote on the final document and after that Pope Francis will speak. There is already great interest in what he will have to say.