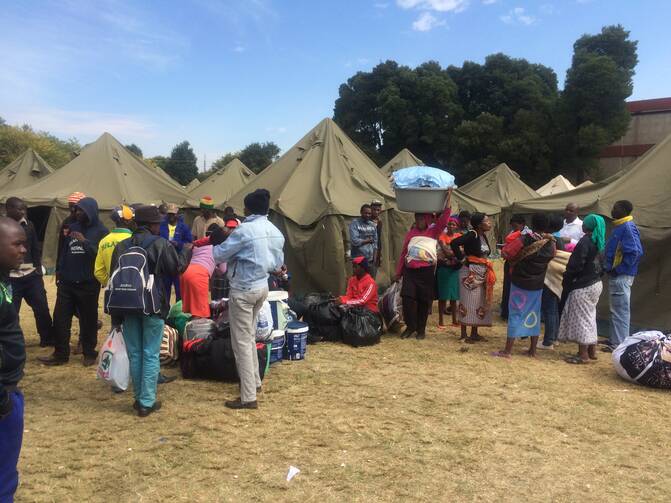 In response to the recent spate of xenophobic attacks the South African Government launched Operation Fiela (a word which means to “sweep clean” or “clear out” the rubbish). Although the national police force led this operation, the military were also brought in to assist. They have conducted raids in various areas identified as “hotspots” in the past few weeks. Over the weekend the operation targeted the Central Methodist Church in downtown Johannesburg. At 03h30 on Friday morning the operation hit the church using apartheid-style tactics: kicking down doors, brandishing automatic weapons and rounding up immigrants who sought refuge in the place of worship.

During the 2008 xenophobic attacks thousands of people found sanctuary there. The minister-in-charge at the time, Bishop Paul Verryn, opened the doors of the church to thousands of foreign nationals who were fleeing for their lives. The church became famous, in a matter of days, as reports spread of how people were sleeping in every corner of the building. Since the deadly attacks in 2008, the church has consistently been a place of hospitality and sanctuary for immigrants. Bishop Verryn soon became a well-known public figure and a champion of the poor, immigrants and human rights. Verryn was transferred from the church last year but immigrants continued to gather at the church and seek sanctuary.

This is not the first time that a church in South Africa has been violated by security forces. In 1972 the world watched, horrified, as the South African Police stormed St. George’s Anglican Cathedral in Cape Town where university students were protesting against apartheid. In the apartheid era police targeted a number of churches. Regina Mundi, one of the most well known churches in Soweto, still bares the scars of such raids. Damage from police tear gas canisters and bullet holes are still visible in the church. In other churches tabernacles were raided because some police personnel thought that tabernacles were places where restricted materials and weapons were hidden. The dignity of the church was violated—something associated with the apartheid regime but not expected in the new democratic dispensation.

Forty years on the same old tricks are back. According to authorities they received a tip-off indicating that there was “criminal activity” (a phrase also used by ministers in the apartheid regime to justify raids in the 1980’s and 90’s) taking place in the Central Methodist Church. This tip-off took place (coincidentally?) after a fresh spate of xenophobic attacks and in a place where, again, immigrants sought refuge from violent attacks against them. The national police, local metro police, military and officials from the Department of Home Affairs arrived with, by all accounts, no warrant. In South African law the police need a warrant to search a property. An exception can be made if there is reasonable ground to suspect a crime is in process and that a warrant would be issued but time did not allow for one to be issued. There was no attempt to speak to church authorities, to perhaps find a way of addressing any issues that may have been a concern for police. In any group there will be some people who do not obey the law, some of the immigrants staying at the church may not have been upright citizens in their host country. Despite this, the raid was disproportionate and the victims were mostly women and children.

The people sleeping in the Church were rounded up and taken indiscriminately by bus to Johannesburg’s Central Police Station. The Central Police Station (previously called John Vorster Square) was also considered a notorious place during apartheid. Many people—mostly black—were arrested, interrogated and beaten at this locale. Reports say that parents were given no chance to dress their children warmly and they were not allowed to take blankets with them. Despite a court order, Lawyers for Human Rights (LHR) were denied access to the detainees after their arrest over the weekend.

The Government believes that Operation Fiela is an answer to eliminating xenophobia in SA. Raiding Central Methodist symbolic suggests that immigrants are the problem—a sentiment that is not uncommon in South Africa. The government, it seems, will do anything to scapegoat foreigners and pin the ills that beset South African society on immigrants. But the complex problem has its roots in the fact that many people in the country are angry, frustrated and hopeless because each day brings a new struggle to survive.

Operation Fiela is a smokescreen for the real issue: a government that is failing its own people. Unemployment in South Africa is at 25 percent—most of the unemployed are young people (66 percent of the unemployed are youth). There is little hope of the economy improving as the country’s power generator, Eskom, cannot keep up with the energy requirements of the country and so rolling blackouts have now become a daily occurrence across the nation. This has a negative impact on local industry and gives foreign investors the jitters. You cannot grow an economy without energy. It’s not, unfortunately, just about generation. The real problem with Eskom (like many state-owned enterprises in South Africa) is the appointment of political cadres to senior positions who want to make big money and make it fast.

The operation will, no doubt, continue and the country’s borders will, we are warned, be more strictly controlled. Many more foreigners will be rounded up and put in detention centres before being sent home. Perhaps the government will violate more places of sanctuary in desperate attempts to hold onto declining political support. It’s easy to scapegoat others than face up to the fact that the current political elites have abandoned their own election by-line—“a better life for all”—and their people. Until corruption is stamped out and a concerted effort is made to lift the majority of poor South Africans from living in abject poverty from their misery, nothing will change. Operation Fiela will not achieve much; it will only victimise many who are already victims and seek sanctuary. It will violate the little that was still sacred.