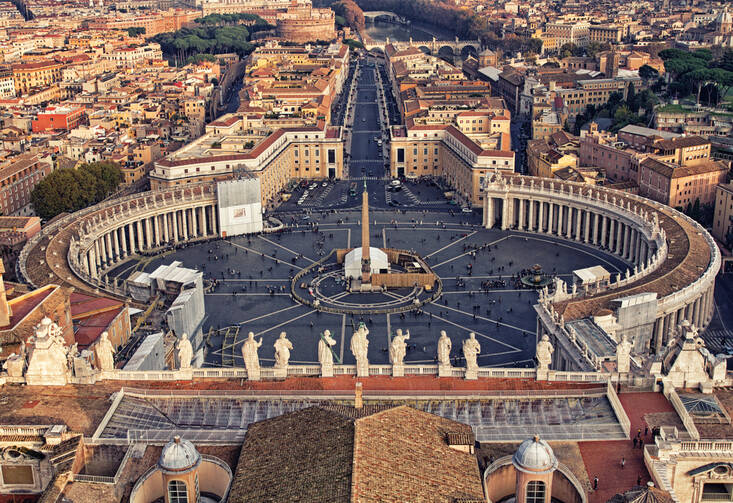 The Synod on the Family is in its final week. Right now, the 318 synod participants (including 270 synod fathers, 18 married couples and the fraternal delegates) are in 13 language groups, discussing the third and final part of the working document.

This third part includes not only the three vexed questions—divorced and remarried, homosexuality and homosexuals, and cohabitation and cohabiting couples—but also many others that are perhaps even more important ones in other parts of the world, such as mixed marriages  (between Christians from different denominations) and inter-religious marriages  (between Catholics and the followers of other religions), indigence and usury, procreation and upbringing, and the role of the family in evangelization.

The discussion will end at 12:30 p.m. on Oct. 20. That afternoon the rapporteurs of the 13 language groups will present the reports from their respective groups to the plenary assembly. They will also present their ‘modi’ (amendments).

The 13 rapporteurs will then sit together and sift through those ‘modi’ (hundreds of them) to identify the ones that obtain consensus. Once this operation is completed they will pass this new batch of ‘modi’ to the commission of 10 persons that Pope Francis has established to draft the final document. Cardinal Peter Erdo, the rapporteur general, is chairman of the drafting.

By Sunday, Oct. 18, the commission had completed drafting the text based on the first two parts of the working document, after incorporating the ‘modi’ received. That part of the work is done.

The commission will work all day on Oct. 21 to draft that part of the final text based on Part III of the working document, incorporating all the ‘modi’ received.

Cardinal Erdo will present the first draft of the final document to the plenary assembly on the morning of Oct. 22. The plenary assembly will discuss this draft text at the afternoon session of that same day. The fathers will then have one last chance to submit observations in writing.

The special commission will meet for the last time on Oct. 23, and incorporate those observations into the draft text, before finalizing it that same evening.

Cardinal Erdo will present the synod’s final document to the plenary assembly on the morning of Oct. 24, and the 270 synod fathers will vote on it, paragraph by paragraph, that evening. The synod’s handbook states that “a strong consensus or at least a two-thirds majority among those voting is required” for the approval of the text. Once approved, it will be handed over to Pope Francis. Many synod fathers said they expect him to make the final document public then, and to announce that he will write a magisterial text next year drawing on the synod’s conclusions.

Gerard O’Connell
@gerryorome
Show Comments (
2
)
Comments are automatically closed two weeks after an article's initial publication. See our comments policy for more.
Bill Mazzella
6 years 6 months ago
As the Synod winds down it might be apt to read the development of Paul VI's commission on the family. Father Bernard Haring, perhaps the greatest moral theologian of the 20th century was a peritus at Vatican II. His words on Humanae Vitae tell us much about the history of this question and how it developed into Humanae Vitae. "Influenced by a few Church Fathers, but above all thanks to the aftereffects of his Manichaean past, the great Augustine taught that marital relations were per se degrading, particularly when engaged in with passion. Intercourse was pardoned and rendered moral only by the express intention of creating new life. But this teaching scarcely affected the bulk of the laity or the pastoral care exercised by priests, since it was not a matter of Church discipline or public penance. Roughly speaking, we can say that up until a time after the Council of Trent, there was no general obligation to confess this “sin.” But beginning with the sixteenth century, all that began to change. Soon a rigoristic tendency came to the fore, vehemently insisting that any act of marital intercourse in which the transmission of life was impeded was a serious sin. Some rigorists held every sexual act to be sinful if it occurred at times or under circumstances in which conception was excluded. But this never became the common doctrine. In the eighteenth century, Saint Alphonsus emphatically taught that the marital act is good in itself, as long as it is the expression of love and/ or serves to promote fidelity. In his Moral Theology, Alphonsus wrote, “Actus conjugalis est ex sese bonus, et hoc est de fide,” or “The conjugal act is good in itself, and this is a matter of faith” (Book VI, treatise vi, n. 900). He added that the confessor should never initiate any discussion of the problem of coitus interruptus. Into our century, most Catholic confessors have taken this advice. And as for those who did not, the faithful could easily avoid them. This relatively peaceful situation in pastoral care was altered at a stroke by the encyclical Casti Connubii, issued by Pope Pius XI in 1930. Casti Connubii was written primarily to counter a declaration by the Anglican Church on responsible parenthood that did not categorically exclude artificial methods of contraception. The preparation of Casti Connubii was a lonely, mountaintop decision— and here we touch on the key problem with Humanae Vitae. Two consultants to the Holy Office, Father F. X. Hürth, S.J., and Father Arthur Veermersch, S.J., actually wrote the text of Casti Connubii. Pius XI toned the text down by stressing the importance of married love. But deliberate contraception was nonetheless declared a crime (crimen). I myself saw the catastrophic consequences of this at missions I preached in the years immediately after War World II. Hundreds of people came to me in confession after being denied absolution at an earlier mission in the 1930s for practicing contraception. They stood for hours outside my confessional once word had gotten around that Father Häring was very understanding on this critical point." Haring, Bernard (2013-05-27). Free and Faithful: My Life in the Catholic Church (Kindle Location 1435). Liguori Publications.
Henry George
6 years 6 months ago
Bill, Thank you for your informative comment.