‘Refugees are not numbers, they are people.’ Pope Francis finishes visit to refugee camp 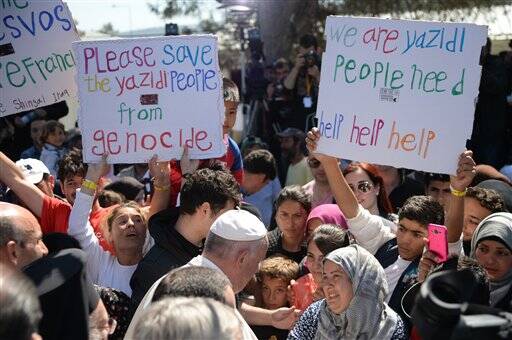 Pope Francis brought his message of love and inclusion during his five-hour visit to the Greek island of Lesbos on Saturday in such a way that it resonated across the world. And in what has become typical for this papacy, he did so by both words and gestures.

While the decision to take three Syrian refugee families—six adults and six minors, all Muslims and victims of the ISIS—with him back to Rome was the most significant and spectacular gesture, there were others too that must not be overlooked.

First, his decision to come to this island, through which 500,000 refugees have transited to Europe in the last 12 months, and which now hosts 60,000 more, was already a particularly strong message to the European Union because it came at a time when its member states were closing their frontiers to these desperate people.

In a second striking gesture, he decided to visit the major refugee camp on the island at Moria, which, as he knew well, has been turned into a detention center since March 20. Its 2,500 guests no longer have freedom of movement. The idea was to come to Lesbos and to the camp was his, but he quickly gained the full support of the Ecumenical Patriarch of Constantinople, Bartholomew I—the first among equals in the leadership of the 300 million strong Orthodox Churches, and of the Primate of All Greece, Archbishop Ieronymous II, in whose canonical territory the island of Lesbos is situated. They joined him in this forceful Catholic-Orthodox ecumenical symbol in the struggle for justice and peace in today’s world.

In further gestures, they first greeted hundreds of refugees, one by one, and then had lunch with a group of the refugees in one of the iron containers that is the Spartan home of all of those in the camp.

Francis’ final forceful gesture came at the port of Mytilene, where he joined Bartholomew and Ieronymous in a memorial service for the countless number of refugees who had drowned in the Aegean Sea over the past year or more, as they embarked on the five-mile hazardous voyage from the beaches of Turkey to the shores of Lesbos and other Greek islands in the hope of finding refuge in Europe. Francis and the other two Christian leaders prayed for the dead, and they cast wreaths into the sea as an act of remembrance.

Before that final ecumenical gesture at the port of Mytilene under a blazing sun and clear blue sky, Francis capped these significant gestures with some powerful words, mainly addressed to the peoples of Europe and their political representatives.

“Europe is the homeland of human rights, and whoever sets foot on European soil ought to sense this, and thus become more aware of the duty to respect and defend those rights,” Francis declared.

Aware of the current backlash in Europe, stirred up by fears stoked by nationalist and sometimes xenophobic forces, Francis said “the worries expressed by institutions and people, both in Greece and in other European countries, are understandable and legitimate.”

At the same time, he said, “we must never forget that migrants, rather than simply being a statistic, are first of all persons who have faces, names and individual stories.”

They sought to reach the homeland of human rights, he said, but “unfortunately, some, including many infants, could not even make it to these shores: they died at sea, victims of unsafe and inhumane means of transport, prey to unscrupulous thugs.”

He praised the Greek people and the residents of Lesbos because in their response to the refugee crisis, they have shown the world that “in these lands, the cradle of civilization, the heart of humanity continues to beat; a humanity that before all else recognizes others as brothers and sisters, a humanity that wants to build bridges and recoils from the idea of putting up walls to make us feel safer.”

The prime minister of Greece, Alexis Tsipras, was standing nearby as the pope spoke, and surely appreciated these words of praise from the pope for his country which has suffered great economic hardship in recent years but nevertheless showed greater generosity to the refugees, than most other European countries.

Today, barriers are being built in a number of European countries to prevent refugees from entering, but Francis reminded everybody that “in reality, barriers create divisions instead of promoting the true progress of peoples, and divisions sooner or later lead to confrontations.”

He reminded the peoples of this continent—and by extension their political leaders—that “to be truly united with those forced to flee their homelands, we need to eliminate the causes of this dramatic situation.”

“It is not enough to limit ourselves to responding to emergencies as they arise,” he said. “Instead, we need to encourage political efforts that are broader in scope and multilateral.”

He spelled out what is required at this dramatic moment in history. “It is necessary, above all, to build peace where war has brought destruction and death, and to stop this scourge from spreading,” he said. But to build peace, he insisted that “resolute efforts must be made to counter the arms trade and arms trafficking, and the often hidden machinations associated with them.” Moreover, “those who carry out acts of hatred and violence must be denied all means of support.”

Pope Francis emphasized that “cooperation among nations, international organizations and humanitarian agencies must be tirelessly promoted” and “those on the frontlines must be assisted, not kept at a distance.”

He reiterated his hope that the First World Humanitarian Summit that will be held in Istanbul next month would produce positive results in this area.

All of this can be achieved, Francis said, “only if we work together.” He called for the search for “solutions to the complex issue of refugees which are worthy of humanity,” and in this context he affirmed that “the contribution of churches and religious communities is indispensable.” He cited his presence in Lesbos, together with the Patriarch and Archbishop, as “a sign of our willingness to continue to cooperate so that the challenges we face today will not lead to conflict, but rather to the growth of the civilization of love.”

Earlier, at the Moria refugee camp, Francis, Bartholomew and Ieronymous signed a common declaration in this very sense. Their joint statement was a significant ecumenical gesture at a crucial moment in history.