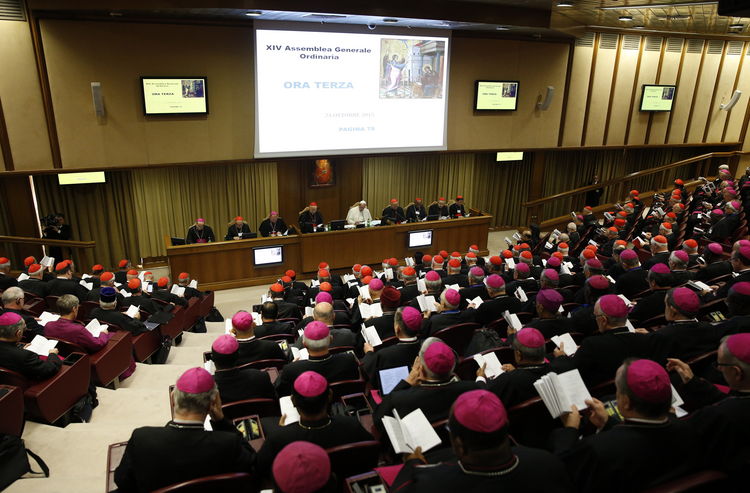 In his closing speech to the synod, Pope Francis hit out hard at those who have sought and are seeking to block or hinder his efforts to get the church to reach out in a merciful and tender way to the many wounded families and people in the world today, and bring them hope and the light of Christ.

He began by saying what the synod was not. “It was not about settling all the issues having to do with the family” nor was it about “finding exhaustive solutions for all the difficulties and uncertainties which challenge and threaten the family.”

Instead, he said, it sought to look at those issues “in the light of the Gospel and the Church’s tradition and two thousand year history” so as to bring families “the joy of hope without falling into a facile repetition of what is obvious or has already been said.” It was about seeing the difficulties and uncertainties facing families “in the light of faith, carefully studying them and confronting them fearlessly, without burying our heads in the sand.”

He said the synod sought to get everyone “to appreciate the importance of the institution of the family and of marriage between a man and a woman, based on unity and indissolubility, and valuing it as the fundamental basis of society and human life.”

Furthermore, he said, the synod was “about listening to and making heard the voices of the families” and their pastors, and showing “the vitality of the Catholic Church, which is not afraid to stir dulled consciences or to soil her hands with lively and frank discussions about the family.”

Francis said the synod sought “to view and interpret realities, today’s realities, through God’s eyes, so as to kindle the flame of faith and enlighten people’s hearts in times marked by discouragement, social, economic and moral crisis, and growing pessimism.”

He said the synod was about “bearing witness to everyone that, for the Church, the Gospel continues to be a vital source of eternal newness, against all those who would ‘indoctrinate’ it in dead stones to be hurled at others.”

His last sentence was particularly incisive, because Pope Francis had watched, for the most part in silence, the efforts of cardinals and bishops to block any movement to change in the church in name of defending church doctrine and tradition. He had seen four senior collaborators who head offices in the Roman Curia—Cardinals Muller, Ouellet, Pell and Sarah—rowing in a different direction to him. He is well aware that there are a number of other cardinals and bishops too who are not working in the Vatican but are also not rowing with him; he watched some of them at work in the synod.

Francis told them that in actual fact the synod has been quite revealing. It had exposed “the closed hearts which frequently hide even behind the Church’s teachings or good intentions, in order to sit in the chair of Moses and judge, sometimes with superiority and superficiality, difficult cases and wounded families.”

The synod had sought “to open up broader horizons, rising above conspiracy theories and blinkered viewpoints” and “to defend and spread the freedom of the children of God” and “to transmit the beauty of Christian Newness, at times encrusted in a language which is archaic or simply incomprehensible.”

During this past three-weeks, he said, “different opinions” were freely expressed at the synod but “at times, unfortunately, not in entirely well-meaning ways.”  Some read this as an allusion to some cutting interventions or to the letter from the thirteen cardinals. Francis didn’t say.

In any case, he said, all that happened during the synod “certainly led to a rich and lively dialogue” and offered the world “a vivid image of a Church which does not simply ‘rubberstamp,’ but draws from the sources of her faith living waters to refresh parched hearts.”

He recalled that at the synod too “we have also seen that what seems normal for a bishop on one continent, is considered strange and almost scandalous for a bishop from another; what is considered a violation of a right in one society is an evident and inviolable rule in another; what for some is freedom of conscience is for others simply confusion.”

Commenting on this, Francis recalled that “cultures are in fact quite diverse, and each general principle needs to be inculturated, if it is to be respected and applied.”

Pope Francis said the diversity that was evident at the synod revealed that they all face the same challenge: “that of proclaiming the Gospel to the men and women of today, and defending the family from all ideological and individualistic assaults.”

At the synod, he said, “without ever falling into the danger of relativism or of demonizing others,” and in the context of the Year of Mercy, “we sought to embrace, fully and courageously, the goodness and mercy of God who transcends our every human reckoning and desires only that all be saved.”

He told the more than 300 participants listening to him that this synod experience “made us better realize that the true defenders of doctrine are not those who uphold its letter, but its spirit; not ideas but people; not formulae but the gratuitousness of God’s love and forgiveness.”

Pope Francis concluded by reminding his brother bishops that “the Church’s first duty is not to hand down condemnations or anathemas, but to proclaim God’s mercy, to call to conversion, and to lead all men and women to salvation in the Lord.”

The synod fathers gave him a standing ovation when he finished speaking. To-morrow they will concelebrate the synod’s closing Mass with him in St Peter’s Basilica. He will preach then, but that is unlikely to be another zinger.