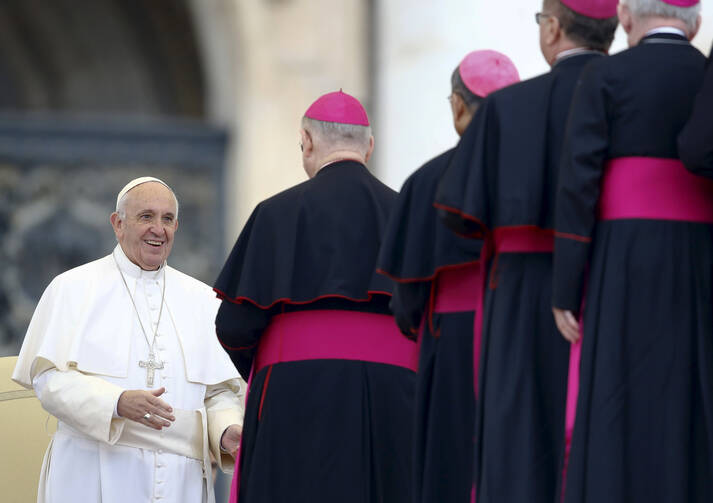 Pope Francis will write an apostolic exhortation as a follow up to the Synod on the Family and “it should not take too long [to arrive],” the Cardinal Secretary of State, Pietro Parolin, told the Italian news agency ANSA.

He said the papal document “will be based on the conclusions of the synod, as is the tradition.” He told this to reporters at the Gregorian University today, after delivering a lecture there for the 50th anniversary of “Nostra Aetate,” the Vatican II document on the relation of the Catholic Church to non-Christian religions.

The cardinal recalled that the synod fathers in their final document, which they approved on Oct. 24, had requested that the pope write a document on the family.

The request came at the end of paragraph 94 with these words:

Concluding this Report we humbly ask the Holy Father that he evaluate the opportunity of offering a document on the family, so that in it the domestic church may reflect always more clearly Christ, the light of the world.

Asked when the document might appear, Cardinal Parolin responded, “This I don’t know, but I don’t think it will take too long. After all, it’s best to strike while the iron’s hot.”

Earlier in the week, the Father General of the Jesuits, Adolfo Nicolàs, S.J., who attended the synod and is close to the pope, confirmed that there would indeed be an apostolic exhortation.

In an interview with Corriere della Sera, a leading Italian daily, he said:

Yes, there will be an Apostolic Exhortation of the Pope. I do not believe it will come out late - after one year - as happened in other synods and with other popes. A year is too much. Experts in management tell me that if eight months pass by without saying anything then people return to the starting point and it’s necessary to re-do the whole process. I believe that Francis will be more rapid in preparing it.

Father Nicolàs noted, “The church has always been weak when it comes to follow-up,” but, “the fruit of the synod cannot just be a document, however good.”

He said, “the fruit [of the synod] is practical: what is done, what happens in the pastoral situation, in the parishes when people start asking. It’s there that one sees [the follow up].”

“For me,” Father Nicolàs said, “the ideal follow-up would consist of particular synods: each bishop when he returns home holds a synod with his people, both priests and laity, to discuss how to realize here the possibilities [opened by the synod on the family].”

Gerard O’Connell
@gerryorome
Show Comments (
5
)
Comments are automatically closed two weeks after an article's initial publication. See our comments policy for more.
John Lord
6 years 11 months ago
Perhaps it was basically written before the Synod as some had claimed? But is a new Exhortation really necessary? How many trees will be destroyed in the printing of it? Shouldn't we be concerned about the environment?! Wouldn't it make more sense just to invite a rereading and acceptance of the clear and authoritative teaching of Familiaris Consortio?
Gay Timothy O'Dreary
6 years 11 months ago
You wasted electricity to leave a carbon foot print to decry destroying trees while being an ugly smarmy writer You show us all too well that youve never studied anything much less FC
John Lord
6 years 11 months ago
If you disagree with something I have written, surely it is possible to make your point without being personally offensive? I have no idea if you are ugly, smarmy and ignorant. If I thought you were I hope I would express myself more charitably than you have. Peace, love, kindness, etc.....
Gay Timothy O'Dreary
6 years 11 months ago
why so thin skinned ? You can dish out the hate but can't take fraternal forrection ala Council of Trent, or is that a schismatic council as well ? Consult Fr Z and report back to us
John Lord
6 years 11 months ago
My response to you didn't suggest I was thin-skinned. I'm not - I just see no justification for gratuitous personal invective. I expressed no hate, and received neither correction nor forrection (fraternal or otherwise) from you to which I might sensibly respond. Your first message, like your second, was nothing other than abusive - indeed, it is contrary to the guidelines given for posting on this site. Why you are suggesting that the Council of Trent or any other Council is schismatic I have no idea. It follows on from nothing I have said. I would have thought that Catholics reading and posting on this site accept the authoritative teaching of all Councils, like all the authoritative teaching of the Church. I do and I assume you do too.