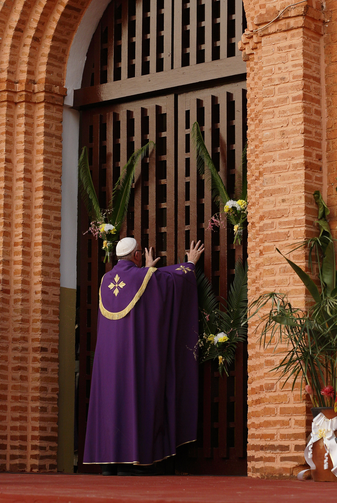 Pope Francis will open the Holy Door in St. Peter’s Basilica on Dec. 8, the 50th anniversary of the closing of the Second Vatican Council, and he has decreed that Holy Doors be opened in all the cathedrals of the world on Dec. 13. The doors are a concrete symbol of the Jubilee of Mercy that extends from Dec. 8, 2015, to Nov. 20, 2016.

Archbishop Rino Fisichella explained this and provided much information regarding the celebration of the Jubilee Year of Mercy at a crowded press conference in the Vatican on Dec. 4, presided over by Federico Lombardi, S.J., the director of the Holy See Press Office. The Italian archbishop is President of the Pontifical Council for the New Evangelization to which the pope has entrusted the organization of this Extraordinary Holy Year.

He said “the celebration of the opening of the Holy Door” in St. Peter’s Basilica will take place on the morning of Dec. 8 when Pope Francis will celebrate Mass in St. Peter’s Square. It will have many features that bring back to mind the Second Vatican Council (1962-65). Thus, for example, the ceremony will be introduced with readings from the council’s four major documents (on the church, the word of god, liturgy and the church in the modern world), as well as with passages read from two very important texts of that historic assembly on ecumenism and religious liberty. Furthermore the Book of the Gospels will be carried in procession at the Mass and placed on the same podium that stood by the altar of St. Peter’s Basilica during all sessions of the council “to make evident to everyone the primacy of the Word of God.”

At the end of Mass, Pope Francis will open the Holy Door in St. Peter’s and pass through it. This very simple ceremony will be transmitted on television worldwide.

The celebration will conclude that same evening with a projection of photographs onto the face and cupola of St. Peter’s taken by some of the world’s great photographers, with images depicting the theme of mercy, humanity, the natural world and climate change. Archbishop Fisichella said this event is inspired by the pope’s encyclical, “Laudato Si’” and is intended to present the beauty of creation as the United Nations summit on Climate Change is being held in Paris (that summit opened on Nov. 30 and ends on Dec. 11).

The Vatican archbishop highlighted the fact that “on Sunday, Dec. 13, for the first time in the history of the Jubilee Years, there will be Holy Doors opened in all the cathedrals of the world.”

This is happening because “Pope Francis has desired that the Jubilee of Mercy unfold above all in the particular churches, and it is precisely for this reason that he wanted to open the Holy Door in the Cathedral of Bangui in the Central African Republic last Sunday, Nov. 29, making it become a world capital of peace and an instrument of mercy.”

“It is a highly significant gesture that makes one understand how much value the Extraordinary Jubilee will have for the life of the church when it is lived within the context of the daily events of our communities,” Archbishop Fisichella stated.

In an interview with "Credere", the official magazine for the Jubilee, , Pope Francis revealed that he would perform a symbolic and concrete work of mercy on one Friday of each month during the Jubilee Year. The Italian archbishop-theologian revealed that the first such gesture would take place on Friday, Dec. 18 when Francis will open the Door of Mercy at a hostel run by Caritas Rome near the city’s central train station where for the past 25 years “persons in grave need, who require our help” have been assisted.

He emphasized the fact that “these gestures will have the character of private visits from the Holy Father, in order to maintain, as much as possible, a personal rapport of closeness and solidarity with the persons or institutions visited.” At the same time, “they will be a testimony through which Pope Francis intends to highlight the major forms of need, marginalization and poverty that are present in society, although these forms of poverty are nevertheless united with a strong solidarity on the part of many people who dedicate their time and energy to consoling and giving daily support to those in need.”

The Jubilee is “a Holy Year to place mercy at the center,” Archbishop Fisichella stated. In this context he recalled that the pope will commission some 800 “Missionaries of Mercy,” these are priests coming from all parts of the world and, beginning of Ash Wednesday, he will give them “the mandate to be preachers of mercy and confessors full of mercy.” Sixty of them come from Italy and 100 from the United States.

He explained that the Holy Father will give these Missionaries of Mercy “the faculty to forgive sins reserved to the Holy See,” and they “will be the sign of the closeness and pardon of God for all.” He emphasized that the Missionaries of Mercy “are appointed exclusively by the Holy Father, and that the faculty of forgiving reserved sins will be given to each one of them personally. No bishop in his own diocese may appoint these Missionaries, nor may he confer faculties that he does not possess.” And, he added, “Anyone wishing to invite the Missionaries for a liturgy, a retreat or a special event can do so by accessing the list that will be made available to bishops.”

Responding to a question, Archbishop Fisichella explained that there are “five reserved sins,” and listed them: the profanation of the Eucharist, the absolution of an accomplice (especially in relation to the Sixth Commandment), the ordination of a bishop without the papal mandate, breaking the seal of confession (that is, revealing what was said in the confession) and physical violence against the Roman Pontiff.

Significantly, in regard to “physical violence against the Roman Pontiff,” the Vatican archbishop explained that this is understood not just as limited to an actual physical attack on the pope, it can also be violence by “words” (verbal violence), that can be like “rocks” and “stones” thrown at the Successor of Peter.

He went onto point out that starting on Dec. 8 the rosary will be recited every day in front of the statue of St. Peter in the square named after him.

The dynamic Italian archbishop went on to provide important information regarding the organization of the Jubilee Year. He drew attention to the fact that that the Vatican has opened a “Pilgrimage Information Centre” at Via Della Conciliation 7, where one can get information regarding Jubilee events and also register for “the reserved walk to the Holy Door” in St Peter’s. (The center will be open every day from 7:30 a.m. to 6:30 p.m.)

He said the Pontifical Council for the New Evangelization has produced a series of pastoral resources to assist people in living the Jubilee Year. These are available in various languages, including English.

The Jubilee Year of Mercy is the first in the era of the Internet and of the social media, Archbishop Fisichella noted, and consequently there is an official Vatican website for this at: www.im.va, which provides a wide variety of information and services.

Note: The full text of Archbishop Fisichella’s presentation can be found here in English.