Pope Francis tells priests: ‘Nothing unites us to God more than an act of mercy.’ 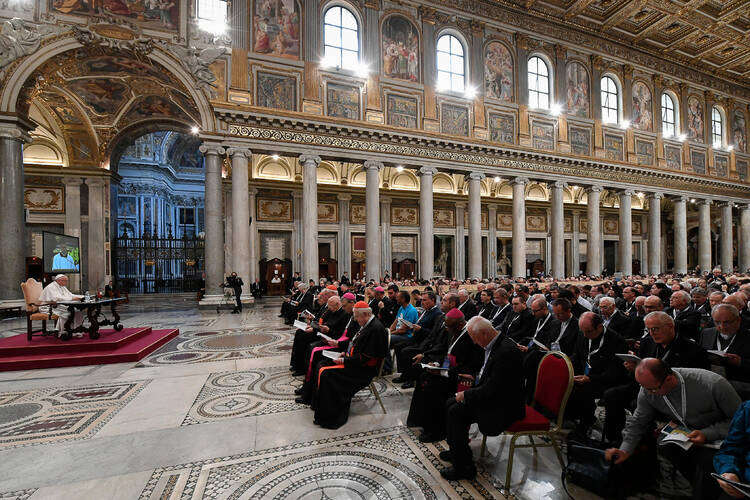 Pope Francis has not written an encyclical on the priesthood yet, but the profoundly spiritual retreat that he gave today on the central place of mercy in the life and mission of a priest could be considered just that.

As a Jesuit in Argentina he frequently gave retreats, and this morning, June 2, he returned to being retreat master when he spoke to thousands of priests and seminarians from all over the world who had come to Rome for the Jubilee of Priests.

He gave three meditations in three Roman basilicas. Speaking this morning in St. John Lateran to clergy resident in Rome, he told them:

Everyone can appreciate what it means to be merciful, to feel compassion for those who suffer, sympathy for those in need, visceral indignation in the face of patent injustice and a desire to respond with loving respect by attempting to set things right. If we reflect on this natural feeling of mercy, we begin to see how God himself can be understood in terms of this defining attribute by which Jesus wished to reveal him to us. God’s name is mercy.

Then drawing on his own Jesuit formation, he told his clerical audience, which included Vatican officials:

I like to use ‘mercy’ as a verb: We have to ‘show mercy’ [misericordiar] in order to ‘receive mercy’ [ser misericordiados]. Mercy joins a human need to the heart of God, and this leads to immediate action.

Nothing unites us to God more than an act of mercy, for it is by mercy that the Lord forgives our sins and gives us the grace to practice acts of mercy in his name. Nothing strengthens our faith more than being cleansed of our sins.

He drew attention to the fact that “mercy can be freely accepted and nurtured, or freely rejected. If we accept it, one thing leads to another. If we choose to ignore it, our heart grows cold. Mercy makes us experience our freedom and, as a result, the freedom of God himself.”

Francis told them, “We can ‘do without’ the Lord’s mercy for a long time.” Indeed, he continued:

We can go through life without thinking about it consciously or explicitly asking for it. Then one day we realize that ‘all is mercy’ and we weep bitterly for not having known it earlier, when we needed it most!

He described that “feeling” as

a kind of moral misery. It is the entirely personal realization that at a certain point in my life I decided to go it alone: I made my choice and I chose badly. Such are the depths we have to reach in order to feel sorrow for our sins and true repentance. Otherwise, we lack the freedom to see that sin affects our entire life. We don’t recognize our misery, and thus we miss out on mercy, which only acts on that condition. People don’t go to a pharmacy and ask for an aspirin out of mercy. Out of mercy we ask for morphine, to administer to a person who is terminally ill and racked with pain.

Then at noon, the tireless pope addressed priests from all over Italy in St. Mary Major’s Basilica and reminded them that “God keeps forgiving, even though he sees how hard it is for his grace to take root in the parched and rocky soil of our hearts. He never stops sowing his mercy and his forgiveness.”

He emphasized the need to ask God for mercy for sins committed and to open one’s hearts to receive that mercy. He recalled great saints who did just that and as a result were able to show mercy to others. He put it this way:

The best practitioners of this mercy that rights wrongs are those who know that they themselves are forgiven and sent to help others. We see this with addiction counsellors: Those who have overcome their own addiction are usually those who can best understand, help and challenge others. So too, the best confessors are usually themselves good penitents. Almost all the great saints were great sinners or, like Saint Therese, knew that it was by sheer grace that they were not.

He urged them to contemplate the lives of the great saints “who let their hearts be recreated by mercy,” starting with St. Peter, who “was healed of the deepest wound of all, that of denying his friend.”

He recalled St. Paul, too, whose “harsh judgment made him a persecutor,” but then “mercy so changed him,” and, changing his whole approach, “he did not judge even himself, but instead let himself be justified by a God who is greater than his conscience, appealing to Jesus as the faithful advocate from whose love nothing and no one could separate him.”

Francis mentioned other saints, too, including Augustine, Francis of Assisi, Ignatius of Loyola and his own compatriot, the Blessed José Gabriel del Rosario Brochero, the Argentine priest known as the “Cura Brochero,” whom he will canonize in September, who “let his heart be shaped by the mercy of God” and “wanted to die on horseback, crossing a mountain stream on the way to anoint a sick person.”

He recalled also the saintly Vietnamese Cardinal Van Thuan who used to say that “in prison, the Lord taught him to distinguish between ‘God’s business,’ to which he was devoted in his free life as priest and bishop, and God himself, to whom he was devoted during his imprisonment.”

Then speaking off the cuff, he told the priests, “If you are not able to listen to the voice of the one who knocks on the door, you are not capable of speaking to them of God.”

He urged them above all to reflect on Mary, the mother of Jesus, who “is the simple yet perfect vessel that both receives and bestows mercy,” and he confided that he had prayed for all of them in front of the icon of Our Lady of Guadalupe in Mexico, “that you may be good priests.”

This afternoon Francis will give his third and last meditation for priests from all over the world at the Basilica of St. Paul’s Outside the Walls.

Note: The texts in English (excluding off the cuff remarks) can be found on the Vatican website.

Gerard O’Connell
@gerryorome
Show Comments (
3
)
Comments are automatically closed two weeks after an article's initial publication. See our comments policy for more.
Bruce Snowden
6 years 6 months ago
Just finished reading Holy Father Francis' "retreat talks" to priests on the mercy of God and can't find an adjective adequate enough to describe them, talks I understand as applicable to the entire Church which through Baptism share the priestly character of Christ all called to the ministry of mercy, everyone. To call Francis' talks "exquisite" sounds weak, but perhaps because his words of mercy fill the Church with the illuminating and exhilarating light and fragrance of Divine exquisiteness, pictured and framed in mercy, that word may be as close as I can get, speaking as it does of the very nature of God. The Holy Father used the Vietnamese Cardinal Van Thuan as an example of someone focused on God's Mercy. Years ago reading about his time in prison I indelibly remember the following. The imprisoned Cardinal, then not yet a Cardinal, celebrated Mass clandestinely, using a sliver of bread along with three drops of wine and one drop of water in his cupped hand, that cupped hand his chalice! Beautiful!
Brian Parker
6 years 6 months ago
Bruce, thanks for your comments. I need to find that first book you mentioned. I appreciate the steer.
Bruce Snowden
6 years 6 months ago
Brian, thanks for your kind comment. If you're talking about the Cardinal Thuan action, I think you'll find it in the book, "Testimony of Hope" by the Cardinal dealing with the spirituality of St. Pope JPII. The priesthood reading was from an article in current AMERICA Magazine online, in Pope Francis' talks to priests and seminarians, by Gerald O'Connor.