Pope to Synod Fathers: Don’t give in to the conspiracy theory 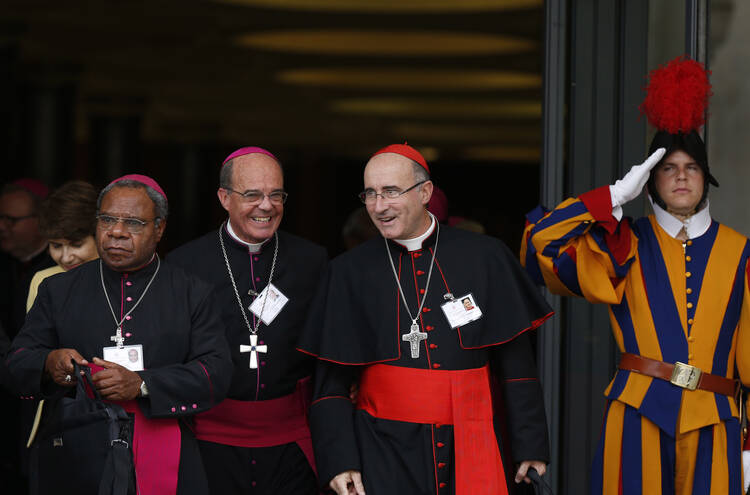 In what is now being seen as a highly significant intervention at the synod on the family on October 6, Pope Francis warned the synod fathers against giving in to "the hermeneutic of conspiracy"—which in English would be called "the conspiracy theory"—which, he said, “is sociologically weak and spiritually unhelpful.” He asked them instead to engage in “a profound discernment to seek to understand what the Lord wants of his Church.”

His important statement was not mentioned at the Vatican press briefing that day, but it was revealed later in a Twitter message by Father Antonio Spadaro, S.J, a synod father appointed by the pope. It has also been confirmed by several other sources, and at the press briefing, Oct 7.

Francis' words take on particular significance in the light of some of the serious challenges that he is facing at this synod, some of which I mentioned in my last report, among them the allegation (expilict or implicit) that the synod under his leadership is somehow putting at risk the church’s traditional teaching on marriage and the family, and the allegation that the synod’s new methodology, which he approved, is more favorable to those who want greater openness in the church’s pastoral approach in this whole area.

The pope’s words take on even greater significance in the light of another challenge that has so far gone unreported and was not even mentioned at the October 6 press briefing. It is one that I have since confirmed from several sources (from different parts of the world) who were present when it was made and who specifically described it as "a challenge."

It came from the Australian cardinal, George Pell, Prefect of the Secretariat for the Economy and a member of the council of (nine) cardinal advisors to the pope. Speaking near the end of the one-hour “free discussion” session on Monday evening, October 5, Pell suggested that the membership of the special commission of ten persons chosen by Pope Francis to write the synod’s final document should be expanded. Drawing attention to the crucial role that this commission will have, he argued that it does not have a sufficiently broad spectrum of members, from the different regions, and proposed that its composition be “expanded” with other members elected by the synod assembly.

Sources say that underlying Pell’s challenge, though not explicitly stated in the synod hall, is the view that a majority of the ten members chosen by the pope are moderate, or are perceived by some as not sufficiently robust in defending the church’s doctrine on marriage and the family. Those who hold this position suggest, imply or allege that as a result of this composition the final document may not hold firm on traditional church teaching. (Interestingly, a somewhat similar position appeared the day before Pell spoke in an article in the American review, First Things, written under the pseudonym Xavier Rynne II.)

Pope Francis was present when Cardinal Pell spoke, but said nothing. Next morning, however, after Cardinal Lorenzo Baldisseri, the secretary general of the synod, explained the new methodology which Francis had approved on Sept. 7, the pope spoke.

He underlined the fact that this synod should be seen as “a continuation” of the 2014 synod, and recalled that in last year’s synod the church’s doctrine on marriage and the family had not been questioned, and remained valid today too. In other words, it is not up for debate. He reminded participants that the question of allowing divorced and remarried Catholics to communion is only one of the many important issues under discussion, and insisted that the synod cannot be reduced to that single issue.

He then went onto emphasize the importance of the work in small groups in the reformed synod process, and said the results of these groups will be given to the ten-person special commission that he has established, who will then draft the synod’s final document and present to the fathers for their final approval. In this way, he let it be known that the composition of that commission remains unchanged.

Then, without referring to any particular one of the above mentioned challenges or similar maneuvers like them, Pope Francis warned the 270 synod fathers, and the 48 other participants, against giving in to “the hermeneutic of conspiracy” which, he said, “is sociologically weak and spiritually unhelpful.” He asked them instead to engage in “a profound discernment to seek to understand how the Lord wants his Church [to be].”

Last September, Pope Francis established the special commission for the drafting of the synod’s final document. He appointed ten members from different geographical regions of the world to this commission, as follows:

1. Cardinal Peter Erdo (Hungary), the general rapporteur of the synod

2. Cardinal Lorenzo Baldisseri (Italy), the secretary general of the synod

3. Archbishop Bruno Forte (Italy), the special secretary to the synod

9. Bishop Marcello Semeraro (Italy and secretary of the council of nine cardinal advisors)

10. Father Adolfo Nicolás Pachon, S.J,  (Spain), superior general of the Society of Jesus (and one of the representatives of the religious orders at the synod)

Article 35 of the synod’s official handbook ("Vademecum") explains that this commission will carry out its work in two stages.  First, “at the end of the examination of the three parts” of the synod’s working document (the "Instrumentum Laboris") the commission  “is to proceed to draw up a draft of the final document (the 'Relatio Finalis'), which is to be proposed to the plenary assembly for modifications.” After that, the special commission “then proceeds to draft the definitive text of the final document which is to be presented in the synod hall for a vote, before it is given to the Holy Father as the fruit of the synod.”

Article 60 deals with voting at the synod, and states: “For the approval of the final document, a strong consensus or at least a two-thirds majority among those voting is required.”

Gerard O’Connell
@gerryorome
Show Comments (
3
)
Comments are automatically closed two weeks after an article's initial publication. See our comments policy for more.
Phil Tanny
7 years ago
Sincerely no offense to the author, but why read the article when the included photo pretty much says it all? Darn, now I won't be able to get a mental image of Jesus in a dashing costume out of my mind.
Luis Gutierrez
6 years 12 months ago
Conspiracies can be good or bad, depending on whether the order of things to be reformed is bad or good. This would be the first meeting of this kind in the history of humanity in which there is no conspiracy. Acts 15 bears witness to a good conspiracy to get rid of a remnant of the Old Law about circumcision. Hope that the Holy Spirit creates another good conspiracy to ordain women to the priesthood, and Pope Francis buys into it.
L J
6 years 12 months ago
Wonderful article as always. Some "c"atholic websites are propagating the lie of "conspiracy" (e.g EWTN's several affiliates, Joseph Fessio's rag and others). It is curious that those who push their fear mongering fail to live be their hero's creed: "Be not afraid", St John Paul II let the dead bury the dead. Fessio and M. Angelica can grab their rosaries, flog each other in the chapels and pray the gay away all they want. For every person they cause to stumble due to their fears, weak, lack of faith, and powerful media machines, they earn millstones around their necks. Canon Law speaks loud and clear about those ordained and religious individuals who cause the Faithful scandal. Would that they follow Canon Law as promulgated by JPII !