Pope: This Synod on the Family must be seen as a continuation of 2014 synod. 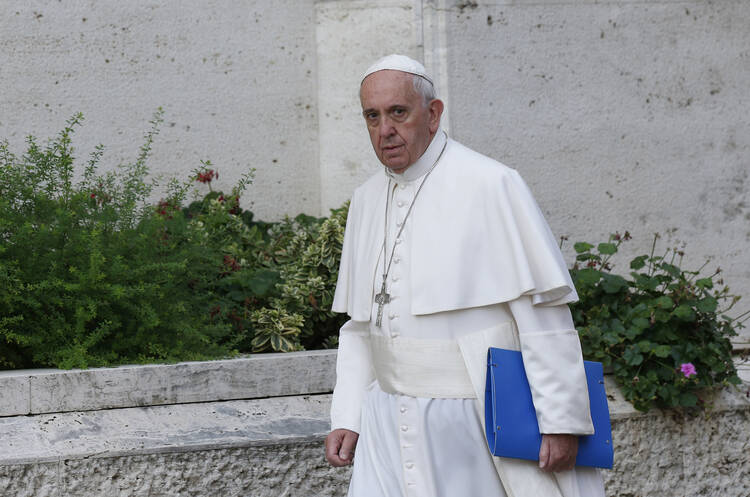 In a significant intervention at the plenary assembly of the synod on the family on the morning of its second working day, Pope Francis sought to put the record right on a number of issues, and clarified what is the status and subject matter of this synod.

He began with a most important one: reassuring the 270 fathers that the Catholic doctrine on marriage had not been put into question at the Extraordinary Synod in 2014 and so retains its full validity. In other words, it is not up for debate.

His statement was read as a clear answer to the those bishops in the synod—a minority of the fathers, and other prelates who are not attending this three-week gathering—who have cast doubts on this matter, and would appear in this way to be seeking to challenge the progress made at that important assembly last year, a progress that is evident in the working document (the "Instrumentum Laboris").

A number of bishops, clergy and lay people have given voice to their doubts over the past twelve months through various petitions, publications and declarations to the media, implying that the church doctrine on marriage is at risk in the synod, but the pope’s statement today effectively dismissed these challenges as groundless, and without foundation.

His words also reassured the many fathers who are attending the synod on the family for the first time, and who risked being misled by such doubt casting.

Pope Francis also commented on the attention that is being given—particularly in the media—to the issue of whether divorced and civilly remarried Catholics may be allowed to receive the Eucharist under certain conditions.  He insisted that the synod cannot be reduced to this single issue; it is only one among a great many important topics being discussed, by the 318 participants at the synod (270 of whom are synod fathers with a right to vote in the final deliberations). He had made a similar comment also on the flight back from Philadelphia to Rome.

As mentioned in my report yesterday, many synod fathers wondered what the basic document for the discussion in the small groups should be given that Cardinal Erdo’s keynote report yesterday had, in many ways, taken a different approach to that of the working document. The latter text was approved by the Council for the Synod and the pope, and published last June.

This morning, Pope Francis stated clearly that the key documents for this synod are the final report of the 2014 synod, and his own two major speeches given at the beginning and the end of that assembly. This means the working document, which is the fruit of that synod and also incoporates the input from various sources over the year since then, stands as a basic text.

The Vatican spokesman, Fr. Federico Lombardi S.J., told the media at a press briefing today that “The Holy Father thought it important to say that what we are doing here must be seen as a continuation of last year.”

The pope also spoke in support of the new reformed methodology of the synod. Whereas the previous system, to a great extent, privileged speaking in the plenary assemblies, and had been heavily criticized for many years, the new system—now being introduced for the first time—by contrast gives considerable space for discussion in 13 small language groups, each with about 20 members. This enables participants to delve more deeply into the subject matter under discussion.

Nevertheless, several synod fathers who had grown accustomed to the previous process voiced complaints against the Secretary General, Cardinal Lorenzo Baldisseri, for the new methodology. Some even suggested that the reform actually favored the more progressive sector at the synod.

As archbishop of Buenos Aires (1998-2013), the future pope had attended several synods and had experienced at first hand the weakness, not to say the failure of that former process and methodology. Like a great many other bishops, he wanted it reformed, and as pope he ensured that this has happened. This morning, he came to the cardinal’s defense by making clear that he had personally approved this reform on September 7, and he also emphasized the great importance of the work that will be done in the small groups.

NOTE: The Vatican has not yet released a text of the pope’s words. This report is based on reports given at the briefing today, and other information available to the author. It may be subject to later revision.

Gerard O’Connell
@gerryorome
Show Comments (
1
)
Comments are automatically closed two weeks after an article's initial publication. See our comments policy for more.
L J
6 years 2 months ago
In the interest of humility, when can the Catholic Church expect Raymond Cardinal Burke to issue an apology for the gross misrepresentation he did of the 2014 synod, the lies he spread about the Pope and Church are introducing "confusion", and the baseless, groundless, prideful acts of attack on the Holy Father? in the interest of humility, of course, we would expect Burke to proclaim as vociferously a mea culpa with or without a red silk train, as he did in casting doubt on the Church Just saying