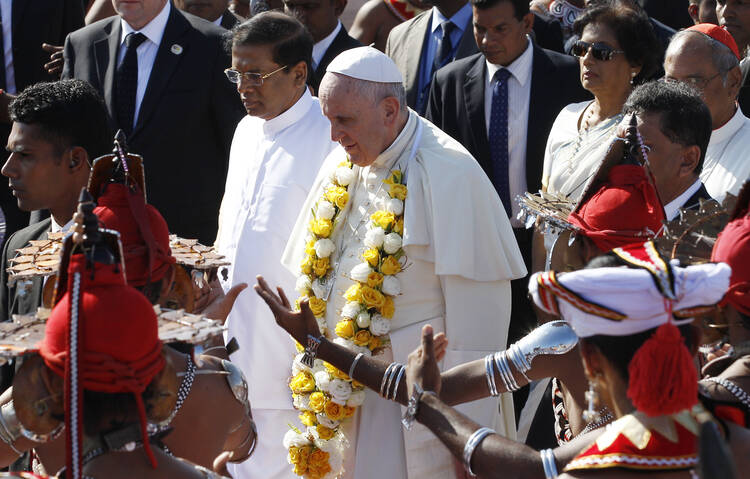 Immediately on arrival in Sri Lanka on January 13, Pope Francis called for a process of reconciliation and healing “and the pursuit of truth, not for the sake of opening old wounds, but rather as a necessary means of promoting justice, healing and unity.”

Known as a pope who does not duck problems but prefers to face them head one, Francis is well aware that the ethnic civil war that raged in this country for 30 years and only concluded, in the most brutal manner, in May 2009, has left deep scars in the soul of the nation and particularly in the Tamil minority who live mainly in the North and East of this beautiful small island, and feel their culture, their identity and their rights are not respected in this, their homeland. Francis, by his words, showed clearly his desire to foster and encourage a process of healing and reconciliation, something that has yet to happen in any substantial way after the war. His hope is that the new Government will go down this road.

The Jesuit pope expressed this wish after being warmly welcomed at the airport by the new President, Maithrapala Sirisena, and the Cardinal Archbishop of Colombo, Malcolm Ranjith, together with other dignitaries, as well

as traditional Singhalese and Tamil dancers and drummers. After receiving flowers from two young children and greeting the dignitaries, Pope Francis stood with the President under a canopy to protect them from the hot sun, as the choirs sang, the bands played the Vatican and Sri Lankan national anthems, and the military gave a 21 gun salute in his honor.

President Sirisena told him he was particularly glad to welcome him since he had just been elected to lead the country and was pleased “to receive your blessing as I commence my term of office.” He recalled the Pope’s contribution to peace and reconciliation among nations and communities worldwide, and said he was sure Francis visit to this island will contribute to “the domestic efforts” in this area which his government seeks to pursue.

When the President finished taking, Pope Francis began to speak slowly but distinctly in English, at a welcome ceremony broadcast live on national television and radio in this island the size of Sicily. He explained that while his visit was “primarily pastoral” – to meet, encourage and pray with the island’s Catholics and canonize Blessed Joseph Vaz, at the same he said he had come “to express the Church’s love and concern for all Sri Lankans, and to confirm the desire of the Catholic community to be an active participant in the life of this society.”

Then, in a key paragraph, he told them that “the inability to reconcile differences and disagreements, whether old or new, has given rise to ethnic and religious tensions, frequently accompanied by outbreaks of violence” in our world. “Sri Lanka for many years knew the horrors of civil strife, and is now seeking to consolidate peace and to heal the scars of those years,” he said. He acknowledged that “it is no easy task to overcome the bitter legacy of injustices, hostility and mistrust left by the conflict. It can only be done by overcoming evil with good, and by cultivating those virtues which foster reconciliation, solidarity and peace.”

He told this nation of 21 million people (74 percent of whom are Singhalese and mainly Buddhist, 19 percent are Tamil and mainly Hindu) that “ the process of healing also needs to include the pursuit of truth, not for the sake of opening old wounds, but rather as a necessary means of promoting justice, healing and unity.”

He said he was convinced that the followers of the various religious traditions “have an essential role to play in the delicate process of reconciliation and rebuilding which is taking place in this country.”

For that process to succeed, he said, “all members of society must work together; all must have a voice. All must be free to express their concerns, their needs, their aspirations and their fears” . Most importantly, he added, “they must be prepared to accept one another, to respect legitimate diversities, and learn to live as one family.” Whenever people “listen to one another humbly and openly, their shared values and aspirations become all the more apparent,” he said, and then “diversity is no longer seen as a threat, but as a source of enrichment.”

While it is important to improve infrastructures and meet material needs, Pope Francis said referring to plans the past Government had in mind, he insisted that it is even more important to promote “human dignity, respect for human rights, and the full inclusion of each member of society.” He expressed his hope that Sri Lanka’s political, religious and cultural leaders, will work to this end and do so “by measuring their every word and action by the good and the healing it will bring” and thus make “a lasting contribution to the material and spiritual progress of the Sri Lankan people.”

He concluded by invoking God’s bless upon Sri Lanka, and prayed that all its people may enjoy prosperity and peace.

After the upbeat welcome ceremony, Pope Francis, looking very happy, drove in an open popemobile, without any protection from the blazing sun, from the airport to the nunciature in this metropolitan city of some 2 million people, past a parade of 40 elephants at the airport colorfully dressed for the occasion, and waving to the tens of thousands of Sri Lankans – Catholics and Buddhists alike, that lined the route to greet him.

The 28 km journey took 1 hour and 40 minutes amid a distinctly festive atmosphere, along streets festooned with Vatican and Sri Lankan flags, and large billboards with photos of the smiling Pope. He stood all the way, waving to the vast crowds that lined the streets all the way to the capital. He blessed many children on the way and at one stage got out of the popemobile to embrace a man in a wheelchair, and was quite tired at the end of the journey, which came on top of the 9 hours and40 minutes overnight flight from Rome to Colombo. All this resulted in his being not only tired by also far behind schedule, and so he decided to cancel at the last minute his planned visit to the archbishop’s residence where he had intended to meet and pray with the country’s bishops. But since he had already met the bishops at the airport, the only ones that were most disappointed by the cancellation were the many ordinary people that had gathered outside the residence to see him, and the seminarians that had congregated inside the grounds of the archbishopric.

His day had begun in the best possible way, and this evening he will have a meeting with the new President and representatives of the country's main religions - Buddhism, Hinduism, Islam and Christianity. But most people are looking forward to tomorrow, Wednesday, January 14, when he will declare Blessed Joseph Vaz, the country's first saint. The Government of this majority Buddhist country has declared the day a national holiday in the Pope’s honor, and hundreds of thousands of Catholics and others are expected to join him for the mass and canonization ceremony.