On plane back to Rome, Francis says, "To identify Islam with violence is not true.” 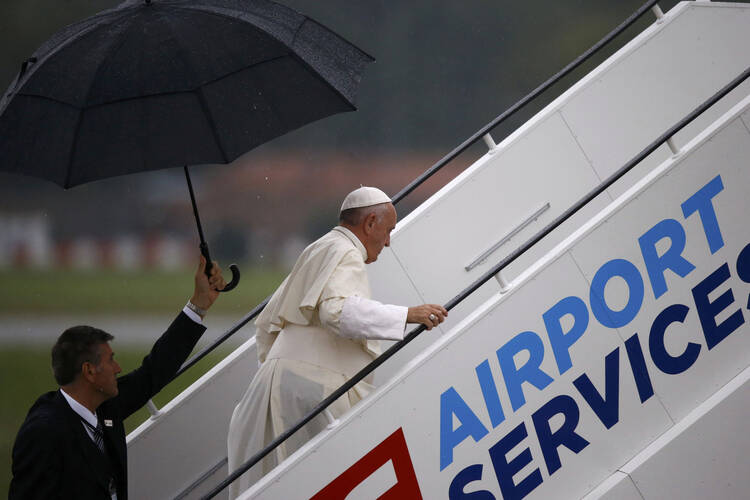 “It’s not true, it’s not right, it’s not just to say that Islam is terrorist,” Pope Francis said on the plane from Krakow to Rome.

Echoing remarks he has made on previous occasions, Francis said, “I think there are fundamentalist groups in every religion. We have them. The fundamentalists kill with the tongue and but also with the knife. To identify Islam with violence is not true and is not just.”

He said he had a long talk with the Grand Imam of Al-Azhar about this matter when he came to the Vatican not long ago, and “I know how they think, they seek peace, they seek encounter.” The Al-Azhar mosque and university is the most authoritative Sunni Muslim institution in the world, and more than 80 percent of all Muslims are Sunni.

Francis also spoke about the situation in the Central Africa Republic, where Christians and Muslims had lived together in peace for a long time before recent deadly conflicts. He visited the capital, Bangui, at the end of last year to open the Jubilee Year; since then there has been less violence.

Indeed, he said, “Today, they tell me that in the Central Africa Republic many, many Muslims come and go through the Holy Door and pray at the shrine of the Madonna. They are Muslims!” The pope also recalled that when he went to the Central African Republic, he visited a mosque and the local imam joined him on the “pope mobile” to greet people.

Francis also discussed violence between some African tribes and said, “terrorism grows when there no other option.” He added, “the first terrorism is when we put the idol of money at the center, not the human person. That is the first basic terrorism. Think about it.”

The pope was also asked about Cardinal George Pell, a top official in the Vatican. According to reports in the Australian media, the cardinal is under investigation by police in the state of Victoria following new allegations against him of sexual abuse.

Pope Francis responded prudently. He said “the first information” that arrived “was confused,” as the allegations go back 40 years and even the police had difficulty understanding what happened. “One should not judge” until justice has run its course, he said, and the accused is given “the benefit of the doubt” until the contrary is proved. “We must leave this in the hands of the justice and avoid chatter,” the pope said, but “once justice has reached a decision, then I will speak.”

A journalist who is an expert on Turkey raised the question of the coup and subsequent repression there, asking whether Francis has remained silent on the matter to protect the Christians in that country.

Francis responded, “When I had to say things that Turkey did not like, I said them with the consequences that you know.” He said he was not totally sure of what has actually happened there, and added that analysts in the Vatican are studying the situation. “It’s clear that we need to protect Catholics from evil, but not at the price of truth,” he told the press. “You are witnesses that when I had to say something about Turkey, I did.”

Asked about whether the Holy See was going to mediate in the economic and political crisis in Venezuela, Francis recalled that two years ago he had a constructive dialogue with President Nicolas Maduro, but a second meeting was cancelled. He said that he has since sent a letter to the president, but did not reveal its contents, only that there have been “contacts” and there is still talk of mediation.

Francis also answered two questions on Poland, expressing praise for that nation’s people and the work done to ensure the success of World Youth Day.

On his trip to Poland, Pope Francis missed a step and fell while celebrating mass at the Marian shrine of the Black Madonna in Częstochowa.A reporter asked him what happened, and he explained, “I was looking at the [image of] the Virgin and I forgot about the step…I Iet myself fall, otherwise there would have been [negative] consequences.” But he got up rapidly, and there has been no sign that he suffered any harm.

July 31 is the feast of St. Ignatius of Loyola and one journalist wished the pope, Father Federico Lombardi and another Jesuit, Father Antonio Spadaro a happy feast day.

It was Father Lombardi’s last trip as director of the Holy See Press Office and spokesman for the pope, a position he’s held since Benedict XVI appointed him in 2006. Tomorrow, the American reporter Greg Burke will take over both roles.

At the beginning of his meeting with the press, Pope Francis thanked Father Lombardi for his service and presented a cake for him and another Vatican employee, who is also retiring after 37 years of service.

Note: the above is a rapid working translation of what the pope said and is subject to modification when the Vatican provides an official transcript (now posted here).