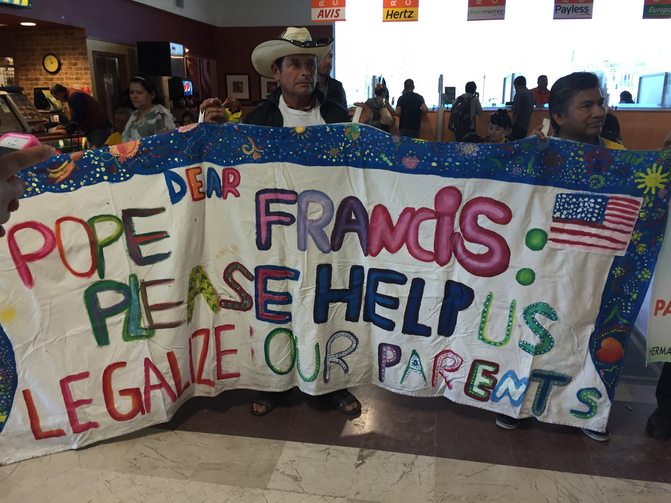 All eyes will be on the border tomorrow as Pope Francis brings his unprecedented visit to Mexico to a close with a Mass in the city’s sports stadium. Behind the altar, the fence that separates the United States and Mexico will be plainly visible. As if that visual weren’t enough, however, before leading the liturgy, Pope Francis plans what will no doubt be a controversial moment of joint prayer and a wreath laying for some 6,000 people who died attempting a desert crossing into the United States. The prayer will unite Catholics separated by the border line running between El Paso and Ciudad Juarez, tracing the course of the Rio Grande. On one side will be Pope Francis, Juarez family members and migration advocates, on the other side  at the U.S. fence-line hundreds of people, including citizens and undocumented residents, will be praying for lost friends and family members.

It’s the photo op of the century and most reporters on hand tomorrow will be jostling for a closeup. The gesture has already drawn the combative attention of GOP presidential hopeful Donald Trump—who called the pope a “political person” on Fox Business news last week who doesn’t understand “the danger of the open border that we have with Mexico.” But here in Juarez, the hopeful of another sort have been pressing into the city all day. They have been imploring Pope Francis to use his influence to encourage U.S. policymakers to consider a more humane approach to the complicated problem of U.S.-Mexico migration, to help bring their families, separated by the border fence and the collapse of U.S. immigration reform efforts, together again. Francis may be preparing to give them what they want. After scolding Mexico’s elite in government and the church, denouncing the exploitation of both the earth and indigenous communities in Chiapas, he may be ready to turn his attention now to U.S. immigration policy.

It is already clear that the pope is no great fan of U.S. border policy and the recent waves of deportation orchestrated by the Obama administration. During his trip to Washington in September he reminded Congress that he was the son of immigrants. During his historic address to Congress he said:

On this continent…thousands of persons are led to travel north in search of a better life for themselves and for their loved ones, in search of greater opportunities. Is this not what we want for our own children? We must not be taken aback by their numbers, but rather view them as persons, seeing their faces and listening to their stories, trying to respond as best we can to their situation. To respond in a way which is always humane, just and fraternal. We need to avoid a common temptation nowadays: to discard whatever proves troublesome. Let us remember the Golden Rule: ‘Do unto others as you would have them do unto you.’

Ciudad Juarez is a bustling, though poor border city, the largest city in the state of Chihuahua and the fifth-largest city in all of the nation. The combined metropolitan area of Ciudad Juárez and El Paso is home to more than 2.6 million people. It has been plagued by violence over the past decade, with the homicide rate peaking above 3,100 in 2010; but drug-cartel or other criminal violence has calmed considerably since then. There were 300 murders recorded in 2015, the lowest reported since 2006. City officials hope that new jobs and new federal and private investment will put those days behind Juarez permanently. In the meantime they plan to use the pope’s visit tomorrow to highlight what they attest are the city’s reviving fortunes.

Billboards welcoming Pope Francis to Juarez sponsored by local businesses and organizations have sprouted all along the city's busy avenues which are crowded with restaurant chains and shops familiar to any American, as well as by mom and pop food stands, taverns and small businesses. The city has official gone dry for the pope's visit. There will not be a drink to be had in restaurant or bar until long after the pope's departure tomorrow evening. While traffic in the city will be largely shut down, thousands are expected to press into Juarez for a chance to attend the stadium celebration or simply to see the pope who has come to Mexico.