Pope in Manila Calls for Elimination of Social Inequalities, Injustices and Corruption 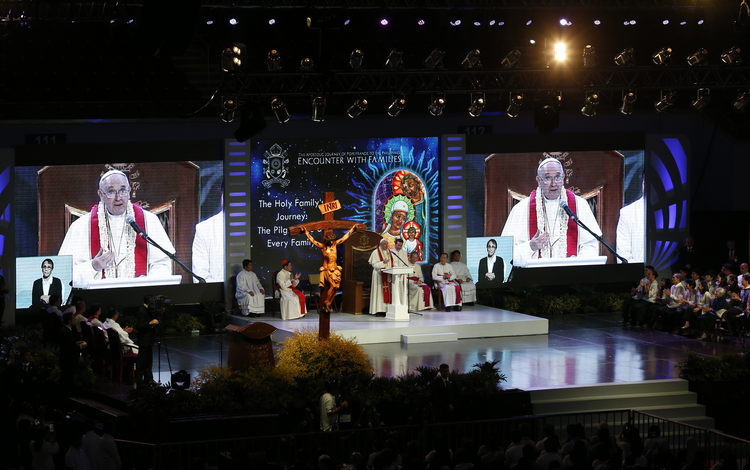 Pope Francis didn’t mince his words when he addressed the state authorities and church leaders of the Philippines. He called on them to combat and eliminate “the scandalous” social inequalities and injustices, as well as the corruption that is widespread in this land, where more than 50 percent of the population are poor.

He articulated his call in two stages on the morning of January 16: first, in a speech at the Presidential Palace to the authorities of this nation of 100 million people, and afterwards, in his homily to the country’s bishops, priests and religious during mass in Manila Cathedral.

At the palace, he told President Aquino, his government and the political and civic leaders present that if they are to face “the demands of the present” and “pass on to the coming generations a society of authentic justice, solidarity and peace,” then they must “ensure social justice and respect for human dignity.” This is a “moral imperative,” he stated.

He reminded them that “the great biblical tradition enjoins on all peoples the duty to hear the voice of the poor. It bids us break the bonds of injustice and oppression which give rise to glaring, and indeed scandalous, social inequalities.”

Well aware that the resistance to social reform by a number of the powerful and very rich families in this land, the Jesuit pope who has seen something similar in Argentina told the state authorities clearly that “reforming the social structures which perpetuate poverty and the exclusion of the poor first requires a conversion of heart and mind.”

He recalled that the Bishops of the Philippines have set this year aside as, “The Year of the Poor.” He told the state authorities listening to him (but his message went to the wider network of authorities), “I hope the prophetic summons of the bishops will challenge everyone, at all levels of society, to reject every form of corruption which diverts resources from the poor, and to make the concerted effort to ensure the inclusion of every man and woman and child in the life of the community.”

Then in a message that goes right to the heart of the Filipino political system, which is marked today by cronyism and corruption, where family dynasties are the law of the day, Francis told them straight: “It is now, more than ever, necessary that political leaders be outstanding for honesty, integrity and commitment to the common good. In this way they will help preserve the rich human and natural resources with which God has blessed this country” and then they will be able to bring together “the moral resources” that are needed to face today’s problems and pass on “a society of authentic justice, solidarity and peace.”

After addressing the state authorities and the diplomatic corps who were also present at the palace, Pope Francis drove to Manila cathedral to celebrate mass for the country’s more than 100 bishops, some 1,000 priests (ten from each diocese) an representatives of the women’s religious congregations. He was amused when he got there to find on the steps of the cathedral two rows of boys dressed as Swiss guards on duty to salute him before he entered.

In his homily, delivered in English like all his talks here, Francis recalled that the Filipino Church is preparing for the fifth centenary of the evangelization of the nation and reminded them that “the Gospel is a summons to conversion, to an examination of our consciences, as individuals and as a people.”

At this moment in history, he said, “the Church in the Philippines is called to acknowledge and combat the causes of deeply rooted inequality and injustice which mar the face of Filipino society, plainly contradicting the teaching of Christ.”

He told the country’s bishops and clergy that “the Gospel calls Christians to live lives of honesty, integrity and concern for the common good." It also “calls Christian communities to create ‘circles of integrity,’ networks of solidarity which can expand to embrace and transform society by their prophetic witness.”

He put them on their guard against “the great danger” of “a certain materialism which can creep into our lives and compromise the witness we offer.” He told them that “only by becoming poor ourselves, by stripping away our complacency, will we be able to identify with the least of our brothers and sisters.” By doing so, he added, “we will see things in a new light and thus respond with honesty and integrity to the challenge of proclaiming the Gospel in a society which has grown comfortable with social exclusion, polarization and scandalous inequality.”

Then, departing from his text, he said: “The poor are at the center of the Gospel, they are at the heart of the Gospel. If we take away the poor from the Gospel then we cannot understand the whole message of Jesus Christ.”

He urged the young priests in particular “to be present to those who, living in the midst of a society burdened by poverty and corruption, are broken in spirit, tempted to give up, to leave school and live on the streets.”

Pope Francis’ concrete concern for the poor reappears again and again, and today was no exception. After Mass he visited a center near the cathedral where he met many street children; he talked with them and embraced them before imparting his blessing. Furthermore, as is well known, he is profoundly concerned about the situation of the more than 4 million people who were made homeless by typhoon Yolanda/Haiyan. His wish to meet and comfort them was one of the main reasons for this visit to the Philippines. He will travel to Tacloban by plane tomorrow, January 17, to meet them. He is greatly concerned too about the plight of Filipino immigrants, and in his meeting with families at the “Mall of Asia Arena” this afternoon he listened, deeply moved, as a mother of a family told what immigration had done to her family.

The pope’s statement that the Philippines is “a society which has grown comfortable with social exclusion, polarization and scandalous inequality” is both hard and accurate. Add to that the corruption, which he pointed to and which, Cardinal Luis Antonio Tagle, the charismatic archbishop of this city, told me “is like a dagger pointed at our hearts.” And then there is poverty and, what Tagle calls, “the teeming masses of poor”

One does not have to walk far in this metropolis of 10 million people to see the poor Filipinos the pope and Tagle are speaking about. The situation of poverty is widespread in the Muslim region of Mindanao (and has been the cause of much conflict), it is also much present in eastern, central and western Visayas, and in the Vicol region. One sees it especially in the rural areas, and in the rice and sugar growing zones. In actual fact the question of social justice is intrinsically linked to the question of peace in the Philippines, and especially in Mindanao. This same poverty has forced 10 million Filipinos (10 percent of the population) to emigrate so as to find work elsewhere. The need for social justice and elimination of the inequalities is an urgent need in this country. Pope Francis' forceful call for this is timely and, given his moral authority, it could be a game changer.