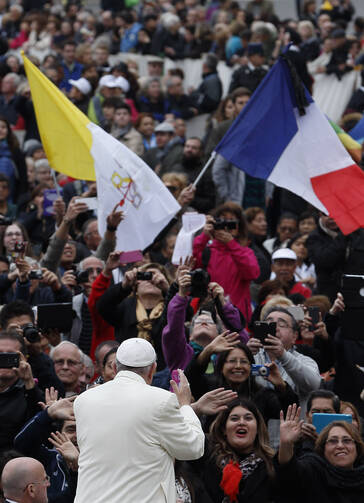 “If a Muslim woman wishes to wear a veil, she must be able to do so; similarly, if a Catholic wishes to wear a cross. People must be free to profess their faith in the heart of their own culture, not at its margins,” Pope Francis stated in a wide-ranging interview with La Croix, the French Catholic daily.

He responded to many questions relating to the separation of church and state, Islamophobia, migration, pedophilia, synodality and reconciliation with the Lefebvrists in an hour-long interview on May 9 with La Croix’s Guillaume Goubert and Sébastian Maillard.

La Croix began by asking why in his speeches on Europe he refers to the continent’s “roots” without every describing them as “Christian.” Francis replied, “We need to speak of roots in the plural because there are so many.”

“When I hear talk of the Christian roots of Europe, I sometimes dread the tone, which can seem triumphalist or even vengeful. It then takes on colonialist overtones.” Europe “has Christian roots, and it is Christianity’s responsibility to water those roots,” he said. “But this must be done in a spirit of service.”

Immigration is at the heart of political controversy in Europe, and La Croix asked whether the continent has the capacity to accept so many migrants. Francis admitted that while “one cannot open the gates wide unreasonably,” one must ask “why there are so many migrants.” He attributed this to “the wars” in the Middle East and Africa, and underdevelopment in Africa. But, he said, “If there are wars, it is because there exist arms manufacturers” and “arms traffickers.” His words carried a punch as France is heavily involved in the arms industry.

He listed “unemployment” as another cause of migration, and said that is due to “a lack of investment.”

A completely free market does not work. Markets in themselves are good but they also require a fulcrum, a third party, or a state to monitor and balance them. In other words, [what is needed is] a social market economy.

He went onto warn against putting immigrants in “ghettos,” as has happened in France, and emphasized the need “to integrate them.”

Asked if the fear of Islam in Europe is justified, Francis said there is not “a fear of Islam as such,” but rather “of ISIS and its war of conquest, which is partly drawn from Islam.” He suggested the West should engage in self-criticism “in the face of Islamic terrorism” and ask “about the way in an overly Western model of democracy has been exported to countries such as Iraq, where a strong government previously existed, or in Libya, where a tribal structure exists.” But in the final analysis, he said, “co-existence between Christians and Muslims is still possible,” as happens in Argentina and Lebanon.

The Muslim presence in France has raised questions concerning the place of religion in the public arena. Asked what the relation between religion and state should be, Francis replied:

States must be secular. Confessional states end badly. That goes against the grain of history. I believe that a version of laicity accompanied by a solid law guaranteeing religious freedom offers a framework for going forward. We are all equal as sons (and daughters) of God and with our personal dignity. However, everyone must have the freedom to externalize his or her own faith. If a Muslim woman wishes to wear a veil, she must be able to do so; similarly, if a Catholic wishes to wear a cross. People must be free to profess their faith at the heart of their own culture not merely at its margins.

Asked by La Croix how Catholics in a secular society “should defend” their concerns on such issues as euthanasia or same-sex marriage, Francis answered:

It is up to parliament to discuss, argue, explain, reason [these issues]. That is how a society grows. However, once a law has been adopted, the state must also respect [people’s] consciences. The right to conscientious objection must be recognized within each legal structure because it is a human right; including for a government official, who is a human person. The state must also take criticism into account. That would be a genuine form of laicity.

Referring to the lack of priestly vocations in France, La Croix asked, “How is it possible to manage today with so few priests?” Francis responded by pointing to Korea which “for 200 years, was evangelized by lay people” and “is a land of saints and martyrs that now has a strong church.” So he concluded:

There is not necessarily a need for priests in order to evangelize. Baptism provides the strength to evangelize. And the Holy Spirit, received at baptism, prompts one to go out, to take the Christian message with courage and patience.

Turning to the historical pedophilia scandals that are shaking France, particularly in Lyon, La Croix asked what should be done. Francis said, “It is not easy to judge the facts decades later in a different context. Reality is not always so clear. Nevertheless, there can be no statute of limitations for the church in this field” and “there must be zero tolerance.”

As for Lyon where the cardinal is under judicial investigation, Francis declared that “based on the information that I have, I believe that Cardinal Barbarian in Lyon took the necessary measures and that he has matters under control. He is courageous, creative, a missionary. We now need to await the outcome of the civil judicial proceedings.” Asked if the cardinal should resign, Francis said, “No. That would be a contradiction, imprudent. We will see after the conclusion of the case. At the moment, however, that would amount to an admission of guilt.”

In the light of his recent meeting with Bishop Bernard Fellay, superior-general of the Priestly Fraternity of St. Pius X, La Croix asked whether “the re-integration of the Lefebvrists into the church [is] again under consideration?”

Francis described Bishop Fellay as “a man with whom one can dialogue” and said he believed the Lefebvrists “are Catholics on the way to full communion.” But before arriving at structural solutions, “it will be necessary to establish a fundamental agreement with them.” Moreover, “The Second Vatican Council has its value. We will advance slowly and patiently.”

Turning to the Synod on the Family, La Croix asked whether that long synod process has changed the church. Francis replied, “I think that we all came out of the various processes different from the way that we entered, including me,” and “I sought to respect the synod to the maximum in the post-synodal exhortation.” But moving beyond that process he said:

Pope Francis said the Second Vatican Council “set out an ideal of synodal and episcopal communion,” and “this still needs to be developed, including at parish level.”

Gerard O’Connell
@gerryorome
Show Comments (
1
)
Comments are automatically closed two weeks after an article's initial publication. See our comments policy for more.
Thomas Farrelly
6 years 3 months ago
It is truly disheartening to hear the Pope nonchalantly dismiss concerns about the lack of vocations to the priesthood. Like his two predecessors, he appears to be doing nothing about a problem that is already a crisis and threatens the continued existence of the Church.