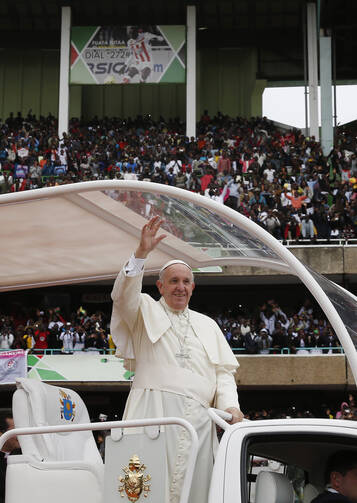 On his last day in Nairobi, Pope Francis first hit out hard against “the dreadful injustice of urban exclusion” when he visited the one of the city’s many slums and, an hour later at a rally with young people, he slammed corruption and tribalism.

He began the day with an early morning visit to the slum district of Kangemi, one of the many slums in this sprawling city of 4.5 million people, and a consequence of the growing gap between the rich and poor in this land which also involves corruption and violence.

He was given a tremendous welcome by thousands of enthusiastic Kangemi’s residents when he arrived at the parish church of St Joseph the Worker, run by the Jesuits.

Francis chose to come here to draw attention to the plight of the millions in Nairobi and other cities in Africa (and indeed in others of the world) who are living in what are called “informal settlements.” According to UN Habitat statistics no less than 55 percent of the city’s population live here on 5 percent of the total land area. One of Kangemi’s residents, Pamella Akwede, told the Pope that people here live on a dollar a day and most of them are casual laborers at companies in nearby industrial areas, who are “not adequately compensated”. She spoke about the major problem of security in the area, the totally inadequate health and sanitation services, and all too often the lack of access to water. She asked the Pope to request the Government to attend to these problems.

Another, more detailed photo of the situation in this slum was given by Sr. Mary Killen from the Sisters of Mercy who is also director of the Mukuru Promotion Centre here. She listed the problems that impacted negatively on the lives of Kangemi’s residents: evictions and threat of evictions, fires, floods, insecurity, addiction to alcohol and drug abuse, dangers to children and youth, services from the state, corruption, grabbing of public land, including school and clinic land. She told the Pope that sixty-five percent of the people of Nairobi live in slums, “but less that 4 percent of church personnel minister there” and, she asked, “Why is this when many congregations were founded to work among the poor.” She thanked him from coming and said, “your meeting with us here has brought dignity to our work, and to those we work with and for.”

From his 15 years as archbishop of Buenos Aires, Francis knows the reality of these ‘informal settlements’ very well; he was a frequent visitor to such places in the Argentine metropolis, and he feels strongly about the increasing number of such realities in many parts of the world as urbanization progresses rapidly.

He addressed this problem head on in a talk that, according to Federico Lombardi, S.J., the Director of the Vatican Press Office, developed in an important way the church’s social teaching on urbanization and “the dreadful injustice of urban exclusion.” In this talk, he built on what he had already said in his speech to the Popular Movements in Santa Cruz, Bolivia, last July, while adding significant new elements. His talk merits considerable attention.

He began with these words: “I feel very much at home sharing these moments with brothers and sisters  who, and I am not ashamed to say this, have a special place in my life and my decisions.” He said he knew their joys and hopes and told them “your troubles and your sorrows, are not indifferent  to me” and significantly added, “How can I not denounce the injustices which  you suffer?”

Before denouncing those injustices however, he highlighted “the culture” of these poor neighborhoods, the wisdom that is to be found there, and the “very positive traits” which can offer something to the world we live in, and are expressed in such values as “solidarity, giving one’s life for others, preferring birth to death, providing Christian burial to one’s dead, finding a place for the sick in one’s home, sharing bread with the hungry.”

He affirmed those values which, he said, “are not quoted in the stock market, are not subject to speculation, and have no market price.” And he reminded them that “the path of Jesus began on the peripheries, its goes from the poor and with the poor, towards others.” But, he said, such noble values cannot hide “the dreadful injustice of urban exclusion” which “are wounds inflicted by minorities who cling to power and wealth, who selfishly squander while a growing majority is forced to flee to abandoned, filthy and  run-down peripheries.”

He went onto denounce “the unjust distribution of land” which leads many families to have to pay “excessive and unfair rents for utterly unfit housing.” He denounced the “faceless property developers” who hoard areas of land and even attempt to appropriate the playgrounds of the children’s schools.

He pointed to another serious problem: the lack of access to infrastructures and basic services, and the lack of water and said, “to deny a family water, under any bureaucratic pretext whatsoever, is a great injustice, especially when one profits from this need.”

He also spoke about “the indifference and hostility” experienced by the slum dwellers, and the spread of violence and criminal organizations in these areas, servicing economic or political interests, that use children and young people as “cannon fodder.” And he expressed his deep appreciation of “those women who fight heroically to protect their sons and daughters.”

He prayed to God that “the authorities” may embark, “together with you,” upon the path of “social inclusion,” for “this is the only guarantee of a peace that is just, authentic and enduring.”

He denounced the above realities as “a consequence of new forms of colonialism which would make African countries parts of a machine, cogs on a gigantic wheel.”

As a response to such unjust realities, Francis proposed giving “renewed attention to the idea of a respectful urban integration” and said, “We need integrated cities which belong to everyone.” He spelled out some of the ways to achieve this including “new urban developments of good quality for housing future generations.” He went on to state clearly, as he had done at Santa Cruz, that “the social and environmental debt owed to the poor of cities can be paid by respecting their sacred right to ‘the three Ls’: land, lodging, labor.”

From Kangemi, he drove to the Karshani stadium for a quite remarkable meeting with 30,000 young people from all parts of Kenya. They gave him a rapturous welcome and greeted him with a mighty roar when he entered the stadium in the popemobile. They sang and danced to the sound of drums, and bowed in waves in the way they used to do to the kings of old, a way known as the ‘igwe’, somewhat like what can be seen in football stadiums today.

Francis had prepared a good talk but after listening to the testimonies of two young people that highlighted the problems they face as a result of tribalism, corruption, youth radicalization and recruitment to hatred, and destructive behavior linked to drugs, alcohol, sex, cults and even suicide, he decided to speak from the heart, without a text, in an inspiring and challenging way.

He denounced the evils of tribalism and told the young people that they should work to overcome it because it leaves to brother killing brother – as the book of Genesis tells us, and it destroys social relations. It is not the way taught by Jesus. “Tribalism can destroy a nation”, he stated. One can only overcome this evil by listening, “by opening one’s heart to the other, b giving one’s hand to the other.”

While he spoke strongly against tribalism in a country that has 42 different ethnic communities, he reserved even more uncompromising words for corruption, well aware that it is widespread in Kenya, and even more so in the country he would next visit—Uganda, and in other African countries too.

He began by posing the question, “How can Christians live with corruption?” and then went on to spell out what corruption is and how it destroys not only the lives of individuals but also the life of the nation.

“Corruption is not only found in politics, it is found in all institutions, and there have been cases of corruption in the Vatican too”, he stated. “It is something that penetrates right inside us. It is like sugar, it is sweet, we like it, and it is easy, but afterwards we feel sick and we end like diabetics, or our country ends with diabetes,” he said.

They cheered when he pleaded with them, “please do not develop a taste for this sugar that is called corruption.” He encouraged the young people to “say no to corruption, and start doing so in your own lives”, and he reminded them that “the corrupt person does not live in peace.”

He concluded by telling the young Kenyans, “Corruption is not a path to life, it is a path to death!”

The pope touched on other topics too including the recruitment of young people by fundamentalist groups where they are inculcated with hatred and taught to kill their brother.

The Vatican will publish the full text of the pope’s remarks in the coming days, but already one thing is certain: he clearly touched the hearts of the young Kenyans with his strong words, which were also a clear message to their elders.

The rally with the young people was the last major public event of the pope in Kenya. Afterwards, Francis spoke with the country’s bishops and then had lunch and a brief rest before setting out for the airport to take the plane from Nairobi to Entebbe airport in Uganda, where he will spend the next two days.