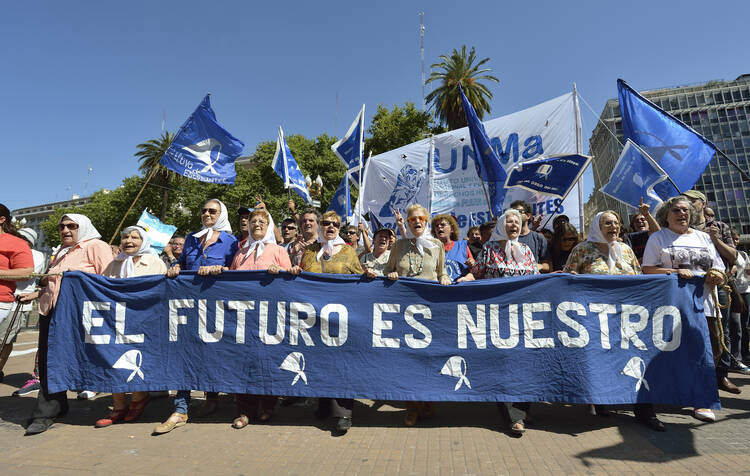 The Vatican will open its archives relating to the period of the military dictatorship in Argentina (1976–83), at the instruction of Pope Francis. This was confirmed today by Federico Lombardi, S.J., the director of the Holy See’s press office, who said it was envisaged that “in the coming months” it will be possible to consult the documents held there.

The confirmation came on the eve of the 40th anniversary of the military coup in Argentina, which took place on March 24, 1976. News that the archives would be opened first surfaced on April 22, 2015, after Pope Francis met Angela Boitano, mother of two “disappeared persons” (desaparecidos) and president of the Association of the Families of the Disappeared. She revealed that during their brief conversation he assured her that the Vatican would open its archives on this period. The Vatican never denied her story; today it officially confirmed it.

Father Lombardi told reporters that “as it has been said some time ago, Pope Francis has manifested the intention to open for consultation the Vatican archives relating to the period of the dictatorship in Argentina (1976-1983).” But for this to happen “the material has to be catalogued,” he said. He revealed that “this work is progressing in a regular way and it is envisaged that it can be completed in the course of the coming months, after which it will be possible to study the times and the conditions for the consultation, in agreement with the Bishops’ Conference of Argentina.” But already “from today,” the Vatican “will seek to respond to specific demands regarding particular questions of a judicial [request] or of a humanitarian character.”

Last week, after meeting Francis in Santa Marta, the secretary general of the Argentine bishops’ conference, Monsignor Carlos Malfa, told the country’s Télam news agency that “the ordering of the archives takes time because it involves reading and classifying the documents. Some are better ordered, but others need more attention.”

While it is understood that the archives contain the reports from the nuncios of that period—Archbishops Pio Laghi (1974-80) and Ubaldo Calabresi (1981-2000), Bishop Malfa told Téelam that “in general” the archives contain “letters that were received and answered regarding knowledge about the fate of disappeared detainees, or some gesture in this direction.” There are also “clippings from the newspapers of that time,” he added. He explained that “the church [in Argentina] and the Vatican are together putting these in order before putting them at the disposition of the interested [parties].” He was unable to give an exact day for when the documents can be consulted because they are working on this right now.

Bishop Malfa recalled that the decision “to order the archives” was taken by the plenary assembly of the Argentine bishops’ conference when, in 2012, it approved the document “Faith in Jesus Christ moves us to truth, justice and peace.” That text, he said, “showed the willingness of the Argentine church to commit itself to the study [being done] of the period and to continue collaborating with the justice [system].” He added that “when justice is delayed for too long, it ceases to be justice, and adds to the pain and skepticism.”

In actual fact, since becoming pope, Francis had already given clearance for two letters from the Vatican archives to be sent to the Argentine tribunal that was judging two former senior military officers for their role in the assassination of the bishop of Rioja, Enrique Angel Angelelli, on Aug. 4, 1976. The letters were written by the bishop and that evidence proved to be an important factor in bringing about their conviction in July 2014.

It’s worth mentioning that today, March 23, shortly before Father Lombardi confirmed the news about the archives, Francis had a highly emotional encounter in St. Peter’s Square, at the end of his weekly public audience. He met with a small group of relatives of Argentina’s desaparecidos, including the elderly mother of Marie-Anne, a young Franco-Argentine model who disappeared in the province of San Juan on Oct. 15, 1976. Afterwards, the sister of the disappeared woman, Marie-Noelle Erize Tisseau, told La Nacion’s correspondent, Elisabetta Piquè (my wife), that her mother was truly overjoyed when Francis told her that he “understood the sorrow of the mothers who had lost their children and of the families who had lost their dear ones.” She was totally overcome with emotion when he then kissed her on the forehead and said, “This kiss is for all the mothers who have suffered the disappearance of their children.”

Francis was provincial of the Jesuits in Argentina at the time of the military coup 40 years ago. His decision to open the archives on that whole period is immensely significant. This was highlighted in a recent article for Vatican Insider, by Luis Badilla, the Latin American director of Il Sismografo (an authoritative website covering Vatican affairs). He classified Francis’ decision as “one of historic importance for the entire Latin American region and, in particular for the peoples of Latin America.” He recalled that “almost all” of them had “suffered the despotic horrors of dictatorship between 1 April 1964 (the military coup in Brazil against Joao Goulart) and 11 March 1990 (the day of the defeat of Augusto Pinochet in Chile).” He noted that these dictatorships were “approved and sustained by the geopolitical and geostrategic logic of the Cold War and of Yalta.”

Mr. Badilla is one of those who believe that Francis’ decision to open the Vatican archives on this period of Argentine history, raises the question as to why the Vatican should not also open its archives on other countries in the region in those decades, including Bolivia, Brazil, Chile, Cuba, El Salvador, Guatemala, Nicaragua, Paraguay and Uruguay. He wonders if this were to happen, whether it could lead to a rewriting of the history of Latin America (and of many Catholics and church leaders there) in those decades, just as has happened in the case of Archbishop Oscar Romero, now beatified.