Pope Francis will canonize Mother Teresa of Calcutta, a symbol of mercy, on Sept. 4 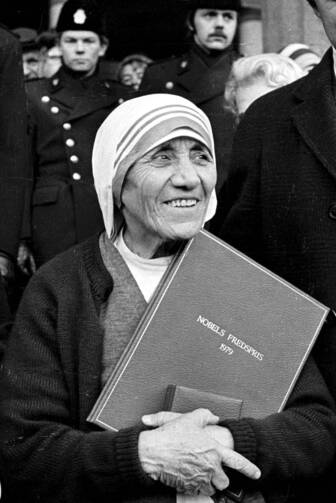 Pope Francis will declare Mother Teresa of Calcutta a saint on Sept. 4 in Rome. He will declare her a saint of the universal church, on the day he has set aside for the celebration of the Jubilee for volunteers and workers of mercy, since she is a symbol of God's mercy for the poor and discarded of this world.

Born Agnes Gonxha Bokaxhiu in 1910 to Albanian parents in Skopje (now part of Macedonia), she joined the Sisters of Loretto at the age of 17 and was later sent to Calcutta. After some years teaching in that city she received a call from God to leave the convent and dedicate her life to the poorest of the poor. From that time onwards this small but determined nun dedicated her life to the poor and discarded in Calcutta and other parts of the world and, in 1950, founded the Sisters of Charity for this same purpose. She became a symbol of mercy and humanity to the whole world, and was awarded the Nobel Prize for Peace in 1979. When she died in 1997 the Indian Government gave her a state funeral. Pope John Paul II beatified her six years later.

Francis, who got to know her reasonably well during a synod of bishops, gave the formal clearance for her canonization and that of four others, including a famous Argentine priest—the “Cura Brochero”—at a public consistory in the Hall of the Consistory in the Vatican on March 15, attended by many cardinals. He also announced the dates for their respective canonizations.

The other four are: the famous Argentinean diocesan priest, Giuseppe Gabriele del Rosario Brochero (1840-1914), known as the “Cura Brochero,” whom Francis greatly admires for his missionary spirit; a 15-year-old Mexican boy, Giuseppe Sanchez del Rio, who died a martyr for the faith in 1928; the Swedish nun, Maria Elisabetta Hasselblad, founder of the Congregation of the Sisters of the Order of the Holy Savior of Saint Brigid (of Sweden); and the Polish priest, Stanislaw of Jesus and Mary, who lived in the 1600s and founded the order of Marian clerics of the Immaculate Conception of the Blessed Virgin Mary.

Francis will canonize the Swedish nun and the Polish priest on June 5. He will declare the Argentine priest and the Mexican teenage martyr saints on Oct. 16. Both ceremonies will take place in the Vatican, probably in St. Peter’s Square.

Mother Teresa was beatified by Pope John Paul II on Oct. 19, 2003, after a first miracle had been attributed to her intercession. Today, Francis formally recognized the second miracle, the cure of a Brazilian man which took place at the end of 2008. He had already approved this second miracle on Dec. 17, after the commission of cardinals and bishops of the Congregation for the Causes of Saints gave their unanimous positive verdict two days earlier confirming the unanimous conclusion reached by the congregation’s own medical board on Sept. 10 that the Brazilian man’s cure could not be explained scientifically.

The miraculous cure took place in the diocese of Santos in Brazil and concerns a local man, then 35, whom doctors concluded was at the death’s door due to “multiple cerebral abscesses with hydrocephalous obstruction.” The man had already “undergone a kidney transplant and was in therapy with immune-suppressors.” The diagnosis left little hope for the man’s life.

The man (whose identity has been withheld) is an engineer. Soon after he got married he began to have health problems and by the end of 2008 he was diagnosed with eight abscesses. His condition seriously worsened with the emergence of hydrocephalous and he fell into a coma on Dec. 9 and was taken for surgery. At the pleading of his young wife, many people started praying to Mother Teresa for him to intercede with God for his cure, and they did so especially on this day.

That day the operation had to be postponed for a short time due to technical reasons, and when the doctor came back to carry out the surgery 30 minutes later, he found the man sitting up and asking what he was doing there in the operating theater. The doctor was stunned, and then examined him only to discover that he was without any sign of his major health problems. At that very hour, the man’s wife and other people were praying together with a priest to Mother Teresa in the hospital chapel. No one had any doubt; the miraculous cure was attributed to Mother Teresa of Calcutta who was born to Albanian parents in Skopje, then part of the Kosovo Vilayet in the Ottoman Empire, in 1910. She died in India in 1997.

Millions throughout the world have long considered the small Albanian nun, who spent much of her life in India among the poor and discarded, a saint, but the official verdict of the church goes beyond that popular recognition and takes it to another level. During her life, dressed in a simple sari, she gave extraordinary witness to the mercy and love of God for the poorest and the most discarded in this world, and it is truly fitting that she be canonized in this Jubilee Year of Mercy by the pope of the poor.