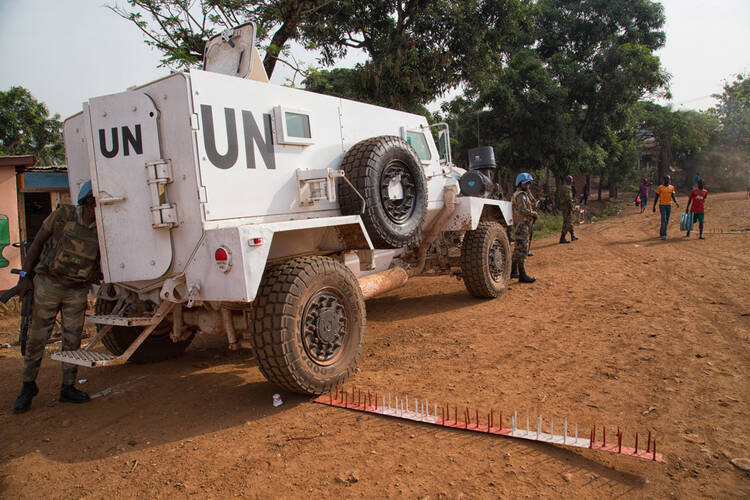 Over two years of persisting disorder, Father Bernard Kinvi has seen people at their worst during civil conflict in the Central African Republic—neighbors turning against neighbors, the strong preying on the weak. He has also embodied what people can be at their best during such tumultuous times. On his way back to the republic on Nov. 23 after being presented with an award from Human Rights Watch on Nov. 18 in New York, Father Kinvi will beat Pope Francis to Central Africa by a few days. The pope is due to arrive on Nov. 29, becoming the first modern pope to visit a war zone in his first visit to Africa.

Father Kinvi describes current conditions in Central Africa, which has struggled for months to contain gang attacks and reprisal violence in its capital city Bangui, as “really precarious.” Outside the capital, the lawlessness can be even worse.

A Camillian priest who runs a hospital mission in the country’s northwest city of Bossemptele, he describes the upcoming visit of the pope as a great blessing for the Central African people.

“There were two priests who died during this conflict and other pastors as well that died … Objectively I know that it could be dangerous,” said Kinvi in an interview with America. “But at the same time I know that the visit of the pope will be of incredible importance for us because he’s not only meeting with Christians he’s also going to the main mosque and he’s going to pray with Muslims there. It’s a great symbol for reconciliation.”

Father Kinvi believes the pope’s visit can “open the doors of mercy” in Central African Republic, to encourage a jubilee of mercy. It’s an opportunity for many also to “ask for forgiveness” for what has happened, he said. Father Kinvi is part of a contingent of religious leaders who visit Muslim refugees in camps in Cameroon to reassure them they are not forgotten and keep lines of communication open in the event that civic reconciliation—and their peaceful return to the republic—become possible.

Otherwise he fears these overcrowded camps could become cauldrons of future resentment and conflict. According to the United Nations, the Central African Republic has an internally displaced population of about 399,000, while almost 460,000 have fled to neighboring countries like Chad and Cameroon.

Rebel Seleka forces, which initially overthrew the established order in Central Republic in 2013 before being routed from power themselves the next year, have asked Muslim militias to allow the pope’s visit to proceed peacefully. They hope too that Pope Francis can help lead the country to a path to reconciliation.

Father Kinvi expects the Seleka will be true to this commitment, but he has seen the rebel forces’ dark side. They were driven out of his community by “anti-balaka” militias which initially organized to halt a Seleka rampage of rape, murder and looting in 2013. It was not long before these new militias began a retaliatory rampage themselves, driving not only the Seleka out but the community’s Muslims, who were suspected of being Seleka supporters.

Father Kinvi earned his award from Human Rights Watch by protecting injured and abandoned Muslims who had been unable to flee, seeking out victims throughout his city and bringing them into his hospital compound. He eventually arranged safe conduct out of Central Africa to Cameroon for the scores of people he had been protecting.

Now he finds his peacemaking mission continues in trying to discourage the worst from the anti-balaka gangs which have taken resident in Bossemptele. Despite the presence of U.N. peacekeepers, these militias strike with impunity, he complains. Now preying on their own communities and anyone unlucky enough to cross their path at the wrong time, “anti-balaka kill people left and right and nothing is done,” he said. “They’ve gotten used to killing. I think they are really bandits and now they have gotten hold of guns, they don’t want to let go of them.”

Finding no support from local or U.N. security forces, he and his fellow priests have personally had to go and negotiate to save the lives of 15 people captive by the militia. He knows of seven whom he was not able to save in time.

Because of the inattention to anti-balaka thuggery and abuses, the U.N. peacekeeping troops are “very discredited,” Father Kinvi said, but maybe “having their presence has kept the worse from happening.”

Father Kinvi says that American can help conditions in Central Africa to improve by remembering its ongoing crisis in their prayers and more practically they can encourage U.S. political leaders to do more to halt the flow of small arms and other weapons into the country. There are “huge issues of impunity where people are walking around after they have killed people. So I’m dreaming of a time when we could have justice that would allow people to know that it you do something like that there will be consequences. That would be a way of diminishing the violence that is taking over the country.”

He also suggests U.S. industry leaders need to be attentive to the provenance of gold, diamonds, gold and other raw materials extracted from Central Africa they may be tempted to buy in grayish markets. Like other African states, the republic’s mineral riches have proved a curse; the illicit market ultimately support militias vying for control of mineral extraction sites, fueling the conflict.