Pope Francis reminds the Synod that he has the last word.

Pope Francis reminds the Synod that he has the last word. 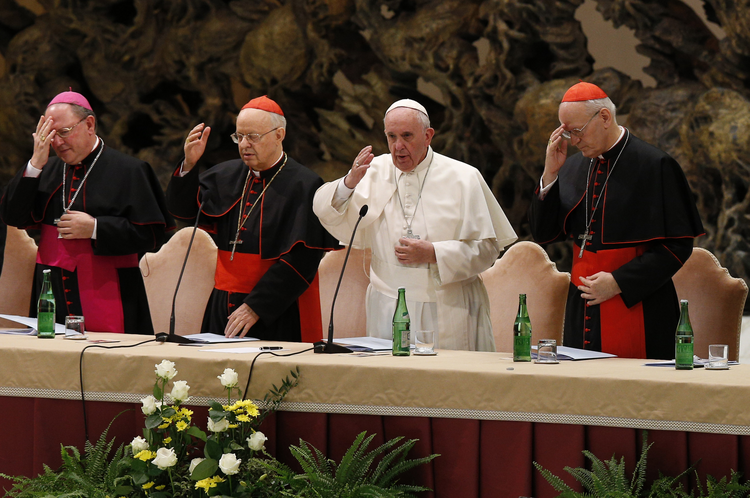 “The synod journey culminates in listening to the Bishop of Rome, (who is) called to speak authoritatively as ‘the Pastor and Teacher of all Christians,'" Pope Francis stated on October 17, on the eve of the final week of the synod on the family.

In a keynote talk of the utmost importance delivered at the celebration for the 50th anniversary of the establishment of the synod of bishops, Francis spoke about “synodality in the church,” the synod’s place within this, the relation between the synod and the Successor of Peter, and reminded the synod fathers that he has the last word.

He emphasized the need to give new life to structures of synodality in the local churches worldwide, and confirmed his intention to promote greater “decentralization” in the Catholic Church and to bring about “a conversion of the papacy.”

Pope Francis began by recalling that ever since he became Bishop of Rome, “I wanted to give value to the Synod, which constitutes one of the most precious inheritances of the last council gathering.”

Paul VI had established the synod he said, so that "it should re-propose the image of the ecumenical council and reflect its spirit and method,” but he foresaw then that with the passage of time “it could be greatly perfected.”  John Paul II too recognized that the synod “could be improved” by giving it fuller collegial responsibility, and Benedict XVI made revisions to it in the light of new Canon Law.

Francis told the synod participants that “we must continue on this road” because today’s world demands “the strengthening of synergies in all areas of her (the Church’s) mission.”

“The way of synodality is the way that God wants for the Church of the third millennium,” Francis declared. He explained that what Jesus is asking of the church today “is all contained in the word ‘synod,’” which means “walking together—laity, pastors, the Bishop of Rome.” This is an easy concept, but it’s on that’s difficult to put it into practice, he admitted.

He recalled that the Second Vatican Council had reaffirmed that “the People of God is constituted by all the baptized” and that “the entire people cannot err in believing.”  Then, in a statement that has far-reaching implications, Francis declared that “the sense of faith impedes the rigid separation between the Teaching Church and the Learning Church, because the flock possesses its own ‘sense’ to discern the new roads that the Lord reveals to the church...” He revealed that it was this conviction that led him to hold the consultations in churches worldwide before the 2014 and 2015 synods, because it’s not possible to speak about the family without talking to families.

“A synodal church is a listening church, (one that is) aware that listening is more than hearing. It’s a mutual listening in which each one has something to learn,” he stated.

He explained that the synod of bishops “is the point of convergence of this dynamic of listening conducted at all levels of the life of the church,” and recalled that on the eve of the 2014 synod he had asked the Holy Spirit to help the synod fathers to listen to God, and with God to listen to the voice of the people so as to understand what God is calling us to do.

Much of the attention at this synod has been focused on the final document, with a minority of fathers expressing anxiety or even worried that the text might be predetermined or even dilute Catholic doctrine. Some have wanted a paragraph by paragraph vote, as if everything depended on the final vote. In his talk today, however, Francis called them to their senses by reminding the 270 fathers that, in actual fact, “the synod journey culminates in listening to the Bishop of Rome, (who is) called to speak authoritatively as ‘Pastor and Teacher of all Christians.'”   In other words, the buck stops with him, not them.

As Bishop of Rome, he said, the pope speaks “not out of his own personal convictions, but as the supreme witness of the faith of the whole church, ‘the guarantor of the obedience and conformity of the church to the will of God, to the Gospel of Christ and to the tradition of the church.”

Then, in words that have particular significance at this moment in church history as the synod moves to an end, Pope Francis emphasized that “the fact that the synod always acts with Peter and under Peter—therefore not only with Peter, but also under Peter—is not a limitation of freedom, but a guarantee of unity.”

As the Second Vatican Council has taught, he said, the pope is, by the will of the Lord, “the perpetual and visible principle and foundation of the unity both of the bishops and of the multitude of the faithful.”

He reminded the fathers that “the bishops are joined to the Bishop of Rome with a bond of episcopal communion (with Peter) and at the same time (are) hierarchically subject to him as Head of the College (under Peter).”

Having spelled out clearly the relation of both the bishops and the synod to the Successor of Peter, he went onto speak at some length about “synodality.” He described it as “a constitutive dimension of the church” that offers “an interpretative frame for better understanding the hierarchical ministry.”

Speaking with passion, he nsisted that “church and synod are synonyms” because the church is nothing other than “the walking together” of God’s flock on the paths of history to that meeting with Christ the Lord.  He recalled that Jesus established the church with the apostolic college at the top, in which (college) the apostle Peter is "the rock," which must confirm the brothers in the faith. He again reminded the bishops that those who exercise authority in the church are called “to serve” the people of God; and said the pope is “the servant of the servants of God.” Today as yesterday, “the only authority is the authority of service.”

Pope Francis told the assembly that “in a synodal church” the synod of bishops “is only the most evident manifestation of a dynamic of communion that inspires all ecclesial decisions.”

He identified three levels of the exercise of synodality in the church. The first is found at the level of the local churches, starting with the diocesan synod and including the other “organisms of communion”—the council of priests, the college of consultors, the chapter of canons and the pastoral council. He asserted that a synodal church can only become a reality if all these organisms remain connected with the grassroots; that is, with the people and their problems. He called for a “re-valuing” of these bodies “as an occasion for listening and sharing.”

Pointing to “the second level” of the exercise of synodality, Francis explained that this exists in the ecclesiastical provinces and regions, as well as in the particular councils, and “in a very special way” in bishops’ conferences.  He underlined the need to reflect on how this synodality can be realized even more, through these “intermediate instances of collegiality.” He recalled that the Second Vatican Council had hoped that these organisms “could contribute to the growth of the spirit of episcopal collegiality,” but that hope “has not yet been full realized.” Indeed,“we’re only half way on the journey.”

Then in a clear reference to the bishops’ conferences, Francis told them that “in a synodal church it is not opportune that the pope replaces the local episcopates in the discernment of all the problems that present themselves in their territories.” For this reason, he said, “I feel the need to proceed in a healthy ‘decentralization.’” He had already stated this in his programmatic document “The Joy of the Gospel” (N.16 and 32), and today he declared categorically that he intends to move ahead with such decentralization.

Francis then came to what he called “the last level” in the exercise of synodality. This exists at the level of the universal church; here, the synod of bishops, representing the Catholic episcopate, becomes the expression of episcopal collegiality within one church that is entirely synodal.

Then, in another significant statement, Pope Francis told the assembly: “I am convinced that, in a synodal church, the exercise of the Petrine ministry can become clearer (receive more light). The pope is not, alone, above the church; but within it as one baptized among the baptized, and within the episcopal college as a bishop among bishops, called at the same time—as successor of the apostle Peter—to guide the church of Rome that presides in love over all the churches.”

That Francis has affirmed all this on the eve of the conclusion of the Synod on the Family is particularly significant not only for the internal life of the Catholic Church, and the follow up to the synod, but also for her relations with the other Christian churches and communities—beginning with the Orthodox Church, and her witness in the world.

When he finished speaking, the audience, that included some 300 cardinals and bishops, gave Pope Francis a standing ovation.