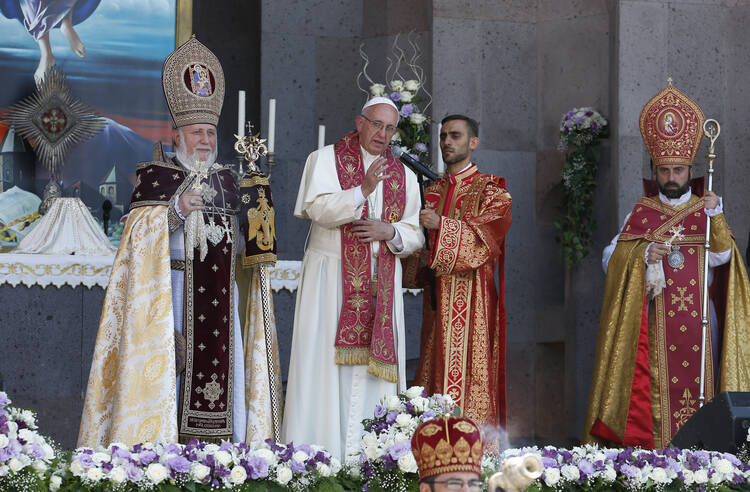 Pope Francis is forging a new road to Christian unity through powerful gestures of humility, while waiting for formal agreements to be reached. He made one such gesture on his last day in Armenia at the end of the Divine Liturgy celebrated by the Supreme Patriarch and Catholicos of All the Armenians, Karekin II, by asking the patriarch for his blessing.

Concluding the homily delivered during the liturgy, Francis turned to Karekin II and said, “Now, Your Holiness, in the name of God, I ask you to bless me, to bless me and the Catholic Church, and to bless this our path towards full unity.”

The patriarch without hesitation got to his feet and embraced and kissed Francis three times, while the bishops, clergy and thousands of faithful present applauded enthusiastically.

It was a truly emotional and striking moment. It was an important milestone on the road to full unity between the Roman Catholic and Armenian Apostolic churches that have been divided for over 1,500 years, following the rejection of the Christological teachings of the Council of Chalcedon by the Armenian synod in 506 C.E. This rejection led to the separation of the Armenian Church from both Rome and Byzantium, but over the past half-century the gap between the Roman and Armenian sister churches has been greatly reduced, though there are still theological differences linked to Chalcedon.

The first Latin American pope made a similar gesture of humility in November 2014 in the church of St George in the Fanar, in Istanbul, when he bowed before the Ecumenical Patriarch of Constantinople, Bartholomew I, and asked for his blessing.

Last evening, in his talk at the ecumenical event for peace in Yerevan’s Republic Square, Francis offered the key to understanding such gestures by drawing on the writings of the Armenian Catholicos, Neres IV the Gracious (1102-1173), who is recognized as a saint by the sister churches. He recalled how the saint “showed an extraordinary love for his people and their traditions, as well as a lively concern for other Churches” and was “tireless in seeking unity.”

He underlined however that “unity does not have to do with strategic advantages sought out of mutual self- interest. Rather, it is what Jesus requires of us and what we ourselves must strive to attain with good will, constant effort and consistent witness.”

He recalled that the saint had affirmed that to reach unity there is need for “everyone’s prayer” and “to grow in mutual love, since charity alone can heal memories and bind up past wounds.”

For the Armenian saint, he said, “the journey towards unity necessarily involves imitating the love of Christ, who, ‘though he was rich’ (2 Cor 8:9), ‘humbled himself’ (Phil 2:8).”  And so, Francis added, “following Christ’s example, we are called to find the courage needed to abandon rigid opinions and personal interests in the name of the love that bends low and bestows itself, in the name of the humble love that is the blessed oil of the Christian life, the precious spiritual balm that heals, strengthens and sanctifies.”

Francis’ gesture of humility today was one of the truly moving moments in the beautiful sung, incensed filled liturgy that was held in the open air, in a square in the Apostolic See of Etchmiadzin, which is a small city with 56,000 inhabitants, 12 miles from Yerevan, that has been the administrative and religious center of Armenian since Christianity was proclaimed the state religion in 301.

Francis was the guest of Karekin during his visit, and the two church leaders processed processed from the patriarch’s residence to the altar, under a canopy, at the beginning of today’s celebration, attended by bishops, clergy and laity from both churches and from ethnic minorities from many countries in Armenia.

During the colorful celebration both leaders delivered forceful homilies. Speaking first, Karekin recalled how faith in God “is being tempted” in today’s world and “is being put to the test by extremism and other kinds of ideologies; xenophobia, addictions, passions and self-centered profits.” Moreover, “the processes of secularism are intensifying, spiritual and ethical values and views are being distorted, and the family structure, established by God, is being shaken”, and “the root of evil in modern life is in trying to build a world without God.”

Referring to Francis’s visit and their conversations together while under the same roof, Karekin told the people, “we reconfirmed that the Holy Church of Christ is one in the spreading of the Gospel of Christ, in taking care of creation, standing against common problems, and in the vital mission of the salvation of man.” And that moreover, the Church’s mission is inseparably linked to “the strengthening of solidarity among nations and peoples, reinforcing of brotherhood and collaboration.”

Thanking the pope for his visit, he said “we and our people will always pray for you dear brother.”

Francis began by thanking the patriarch for having welcomed him into his home in these days during which “we have experienced how good and pleasant it is when brothers live in unity.” He recalled that they had “embraced as brothers,” prayed together and “shared the gifts, hopes and concerns of the Church of Christ” and “we believe and experience that the Church is one.” Then quoting from the Armenian saint Gregory of Narek (whom he has declared a doctor of the church), the pope prayed  “may the cause of our scandal be dissolved by this love,” and that “the communion between us be complete.”

Francis went onto reaffirm, as he had done in his Nov. 2014 meeting with Bartholomew I, that this unity must not be “the submission of one to the other, or assimilation, but rather the acceptance of all the gifts that God has given to each.”

When the liturgy ended, the two Christians leaders went together in procession, under a canopy, back to the apostolic palace, where they had lunch together with the Armenian Apostolic and the Armenian Catholic bishops.

At four o’clock that afternoon, Francis and Karekin signed a joint declaration that included many of the points raised in these days.

Afterwards, they drove 30 miles together to the Monastery of Khor Virap, where St. Gregory the Illuminator was imprisoned for 13 years by the king. The saint was released after the king was cured of a serious illness thanks to his intercession. As a result of this, the king asked to be baptized and then declared Christianity the state religion, making Armenia the first Christian country in the world in 301.

The monastery is very close to the border with Turkey and after praying there, Francis and Karekin released two doves in the direction of that border as a prayer and hope for peace and reconciliation between the two neighbors.

From there, they drove to the airport where Francis took the flight back to Rome.