Pope Francis: “We have to put mercy before judgment.” 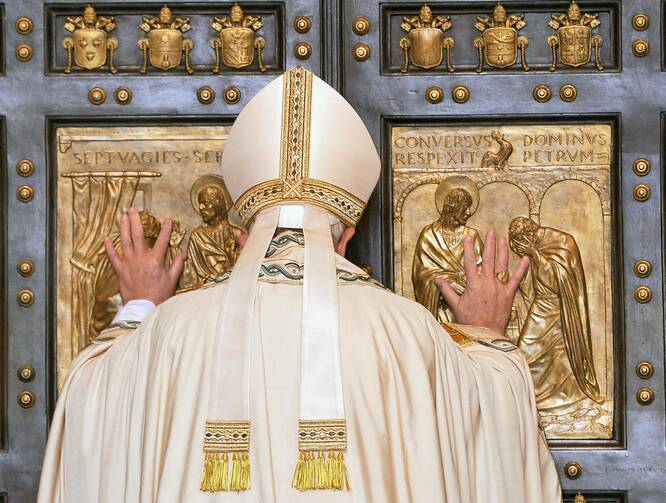 “We have to put mercy before judgment,” Pope Francis said in his homily before opening the Holy Door of Mercy in St. Peter’s Basilica in a simple but deeply moving ceremony on Dec 8. He then walked through this door thereby inaugurating the Jubilee Year of Mercy that will last until Nov. 20 2015.

All those present applauded when he walked through the Holy Door into the basilica. For his part, he stood there framed by the door, head bowed, and prayed for some minutes. Then, Benedict XVI, his predecessor who was present at his invitation, was the next to go through the Door of Mercy. He did so, assisted by his personal secretary, Archbishop Georg Ganswein. Francis embraced him when he came through, as he had done at the beginning of the brief ceremony. Next, all the cardinals, bishops, priests, women and men religious and lay people present passed through the Holy Door, some touched, others kissed it as they went in.

Pope Francis opened the Holy Door at the end of a solemn Mass, at which the Sistine Choir led the singing, and which he celebrated in St. Peter’s Square on a cold, and slightly wet, Tuesday morning—the feast of Our Lady of the Immaculate Conception. More than 50,000 faithful from Italy and many other countries attended the Mass after going through extraordinary security controls such as I have not seen here before. These security measures, conducted with great efficiency, were a direct consequence of the recent terrorist attacks in Paris and subsequent threats to Rome and the pope.

“In a few moments I will have the joy of opening the Holy Door [in the basilica] as I did in Bangui,” Francis said as he began his homily. This was a reference to his historic gesture in the cathedral of Bangui, the capital of the Central African Republic, on Sunday, Nov. 29, when he broke the seven-centuries-old tradition, according to which the Holy Door is first opened in Rome, so as to open the Doors of Mercy for a people crushed by poverty and armed conflict in the heart of Africa.

Speaking from his canopied dais under the central loggia of St. Peter’s, Francis reminded those present, and the many millions worldwide that were following the ceremony by television, that “this Extraordinary Holy Year is itself a gift of grace.”

He explained that “to pass through the Holy Door means to rediscover the infinite mercy of the Father who welcomes everyone and goes out personally to encounter each of them,” and said, “this will be a year in which we grow ever more convinced of God’s mercy.”

Then, in the key passage of his homily, quoting St. Augustine, he declared: “How much wrong we do to God and his grace when we speak of sins being punished by his judgment before we speak of their being forgiven by his mercy.”

“We have to put mercy before judgment, and in any event God’s judgment will always be in the light of his mercy”; he insisted in a strong reminder to pastors and people alike that God is above all else a God of Mercy.

“In passing through the Holy Door then,” he said, “may we feel that we ourselves are part of this mystery of love. Let us set aside all fear and dread, for these do not befit men and women who are loved. Instead, let us experience the joy of encountering that grace which transforms all things.”

Pope Francis deliberately chose to open this Jubilee Year of Mercy on the 50th anniversary of the closing of the Second Vatican Council. He sees this Jubilee as directly linked to that historic assembly of the world’s bishops that was opened by John XXII in 1962 and closed by Paul VI, exactly 50 years ago, on Dec. 8, 1965. He spoke explicitly about this link in his homily.

“Today, as we pass through the Holy Door, we also want to remember another door, which 50 years ago the Fathers of the Second Vatican Council opened to the world,” Francis said.

He told the faithful that “this anniversary cannot be remembered only for the legacy of the council’s documents, which testify to a great advance in faith” because “before all else, the council was an encounter; a genuine encounter between the church and the men and women of our time.”

He described the council as “an encounter marked by the power of the Spirit, who impelled the church to emerge from the shoals which for years had kept her self-enclosed so as to set out once again, with enthusiasm, on her missionary journey.”

The council was, he said, “the resumption of a journey of encountering people where they live: in their cities and homes, in their workplaces.” Indeed, “wherever there are people, the church is called to reach out to them and to bring the joy of the Gospel.”

Pope Francis concluded with these significant words: “After these decades, we again take up this missionary drive with the same power and enthusiasm. The Jubilee challenges us to this openness, and demands that we not neglect the spirit which emerged from Vatican II, the spirit of the Samaritan, as Blessed Paul VI expressed it at the conclusion of the council.”

He prayed that “our passing through the Holy Door today may commit us to making our own the mercy of the Good Samaritan.”

While the Jubilee Year has its roots in the Old Testament, the Catholic Church revived that tradition in the year 1300 when Pope Boniface VIII opened the first Holy Year. Popes have opened 29 Jubilee or Holy Years since then, normally at 25- or 50-year intervals, with the last one in the year 2000 as the world entered the third millennium. In actual fact three popes have each opened two Holy Years: Boniface IX, Pius XI and John Paul II.

In opening this, the 30th Holy Year, Pope Francis has broken with the seven-centuries-old tradition in three ways. To begin with, this is the first Holy Year ever to be centered around a theme; in this case “mercy.” During this year, Francis wants people above all else to understand that God is first and foremost a God of Mercy. Furthermore, he has called on believers worldwide not just to pray and go on pilgrimage but especially to practice the spiritual and corporal works of mercy in this year of grace. He has revealed that he will do just that with specific gestures of mercy on one Friday of each month.

Traditionally the pope has always opened the first Holy Door in St. Peter’s Basilica but, as mentioned earlier, Francis broke with that tradition by opening it for the first time ever outside Rome, in the cathedral of Bangui. This is one of those “peripheries” of the world to which he is giving so much attention in his pontificate. Indeed, speaking on Nov. 29 before opening the Holy Door of Mercy in that Central African cathedral, he hailed the place as “the spiritual capital of the world. Thus, for a moment in history the periphery had become the center of the Catholic world under this first pope from the southern hemisphere.

For the past 700 years, all Holy Years have been Romano-centric. Pilgrims came from all over the world to Rome to go through the Holy Door of St. Peter’s Basilica and, with a contrite heart and prayer, gain the plenary indulgence. In addition, they also went through the Holy Doors in the eternal city’s other major basilicas: St. John Lateran, St. Mary Major and St. Paul’s Outside the Walls. Deeply conscious that countless millions of believers could never make such a pilgrimage, they simply could not afford to do so, Pope Francis has decreed that on next Sunday, Dec. 13, a Holy Door of Mercy is be opened in the cathedral church of every diocese in the Catholic world, and also in the principal shrines in the different countries, so as the open the doors of God’s mercy to them, too. In this way the faithful can obtain the plenary indulgence in all these places worldwide. With this decision Pope Francis has decentralized the Jubilee Year of Mercy, and made it not just a Romano-centric event, but above all else a Holy Year that is celebrated in the local church.

Gerard O’Connell
@gerryorome
Show Comments (
1
)
Comments are automatically closed two weeks after an article's initial publication. See our comments policy for more.
William Rydberg
5 years 10 months ago
Gerard, I am sure that the Pope as well as all of us are grateful that the Year of Mercy and the events are widely written and reported about, both in Catholic and secular sources. This also puts special demands on us Catholics to ensure that the terms we use are precise and convey as much practical accuracy as we can, once the message goes outside the Church, control over the message can be diminished. In any event, its great news and we all ought to rejoice! However, you might want to consult with your Catholic Theological contacts about the title that you seem to have accorded of "God of Mercy" in capitals. If you read the better theological sources in english translation you will find "God of mercy" (note no capitals for mercy) and never "God of Mercy". If you check the Pope's speech in translation the title "God of Mercy" is not used... There are a host of reasons why this is important. Among them, 1 Thess 5:18 "give thanks in all circumstances; for this is the will of God in Christ Jesus for you.", which is a notable primary primary source for the title/descriptor. Which is likely why even Cardinal Kasper said in one of his recent article in English,that is, in First Things he said "...The message of mercy would collapse without the truth that God is love (1 John 4:8,16), without the Incarnation, the Cross and the Resurrection of our Lord and many other.". This may sound like an abstruse theological point, but I assure you that it is not. I like how Bishop Robert Barron summarizes: "...let us remember that mercy is what love looks like when it's turned toward the sinner." Here is an excellent short article by the Bishop published recently in Catholic News Agency http://www.catholicnewsagency.com/column/pope-francis-and-true-mercy-3356/ Let's all rejoice in this Year of Mercy! in Christ,