Today Pope Francis met with the mother of the only Argentinian on death row in the United States. 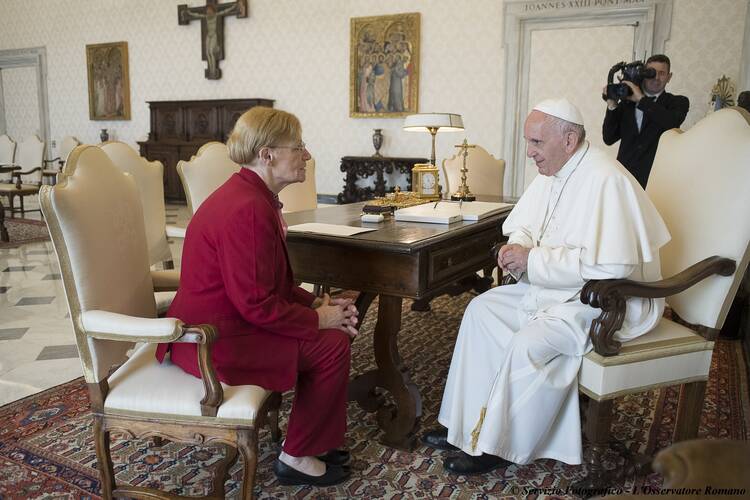 As a further sign of his total opposition to the death penalty, Pope Francis today received in private audience Ms. Lidia Guerrero, the mother of Victor Saldano, the only Argentinian on death row in the United States.

Mr. Soldano, 43, has been on death row in Texas since 1996 when he was first convicted for murder. His mother said he is now so mentally disturbed as a result of this long confinement that he has asked three times to be executed, but she is working hard to save him from this ultimate punishment.

Francis received this courageous mother of four in his private library in the apostolic palace where he received President Barack Obama just over two years ago, and where he regularly receives heads of state and other dignitaries.

Afterwards, she told press that during their private conversation he told her that he is praying for her son and knows the case well and, she added, “I am confident that he will do everything possible to help.” Francis asked her to pray for him, too, she said.

“He received me with much love, and commented on the case, which he knows well,” she said, almost in tears. But she did not wish to go into any more detail about their conversation. Pope Francis “is fighting against the death penalty,” she said, and her son’s case is emblematic of the injustice involved in it and the struggle he is engaged in.

As is well known, the Argentine pope has gone beyond the position taken by his predecessors and that of the Catechism of the Catholic Church on the death penalty (No. 2267) by repeatedly calling for its total abolition worldwide. He did so in his address to the U.S. Congress and in his speech to the United Nations in New York last September and, more recently, in his talk to the summit of judges in the Vatican. Sources later said that he assured Ms. Guerrero that he intends to amend the catechism to reflect this position.

It was their second meeting. She had met him briefly in February 2014, at the end of a public audience in St. Peter’s Square, and he was very affectionate then, too, and told her, "I've prayed so much for that young man from Cordoba,” a reference to the city where he was born in Argentina.

After the press conference, she told me that she is an evangelical, reads the Bible every day and that her faith and her love for her son gave her the strength to continue her long struggle to save his life. This brave and determined woman, now a grandmother, also revealed that she felt “greatly comforted and encouraged” by her conversation with Francis. She handed him a written text, too, in which she said she is carrying on her struggle “not only for justice for my son but also to help prevent others who are poor (and cannot afford a lawyer), of different races and with mental weakness” from suffering similar injustices in the future.

Ms. Guerrero was accompanied to the audience by her son’s two Argentinean lawyers, Juan Carlos Vega and Juan Pablo Cafiero, who was the country’s ambassador to the Holy See when Francis was elected pope. Francis greeted the two lawyers after the private audience with Ms. Guerrero, and the ex-ambassador said, “We saw the pope is very well, and deeply involved with Lidia’s cause.”

Victor Hugo Saldano was convicted for the abduction and murder of Paul Ray King on Nov. 25, 1995, on the outskirts of the city of Plano (in the north of Dallas). He was convicted together with a Mexican accomplice who, however, was sentenced to life imprisonment.

Juan Carlos Vega, the lawyer who has followed the case in these years, told the press that there are many injustices and irregularities in this particular case. He recalled that after the original conviction in 1995, a first appeal was made to the Inter-American Commission of Human Rights, which recognized that racial discrimination had been a key factor in his conviction. In 2002, however, the Supreme Court of the United States agreed with this conclusion, nullified the original conviction and ordered a new trial.

That new trial was held in McKinney, Tex., in 2005, he said, and even though after nine years on death row Mr. Saldano‘s mental faculties were gravely impeded the court refused to allow a psychiatric examination of the prisoner and convicted him for the second time in 2005.

Mr. Vega said that in 2014 they appealed again to the I.A.H.C.R., arguing that his confinement on death row is equivalent to torture and cruel and degrading treatment. They are demanding reparation for the Argentinean, starting with his removal from death row.

The lawyer said they have also filed a habeas corpus petition with a federal district court in Texas, and Mr. Saldano’s case is now in the hands of a federal judge and has been so for the last nine years. If the judge were to confirm the sentence, then Mr. Saldano, though in a seriously disturbed mental state, would be executed by lethal injection. The judge, however, has not acted.

“We want the State of Texas to take him out of death row and transfer him to a psychiatric hospital where he can receive care for his condition,” Mr. Vega said. “And, of course, we would welcome a pardon,” he added.

The Vatican listed Ms. Guerrero’s private audience on the official list of people the pope met this morning, a sign that it wished to give visibility to the case.

Gerard O’Connell
@gerryorome
Show Comments (
2
)
Comments are automatically closed two weeks after an article's initial publication. See our comments policy for more.
Thomas Couture
6 years ago
What about the victim: Paul Ray King?
J Cabaniss
6 years ago
Surely I cannot be the only one concerned about the assertion that the pope "intends to amend the catechism to reflect this position." Whatever position one has on the use of capital punishment we should recognize that church doctrine is not something that can be invented by a pope. As George Weigel has pointed out: The pope is the guardian of an authoritative tradition, of which he is the servant, not the master, or in the words of the Vatican council's Theological Commission: “the Roman Pontiff is . . . bound to revelation itself...”Altering the catechism in a manner that would entail a reversal of doctrine is simply not in his power to do.