Pope Francis: ‘The Gospel of the Marginalized Is Where Our Credibility Is Found and Revealed’ 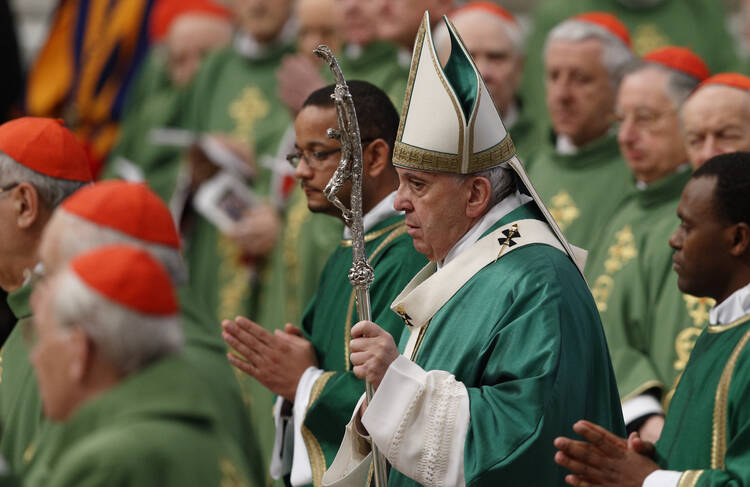 “The Gospel of the marginalized is where our credibility is found and revealed’, Pope Francis told the new cardinals as he spelled out clearly the direction he wants the leadership of the Catholic Church to take in the world today.

He did so in an inspiring and highly significant homily during mass in St. Peter’s Basilica on Sunday morning, February 15, when he spoke about “the compassion of Jesus in the face of marginalization and his desire to reinstate (the marginalized)”, and went onto explain what it means for Church leaders, and in the first place the new cardinals, to follow this example of Jesus in the world today.

He began, as he always does in his homilies, by commenting on the Gospel of the day, which on this Sunday told how Jesus felt compassion for a leper who begged to be cured, and he healed him.  Drawing attention to “the compassion of Jesus”, Francis commented: “He has a heart unashamed to have ‘compassion’“.   Indeed, “compassion leads Jesus to concrete action: he reinstates the marginalized!”

Francis went onto speak about ‘marginalization’ and explained what this entailed for lepers under the legislation of Moses: they were excluded and abandoned by their families, shunned by other persons, cast out of society, they felt ashamed and suffered “physically, socially, psychologically and spiritually”.   He explained that the purpose of this marginalization was “to safeguard the healthy”, “to protect the righteous”, and to “eliminate” or marginalize “the peril” by treating the diseased person harshly.

The Pope then recalled that “Jesus revolutionizes and upsets that fearful, narrow and prejudiced mentality”. He does not abolish the Law of Moses, but brings it to fulfilment “by stating, for example, that the law of retaliation is counterproductive” and “by refusing to condemn the sinful woman, but saves her from the blind zeal of those prepared to stone her ruthlessly in the belief that they are applying the Law of Moses”.

“Jesus also revolutionizes consciences in the Sermon on the Mount”, Francis recalled.  He does so by “opening new horizons for humanity and revealing God’s ‘logic’” which is “the logic of love” and “is based not on fear but on freedom and charity, on healthy zeal and the saving will of God” who “desires everyone to be saved” and wants “mercy not sacrifice”.”

He recalled that Jesus, the new Moses, wanted to heal the leper and, not allowing himself to be “‘hemmed in’ by prejudice, conformity to the prevailing mindset or worry about becoming infected”, he “responds immediately to the leper’s plea, without waiting to study the situation and all its possible consequences!”

The Jesuit pope highlighted the fact that “for Jesus, what matters above all is reaching out to save those far off, healing the wounds of the sick, restoring everyone to God’s family! And this is scandalous to some people!”  In fact, “Jesus is not afraid of this kind of scandal!  He does not think of the closed-minded who are scandalized even by a work of healing, scandalized before any kind of openness, by any action outside of their mental and spiritual boxes, by any caress or sign of tenderness which does not fit into their usual thinking and their ritual purity. He wanted to reinstate the outcast, to save those outside the camp “.

In the second part of his homily, Pope Francis sought to apply that example of Jesus’ compassion to the Church today.  Drawing on what he has learned in almost two years as the Successor of Peter, he told the new cardinals: “There are two ways of thinking and of having faith: we can fear to lose the saved and we can want to save the lost.”

Looking at the cardinals, he told them that “even today it can happen that we stand at the crossroads of these two ways of thinking. The thinking of the doctors of the law, which would remove the danger by casting out the diseased person, and the thinking of God, who in his mercy embraces and accepts by reinstating him and turning evil into good, condemnation into salvation and exclusion into proclamation.”

In actual fact, he said, “These two ways of thinking are present throughout the Church’s history: casting off and reinstating“.   He recalled how both Saints Peter and Paul caused scandal and encountered resistance when they followed Jesus’s example. When Saint Paul followed Jesus’ command to preach the Gospel to the ends of the earth he “caused scandal and met powerful resistance and great hostility” from those who demanded unconditional obedience to the Mosaic Law even from the pagans who converted.  Likewise, Saint Peter was bitterly criticized too by the (Christian) community when he entered the house of the pagan centurion Cornelius.

The first Latin American pope, who like Peter and Paul has also come under criticism from a small but influential minority of Church leaders and intellectuals for his compassion and openness, reminded the 160 members of the College of Cardinals that were concelebrating mass with him, that “from the time of the Council of Jerusalem, the Church’s way has always been the way of Jesus, the way of mercy and reinstatement.”

Perhaps anticipating objections, he assured them that “this does not mean underestimating the dangers of letting wolves into the fold”, rather it means “welcoming the repentant prodigal son; healing the wounds of sin with courage and determination; rolling up our sleeves and not standing by and watching passively the suffering of the world.”

“The way of the Church is not to condemn anyone for eternity”, Pope Francis stated firmly. On the contrary, her way is “to pour out the balm of God’s mercy on all those who ask for it with a sincere heart.”

“The way of the Church is precisely to leave her fenced enclosure behind and to go out in search of those who are distant, those on the "outskirts" of life”, Francis said in words that echoed his famous speech to the cardinals in the pre-conclave meetings.

“The way of the Church is to adopt fully God’s own approach, to follow the Master who said: "Those who are well have no need of the physician, but those who are sick; I have come to call, not the righteous but sinners to repentance", the Pope stated.

“In healing the leper, Jesus does not harm the healthy”, Francis stated. “Rather, he frees them from fear. He does not endanger them, but gives them a brother. He does not devalue the law but instead values those for whom God gave the law.”

Well aware of the existence of “the elder brother syndrome” in the Church in some countries today, Pope Francis told the new cardinals that “Jesus frees the healthy from the temptation of the "older brother" (Lk 15:11-32), the burden of envy and the grumbling of the laborers who bore "the burden of the day and the heat" ( Mt 20:1-16).”

As the cardinals listed with attention to his every word, wondering what might come next, Francis declared: “Charity cannot be neutral, indifferent, lukewarm or impartial! Charity is infectious, it excites, it risks and it engages! For true charity is always unconditional and gratuitous”.

Moreover, he said, “Charity is creative in finding the right words to speak to all those considered incurable and hence untouchable”. And “contact is the true language of communication. It is the same endearing language which brought healing to the leper”.  Speaking from his own pastoral experience, he assured them that “if only we learn this language” then “we can perform many healings”, and those healed – like the leper in the Gospel – will also “spread the word."

He told the new cardinals that “this is the ‘logic’, the mind of Jesus, and this is the way of the Church.”  It means “not only to welcome and reinstate with evangelical courage all those who knock at our door, but to go out and to seek, fearlessly and without prejudice, those who are distant, freely sharing what we ourselves freely received.” He put it another way, saying:  “Total openness to serving others is our hallmark; it alone is our title of honor!

He prayed that Mary, the mother of Jesus, “who herself experienced marginalization as a result of slander and exile” would teach the new cardinals to be “God’s faithful servants” and “to be unafraid of tenderly welcoming the outcast; to be unafraid of tenderness and compassion”, and  “to help us to walk in his footsteps.”

Francis exhorted them “to serve the Church in such a way that Christians - edified by our witness - will not be tempted to turn to Jesus without turning to the outcast, to become a closed caste with nothing authentically ecclesial about it.”

Pope Francis concluded his challenging homily by telling the cardinals, and the whole Church, that “We will not find the Lord unless we truly accept the marginalized!”   He prayed they would remember the example of Saint Francis of Assisi,” who was unafraid to embrace the leper and to accept every kind of outcast.”  He ended with these striking words: “Truly the Gospel of the marginalized is where our credibility is found and revealed!”