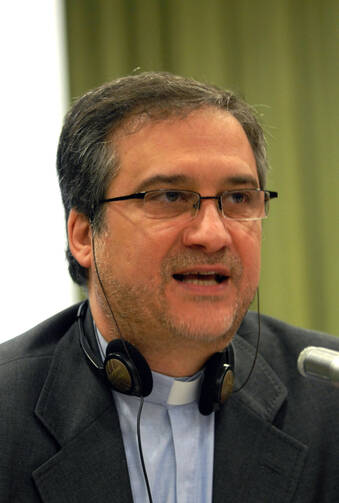 Pope Francis has created a new Secretariat for Communications in the Roman Curia into which all existing Vatican communications offices and operations will be incorporated. At the same time, he has appointed the Italian Monsignor Dario Edoardo Vigano, Director of the Vatican Television Center, as its first prefect.

He created the new Secretariat as a department (dicastery) of the Roman Curia through a decree known as a “Motu Proprio,” dated June 27. The Vatican published it on the same day, and announced that the Secretariat will come into existence on June 29, and will have its offices at Palazzo Pio, Piazza Pia 3.

The papal decree establishes that all existing Vatican’s communications offices and operations will be incorporated under the direction of the new Secretariat. They include the Pontifical Council for Social Communications, the Holy See Press Office, the Vatican Internet Service, Vatican Radio, the Vatican Television Center (CTV), the Osservatore Romano—the Vatican daily and weekly papers, the Vatican Typography, the Photograph Service, and the Vatican Publishing House (Libreria Editrice Vaticana).

It says the new Secretariat  will work hand in hand with the Vatican’s Secretariat of State for the direction of the institutional website of the Holy See—www.vatican.va and the Twitter account of the Holy Father: @pontifex.

In addition to Mgr. Vigano—who gained world fame for his filming of the departure from the Vatican of Benedict XVI on February 28, 2013—Pope Francis has appointed the Argentinian Monsignor, Lucio Adrian Ruiz, as Secretary of the new Secretariat.  He is currently head of the Vatican Internet Service. The pope also named two Italians as Director and Vice-Director General respectively: Dr. Paolo Nusiner, Director General of Avvenire (the Italian Catholic daily), Nuova Editoriale Italiana, and  Dr. Giacomo Ghisani, Head of International Relations Office and Legal Affairs of the Vatican Radio and member of the Administrative Council of the Vatican Television Center (CTV).

In the decree, Pope Francis explained his decision saying that “today’s communications context, marked by the presence and development of digital media, as well as by factors of convergence and interactivity, require a re-thinking of the Holy See’s information system and its reorganization, while giving value to the developments that have taken place over history within its communications system.” He said this rethinking has led to the decision to “proceed decisively to the integration” of these various operations “under a unified management.”

“For this reason—he stated—I have decided that all the realities that, in different ways have been occupied with communications, should be incorporated into one new Dicastery of the Roman Curia that will be called the Secretariat for Communications.” In this way, Francis said, “the communications system of the Holy See will (be able to) better respond to the needs of the mission of the Church.”

Pope Francis revealed that he took his decision after examining the various reports and studies, as well as the recent feasibility study, and having received “the unanimous opinions” of the Council of Cardinal Advisors.

He explained that all current communications operations will continue with their present tasks but, in doing so, they are to follow the directions given by the new Secretariat.

The decree does not indicate the time-frame for the realization of this project. Some sources think it could take from three to five years before the work of incorporation if properly completed.