Pope Francis launches a new Vatican department, including an office for refugees reporting directly to him 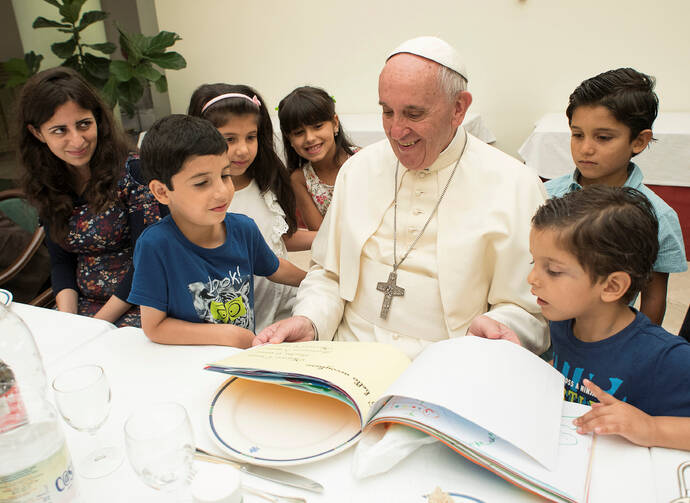 Advancing with determination in the reform of the Roman Curia, Pope Francis has created an important new department for “integral human development” and, as expected, has appointed the Ghanaian cardinal, Peter Turkson, as its first prefect.

The Vatican announced the establishment of this new department (“dicastery” is its official title) on Aug. 31. At the same time, it published the “Motu Proprio” or decree, written by the pope creating it, and also the statute for this body.

Article 1 of the statute states that the new dicastery will have responsibility in the Holy See “for that which relates to justice and peace, including questions related to migration, health, works of charity and the care of creation.”

The dicastery includes an office “for refugees and migrants,” which Francis has decided will, “for now,” respond directly to him. He wants to emphasize the importance of this new department and to guarantee that the church responds adequately to the phenomenon of migration, the greatest humanitarian crisis since World War II. In section 1 of article 4 of the statute, it states, “this section is placed for the time being under the guidance of the Supreme Pontiff who will exercise it in the ways that he deems opportune.”

In his “Motu Proprio,” Francis states that “in all her being and actions, the Church is called to promote the integral development of the human person in the light of the Gospel. This development takes place by attending to the inestimable goods of justice, peace, and the care of creation.”

The term “integral human development” is highly significant and wide ranging. It first appeared in Pope Paul VI’s ground-breaking encyclical “Populorum Progressio” (“On the Progress of Peoples”), published in 1967. It is a concept that goes beyond the secular understanding of development as purely economic and technological, and emphasizes the need to put the human person at the center of all development. It involves the triple duty of human solidarity, social justice and universal charity. It also involves promoting the goal of reconciling humanity with God and people with each other in a way that respects and protects the integrity of all creation.

Francis, in the “Motu Proprio,” explains that this new dicastery “will be competent particularly in issues regarding migrants, those in need, the sick, the excluded and marginalized, the imprisoned and the unemployed, as well as victims of armed conflict, natural disasters, and all forms of slavery and torture.”

According to the statute, the new dicastery will be headed by a prefect, who will be assisted by a secretary and at least one under-secretary “that can also be lay faithful.” Laity, from different parts of the world, will also be on the board of this new department, which will have commissions for ecology, charity and health workers.

Pope Francis has appointed the internationally well-known and joy-filled Ghanaian cardinal, Peter Turkson, as its first prefect. In Oct. 2009, Pope Emeritus Benedict XVI called him to Rome to head the Pontifical Council for Justice and Peace. Cardinal Turkson, who is a biblical scholar, shares and firmly supports Francis’ vision for the church. (His office played a key role in helping draft “Laudato Si’” and, subsequently, in promoting it.)

The new department is the result of a creative merger involving four existing pontifical councils of the Roman Curia, namely: Justice and Peace, the Pastoral Care of Migrants and Itinerants, Cor Unum—the papal charity that provides humanitarian assistance and encourages coordination and cooperation of Catholic charitable works including Caritas Internationalis—and the Pastoral Care of Health Workers. The first three were established by Pope Paul VI as a follow-up to the Second Vatican Council, the fourth was created by St. John Paul II in 1985. All four will be suppressed on Jan. 1, 2017, when the new dicastery comes into existence.

Pope Francis decided to create this new department after extended discussions with his council of nine cardinal advisors (C9), and after an overall consultation with the College of Cardinals in February of 2015.

Gerard O’Connell
@gerryorome
Show Comments (
4
)
Comments are automatically closed two weeks after an article's initial publication. See our comments policy for more.
William Rydberg
5 years 11 months ago
I know Cardinal Turkson who came at the invitation of Cardinal Collins to give a talk here in Toronto. As for the 3 other Dicastries being suppressed, never heard of them.... Glad to see that the Pope is taking a personal interest in a Vatican Dicastry as he has not minced words about the Admin side of the Vatican to my knowledge. As I understand it, Administration is one of the charisms of the Holy Spirit. in Christ,
Reyanna Rice
5 years 11 months ago
"As for the 3 other Dicastries being suppressed, never heard of them..." You would not have heard of the "other 3 Dicasteries" because they were NOT Dicasteries but Pontifical Councils. There is a major difference in the scope and emphasis between a dicastery and a council in Vatican curial structure.
Luis Gutierrez
5 years 11 months ago
This is a laudable initiative by Pope Francis, but it is hard to understand how, in a post-patriarchal world, integral human development can be fostered by excluding 50% of the Catholic faithful from one of the sacraments, to the detriment of the entire body of Christ. It behooves all human institutions, secular and religious, to let go of ancient misconceptions (such as patriarchal gender theory) that no longer serve the human person, body and soul. An integral sacramental economy would be more conducive to integral human development and an integral ecology, for the glory of God and the good of humanity.
Charles Graham
5 years 11 months ago
This is just the start of changing - the Catholic Church has a very long road ahead of them for them to make their word 'bond'. For the Church to move forward to enhancing the concept of “integral human development”, it will take a lot of soul searching and changing, if they want to make it right in the eyes of God.