Pope Francis in Chiapas affirms the rights of the indigenous peoples 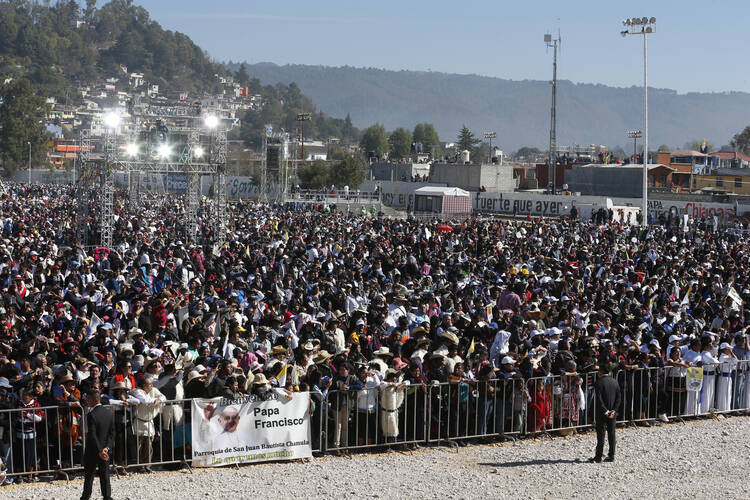 Pope Francis affirmed the right of Mexico’s 11 million indigenous people to live in a land “where oppression, mistreatment and humiliation are not the currency of the day.” He did so when he celebrated Mass for 100,000 of them in a field at San Cristobal de Las Casas, in the Southern state of Chiapas, on the third day of his visit here.

“In the heart of man and in the memory of many of our peoples is imprinted this yearning for a land, for a time when human corruption will be overcome by fraternity, when injustice will be conquered by solidarity and when violence will be silenced by peace,” the pope told his indigenous congregation. Most of them were from Chiapas, where they count for 28 percent of the population of the state, but thousands also came from Mexico’s 36 other dioceses, as well as 300 from Guatemala and 150 from El Salvador.

Francis first delivered his homily in Spanish, and when he finished it was translated into Tzeltal, up to now one of the two languages approved for the liturgy. He began by recalling the biblical story of how God led the Israelites from suffering and slavery in the country of the Pharaohs to the land of freedom, and then told his indigenous congregation that God “suffers as he sees the pain, mistreatment, and lack of justice for his people.” Even more, he shares their longing to live in a different land – “a promised land” – and has shown “his solidarity” with them by sending Jesus, his son who became man “so that darkness may not have the last word and the dawn may not cease to rise on the lives of his sons and daughters.”

Francis knows well the history and situation of the 68 indigenous peoples of Mexico, and he also knows the history of these peoples in other parts of the American continent. As a Jesuit in Argentina he learned much about this, and as pope he has repeatedly spoken in favor of their rights and called for respect for their cultures. He did so most forcefully when he spoke to the Popular Movements in Bolivia last year, and he did so too in speeches on his first day in Mexico.

He is the first pope to come to the city of San Cristobal de Las Casas, which was founded in 1528 and was one of the first cities in the Spanish colonies of North America. At an altitude of 7,281 feet, it was once called Ciudad Real and later San Cristobal, to which the name Las Casas was added later in honor of Bartolomé de Las Casas, the first bishop of Ciudad Real and forceful advocate of the rights of the indigenous peoples. The city was the political capital of the State of Chiapas until 1892, and is today its cultural capital.

Francis chose to come to Chiapas because he knows it is the least developed of Mexico’s 32 states, economically, socially and culturally. And though it is rich in natural resources, 75 percent of its people are poor, and 32 percent live in dire poverty according to Jesuit Father Pepe Aviles, who has worked here for 30 years.

In his homily, Francis spoke out strongly about this tragic situation. He recalled that “on many occasions, in a systematic and organized way, your people have been misunderstood and excluded from society. Some have considered your values, culture and traditions to be inferior. Others, intoxicated by power, money and market trends, have stolen your lands or contaminated them.”

Pausing at that point, he commented, “How sad this is!” As he has done in other situations in these days, so too here he issued a call to conversion to all who have been, or who are responsible for this grave situation that offends the dignity of God’s sons and daughters. “How worthwhile it would be for each of us to examine our conscience and learn to say, ‘Forgive me! Forgive me brothers!” he stated.

Then, looking out at his indigenous congregation, that included people of all ages, from babies in their mothers’ arms to the elderly huddled under various kinds of headgear, a great many of them wearing their traditional dress, Francis told them: “Today’s world, ravaged as it is by a throwaway culture, needs you!”

In this context he acknowledged their great respect and care for nature and the environment, and noted how it contrasts with the way the world is treated by others. Quoting from his recent encyclical on the care of our common home, he affirmed yet again that “we can no longer remain silent before one of the greatest environmental crises in world history.”

He told the indigenous people that in this regard, “you have much to teach us. Your peoples, as the bishops of Latin America have recognized, know how to interact harmoniously with nature, which they respect as a source of food, a common home and an altar of human sharing.”

Pope Francis is very concerned at the risks that the young indigenous people face today because they are “exposed to a culture that seeks to suppress all cultural heritage and features in pursuit of a homogenized world,” and they are subjected to efforts “to subdue and lull” them “into a kind of lassitude by suggesting that nothing can change, that their dreams can never come true.” On Saturday he called the Mexican bishops to greater commitment to the indigenous people, and to day he urged the young people to defend themselves against these onslaughts on their culture by clinging “to the wisdom of their elders!”

The crowd listened in total silence while he spoke, but immediately he finished they applauded. They did so even more enthusiastically when it was read to them in Tzeltal.

Francis arrived at Tuxtla Gutierrez airport early Monday morning from Mexico City which is his base during his five-day visit here. From there he flew by a Puma helicopter to San Cristobal, where the people cheered and waved on his arrival.

He celebrated Mass under a blazing sun at an altar erected on a dais in front of a painted wooden imitation of the ancient façade of the cathedral of San Cristobal. The background also included representations of Maya culture; they were the dominant people here before the Spanish conquistadores arrived. Francis used some words from the local languages in his homily, and at the Mass prayers were said and the scriptures were read in languages of the original peoples in this state. The music too reflected that culture.

As we have seen on his foreign trips to Latin American countries and in the United States, Francis has always called for respect and protection of the cultures of the indigenous peoples. He is convinced that the church should do more in this regard, and told the Mexican bishops this on his first day here. He knows that Rome has been vary cautious about this and 14 years ago stopped the program to have permanent indigenous deacons which Bishop Samuel Ruiz had started and which was most successful. Since becoming pope, in response to the request from the local church, Francis had the whole question studied again and then gave his approval for the program to be reinstated.

At the end of Mass today, he took another step in affirming the rights of these people by issuing a decree formally authorizing the use of nahuatl in the liturgy. This is the language most used by Mexico’s indigenous peoples but up to now it did not have Rome’s approval, whereas other languages such as Tzotzil and Tzeltal did.

Commenting on the pope’s visit, Father Pepe Aviles, S.J., told the press that by coming here Francis “has supported what we were doing in all these years” and he has given “encouragement, hope and strength” to the indigenous people and to the diocese of San Cristobal de las Casas that had “opted for the poor more than 40 years” when Samuel Ruiz was bishop.

That afternoon, Pope Francis travelled by helicopter from San Cristobal to Tuxlta Gutierrez where he held a very successful and inspiring meeting with families in a stadium, before returning to Mexico City.

Tomorrow, he will travel by plane to Morelia, the capital of Michoacán, which became infamous some years back for the violence linked to the drug wars. He’s sure to address the drug trade and the violence on his visit there, and to issue a call to those involved to be converted.