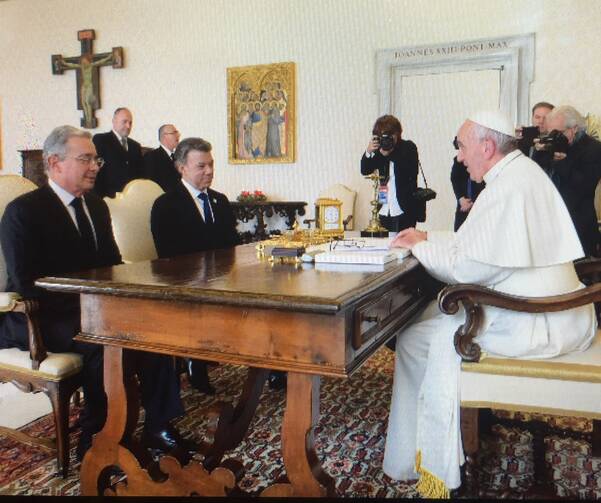 In an unexpected diplomatic initiative aimed at consolidating the fragile peace accord in Colombia, Pope Francis today brought together the country’s president, Juan Manuel Santos, and his archrival and a strong opponent of the accord, former president Senator Álvaro Uribe.

In a statement issued after the meeting between the three leaders, the Vatican said: “The Pope spoke about the ‘culture of encounter’ and emphasized the importance of sincere dialogue between all members of Colombian society at this historical moment.”

Francis has always supported the peace process in Colombia, hoping and praying for a definite end to the 52-year civil war between the government and the Armed Revolutionary Forces of Colombia (FARC). He has closely followed the efforts to reach an enduring accord and promised he would visit the country once the deal was ratified.

The original peace accord, signed by the president and the leader of the FARC in September, was narrowly rejected in a nationwide referendum. The Colombian parliament approved a revised version of the agreement at the end of November. But there are still difficulties, even after the parliamentary vote. The pope’s decision to bring the two leaders together in the Vatican is aimed at shoring up the accord.

Pope Francis took advantage of the fact that President Santos, who had come to Europe to receive the Nobel Peace Prize on Dec. 10, had asked for an audience with him in the Vatican. In a politically astute move, the pope asked the secretary of state, Cardinal Pietro Parolin, to also invite the main opponent of the peace accord, Senator Uribe, to a joint meeting in the Vatican.

“I received a call from Cardinal Parolin, who asked me to come here, and out of respect for the Holy Father and for the Colombian people I accepted to come,” the senator said before setting out for Rome. This was only the second time in six years that President Santos and ex-President Uribe have met. They first met in Bogota on Oct. 5 when as negotiations for the peace accord were under way, and Senator Uribe presented his objections to the accord and especially to the very light penalties that would be imposed on the guerilla leaders and the opening for their entrance into the political world as legislators. The president had ignored these two points in the revised version; that has been the main bone of contention since.

Today, as originally scheduled, Francis received President Santos in private audience in the apostolic palace at 10:30 a.m. At the beginning of their meeting, the president told the pope, “we need your help.”

President Santos gave the pope the gift of a pen made out of bullets, with which he and the leader of the FARC, Rodrigo Londono “Timochenko,” had signed the peace accord in Cartagena de Indias. On the pen were the words “Bullets wrote our past, peace our future.”

Francis gave the Colombian leader a bronze medal with the symbol of peace, his message for the World Day of Peace and the three main documents that he has written.

At midday, the Jesuit pope received Senator Uribe in private audience. The two men spoke together alone behind closed doors for 20 minutes.

Afterward, Francis hosted the 25-minute meeting in the apostolic palace between President Santos and Senator Uribe.

Gerard O’Connell
@gerryorome
Show Comments (
1
)
Comments are automatically closed two weeks after an article's initial publication. See our comments policy for more.
JR Cosgrove
5 years 6 months ago
I would suggest the writers on Latin America at America read the columns of Mary Anastasia O'Grady who writes regularly on Latin America in the Wall Street Journal. You will get a very detailed analysis of the agreement brokered by Santo with Cuba and the FARC. And why it is not in the best interest of Colombia to accept it. Need to get behind the pay wall at the WSJ to read her columns. She writes frequently on Cuba, Colombia, Brazil, Venezuela and other Latin America countries.