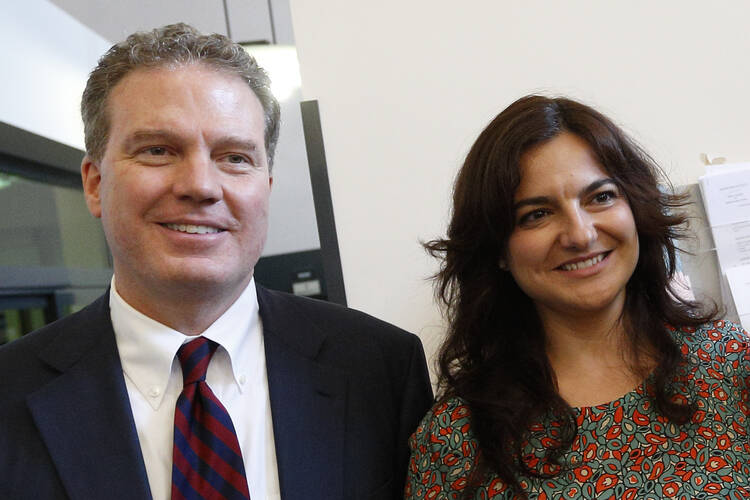 Pope Francis has appointed Greg Burke, a layman and former American TV and print reporter as the director of the Holy See’s Press Office. He has also appointed a Spanish lay woman, Paloma García Ovejero, as deputy director of the same office.

Mr. Burke will take over from Federico Lombardi, S.J., as director of this office and become the Vatican spokesperson on Aug. 1. Ms. García Ovejero will begin work on the same day, the Vatican said as it broke the news at noon on July 11.

While Mr. Burke’s appointment was expected after Francis named him deputy-director of the Holy See’s Press office on Dec. 21, 2015, Ms. García Ovejero’s appointment came as a big but most welcome surprise.

Greg Burke, 56, is a native of St. Louis, Mo., where he studied at a Jesuit school. He graduated from Columbia University with a degree in comparative literature and then specialized in journalism. He also became a member of Opus Dei.

After his studies in New York, he worked for United Press International of Chicago and Reuters news agency as well as Metropolitan, a weekly magazine, and later was sent to Rome as a correspondent for the National Catholic Register.

While in Rome in 1990, he began working for Time magazine and was its correspondent when St. John Paul II was proclaimed as its Man of the Year.

This jovial and outgoing American was Fox News’ correspondent in Italy from 2001-12 and also covered wars.

Mr. Burke told America, “I am thrilled and yet find it a bit daunting at the same time. I've seen first hand just how hard Father Lombardi works.

“But good communications is about team work, we certainly have a good team, starting with the top. Pope Francis has simply been a master at getting the message out. It's an honor to be working for him.”

Well known and highly respected in the Vatican, Benedict XVI called him at a time of great crisis to work as senior communications advisor to the General Affairs section of the Secretariat of State in 2012. The first Vatileaks scandal, involving the leaking of information by the pope’s butler to an Italian journalist, was then in full flood and there was a clear need for greater professional media assistance at higher levels in the Vatican. In that role Mr. Burke, who speaks English, Spanish, French and Italian, acted with high professionalism and total fidelity, and gained the trust and confidence of senior Vatican officials. His appointment today as successor to Father Lombardi is a direct consequence of this.

Father Lombardi has served under both Benedict XVI and Francis and has gained widespread respect and esteem for the both the professionalism and great humanity with which he carried out this highly demanding role. His extraordinary contribution merits a separate story.

The new deputy-director of the Holy See’s press office, Ms.Paloma García Ovejero, is a dynamic and very jovial person, too. Born in Madrid in 1975, she graduated in journalism in 1998 from a university in Madrid, and after gaining a master’s degree in Basque studies she went to New York University in 2006 where she specialized in management strategies and communication.

From 1998, she worked for "Cadena Cope, Radio Española," the radio of the Spanish Catholic Bishops Conference, first as editor, then chief editor and main radio host. In 2012, the radio sent her to Rome, where she has been its correspondent ever since, and has also contributed to various TV channels and print media. She speaks Spanish, English, Italian and Chinese.

It is interesting to note that both the new Vatican media appointments have studied in the United States, and for the first time ever the Vatican will have a man and a woman as the voice of the pope and the Holy See.

Gerard O’Connell
@gerryorome
Show Comments (
1
)
Comments are automatically closed two weeks after an article's initial publication. See our comments policy for more.
Frans Josef Meyer
6 years 4 months ago
'Vaticaninfo' notes that ms Paloma Garcia Ovejero is 'vinculada' (affiliated) to the Neocatechumenal Way. Can this be verified - and does America Magazine' have any commentaries to this information? It is well known that Greg Burke is a 'numerary' of Opus Dei. It would indeed seem noteworthy if the pope' s spokespersons for the coming years have their personal spiritual backgrounds in Opus Dei and The neocatechumenal Way. /Frans