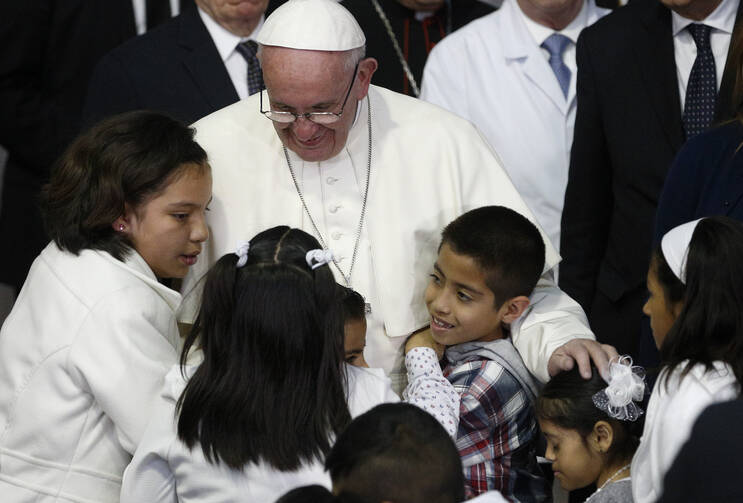 “Dear Pope Francis, My mum is in heaven. Will she grow angel wings?” That was one of the 30 questions from children from 12 countries and all continents that the pope answered in Dear Pope Francis, the first book ever written by a pope in response to children’s questions.

The question came from Luca, age 7, from Sydney, Australia; his mother died 14 months ago. Francis’ answer is to be found in the colorful, beautifully produced book, published by Loyola Press. He tells Luca:

No, No, No! Your mom is in heaven—beautiful, splendid, and full of light. She is still your mom, the person you know, but she is more radiant than ever. And she watches you and smiles at you as her son…

Luca and his sister Ruby, age 4, traveled with their dad, Ernesto, to the Vatican last Monday afternoon, Feb. 22, to receive the answer in the book from the hands of the pope. So, too, did 12 children from 11 other countries, including Argentina, Belgium, Canada, China, India, Ireland, Kenya and the United States. They were among the lucky 30 whose questions were selected and are now presented with the pope’s answers in the 72-page book.

The children, all excited, were sitting on the ground, in a semi-circle in front of the pope’s chair, when Francis arrived with a big smile. They immediately jumped to their feet and joyfully embraced him with great affection, much to his joy. When that first wave of enthusiasm passed they sat down again and, after official introductions, they asked him additional questions that are not in the book.

In the book we find 30 questions, all accompanied by drawings, including the following. Alejandra, 9, Peru, asked: “If God loved us so much and didn’t want us to suffer, why didn’t he defeat the devil?” Mohammed, 10, from Syria inquired, “Will the world be again as it was in the past?” while Karla Maria, 10, from Nicaragua asked, “Do bad people have a guardian angel too?” Juan Pablo, 10, from Argentina wondered, “Why did Jesus choose those twelve apostles and not others?” William, 7, from the United States, asked, “If you could do one miracle, what would it be?” Alexandra, 10, from the Philippines inquired, “Do you know why some parents argue with each other?” Ryan, from Canada, asked, “What did God do before the world was made?” And Clara, 11, from Ireland, wrote her question in Gaelic, “Do you feel a father to everyone?”

In actual fact, 259 children from 26 countries and all continents submitted questions in 14 languages, together with drawings illustrating their queries. Tom McGrath, the man who first came up with the idea for this great venture, gave the pope the other 229 questions that are not in this book at the end of this joyful and extraordinary event in the Vatican.

Jesuit Father Antonio Spadaro, Director of La Civiltà Catolica magazine, who did the first-ever interview with Francis in the summer of 2013, took the 30 questions to him with the drawings and recorded his answers in a 90-minute session at Santa Marta, the Vatican guesthouse where the pope resides. And when they finished the recording, Francis told him, “It’s beautiful to answer the questions of these children, but I should have them here with me, all of them.”

Loyola Press, headed by Paul Campbell, S.J., and Terry Locke, the president of the company, made his wish come true, at least in part. It arranged for 14 of the questioners (including two pairs of siblings) to meet Francis in a private audience in a room attached to the Paul VI audience hall, where he sometimes meets heads of state.

Responding to questions from the children in the one-hour meeting, Francis told them “to be happy in life you have to build bridges.” He revealed that early on in life, “I wanted to be a butcher,” because when he went to the market with his mother or grandmother he was impressed at the fine way butchers cut the meat, but later he studied chemistry and then became a Jesuit.

Questioned as to which saints he admires most, Francis said he has “various holy friends” including St. Therese of Lisieux, St. Ignatius of Loyola and St. Francis, and, he added, “I admire each one for different reasons.” When asked “What do you feel being pope?” he replied, “I feel great peace. God gave me the grace not to lose my peace. That’s a great gift from God. I feel like I’m going to the end of my life in this way, with much peace.”

In response to another question, he explained that he chose the name Francis because in the conclave when he “began to see” that he could be elected, his friend Cardinal Claudio Hummes of Brazil told him, “Don’t worry, that’s how the Holy Spirit works,” and when he was elected the cardinal whispered to him, “Don’t forget the poor.” Francis said that his words about the Holy Spirit and the poor caused him to accept and to take the name Francis, after Francis of Assisi who had great love for the poor.

“What love do you feel for Jesus?” a child asked. Francis surprised them with his response: “I don’t know if I love Jesus, I’m not sure of that but I’m absolutely sure of his love for me.” He offered them some words of advice for life: “Never be afraid is something bad happens to you, or if you commit a sin, because the love of Jesus is greater than all this.” One child asked how often he prays in a day, and this was Francis’ response:

I pray in the morning when I get up. I recite the breviary, the book of prayers that every priest says. I pray the Mass. And then I pray the rosary, which I keep in my pocket. I do the Eucharistic adoration before the Blessed Sacrament. Then I pray for the people I meet. I also carry in my pocket a little way of the cross which is like the way of the Cross of Jesus, and when I see all that Jesus suffered for me, for all of us, because of his great love, this moves me. I assure you, I ask that you please remember that the one only thing that gives us hope is to look at the cross of Jesus.

After the round of questions, the time came for the exchange of gifts. Each of the 14 children gave a gift to the pope. Ivan, 13, from Shanghai, China, brought him a statue of Our Lady of Sheshan and chopsticks—so that he could learn to use them before coming to China. Ryan from Canada presented him with a jar of maple syrup. Juan Pablo and Carolina each gave him a box of Alfajores, the Argentine sweet that he likes. William gave him a football, and so on.

Pope Francis had two gifts for each child: the book with his answers and a toy doll meant to resemble Jesus. Next, the children sang a joyful Spanish hymn that the pope knows well—“Yo tengo gozo en mi alma” (I have joy in my soul)—and then they joined him for a group photo.

Gerard O’Connell
@gerryorome
Show Comments (
1
)
Comments are automatically closed two weeks after an article's initial publication. See our comments policy for more.
Lisa Weber
6 years 11 months ago
What a joyful story! Thank you so much!