Pope Francis Announces the Names of 20 New Cardinals, 15 of them Electors. 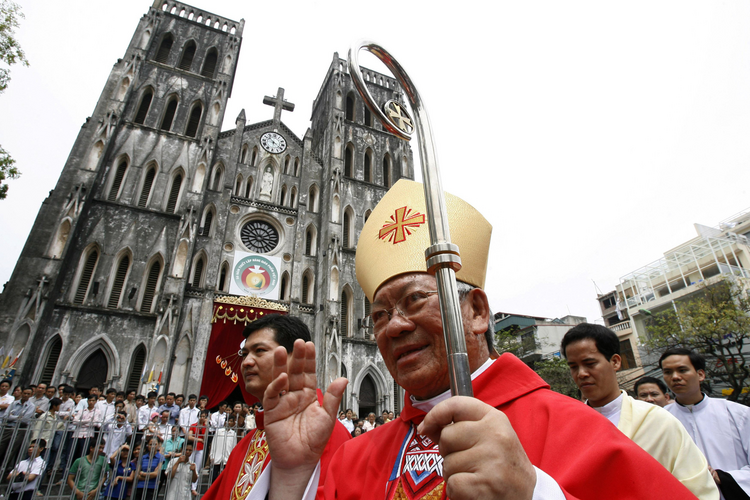 Pope Francis has announced that he will create 15 new cardinals from 13 countries who will have the right to vote in the next conclave, almost all are bishops of dioceses from all continents, and several are from  ‘the peripheries’ of the world.

He will also give the red hat to 5 retired archbishops and bishops who are over the age of 80 and are “distinguished for their pastoral charity in the service of the Holy See and of the Church”.

Significantly, abiding by past practice, he has not named any new cardinal-elector from a see where there is still a cardinal under the age of 80, and so he has not given the red hat to the archbishops of Chicago, Los Angeles, Philadelphia, Madrid or Sydney.

At the time of the announcement there were 10 vacant places in the College of Cardinal Electors, which according to the norms set by Paul VI and approved by his successors should have a total of 120 members.  Pope Francis, however, has decided to exceed that number by 5, and so on the day he holds the Consistory, if my calculations are correct, there will be  a total of 125 cardinal electors.

Only one of the new cardinals is from the Roman Curia and he is head of a major Vatican dicastery:  Archbishop Dominique Mamberti, the head of the Vatican’s Supreme Tribunal  (the Apostolic Segnatura). Born in Morocco, he was incardinated into a French diocese.

Apart from him, four of other the new cardinal electors are from Europe  (including two Italians): Patriarch of Lisbon (Portugal) and the Archbishop of Valledolid (Spain). Perhaps the surprise is that he has named two more Italian cardinals, though not from dioceses where the bishop has traditionally received the red hat.

It came as no surprise that he has named 3 new Asian cardinals: one each from Vietnam, Thailand and Myanmar.

He has named three from the Americas also: Mexico, Panama and Uruguay.  While from the Oceania he has decided to give red hat to the archbishop of Wellington, New Zealand, and to the bishop of Tonga.

He made the announcement shortly after midday on Sunday, January 4, and said he will hold the consistory to make the new cardinals on February 14.

Below, please find the complete text – from Vatican Radio - of the Pope’s announcement, with the names of all those set to be elevated to the Cardinalate:

“As was already announced, on February 14 next I will have the joy of holding a Concistory, during which I will name 15 new Cardinals who, coming from 13 countries from every continent, manifest the indissoluble links between the Church of Rome and the particular Churches present in the world.

“On Sunday February 15 I will preside at a solemn concelebration with the new Cardinals, while on February 12 and 13 I will hold a Consistory with all the Cardinals to reflect on the orientations and proposals for the reform of the Roman Curia.

“The new Cardinals are:

Archbishop Dominique Mamberti, Prefect of the Supreme Tribunal of the Apostolic Signatura

“Additionally, I will join to the Members of the College of Cardinals five Archbishops and Bishops Emeriti who are distinguished for their pastoral charity in the service of the Holy See and of the Church. They represent so many Bishops who, with the same pastoral solicitude, have given witness of love for Christ and for the people of God in particular Churches, in the Rome Curia, and in the Diplomatic Service of the Holy See.

“Let us pray for the new Cardinals, that, renewed in their love for Christ, they might be witnesses of His Gospel in the City of Rome and in the world, and with their pastoral experience they might support me more intensely in my apostolic service.

Gerard O’Connell
@gerryorome
Show Comments (
1
)
Comments are automatically closed two weeks after an article's initial publication. See our comments policy for more.
Jack Rakosky
6 years 6 months ago
Francis certainly seems to be destroying the customary career paths. If a bishop aspires to be archbishop in a major city, it does not mean he will become a cardinal. Under Francis, a bishop can become a cardinal, elector of future popes, and even pope by simply being a good archbishop or bishop anywhere. Francis has great skill and creativity in changing institutions, e.g. his decision to live in the guest hotel and mix with many lower level curial staff. Francis seems to have figured out what social psychologists have long known, that behavior is determined more by situations than by personality traits or beliefs. Change people's behavior by altering their environment rather than trying to change their beliefs or worse their personalities!