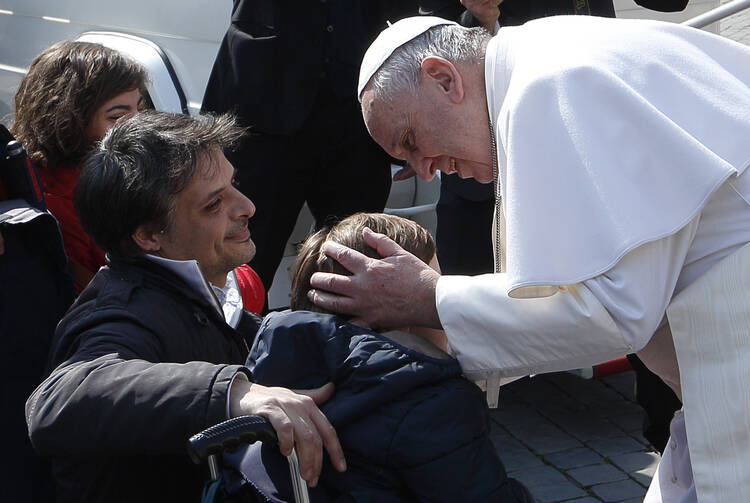 In a surprising and far-reaching decision, Pope Francis has announced an extraordinary “Jubilee of Mercy” that will extend from December 8, 2015 to November 20, 2016, and will involve the Catholic Church throughout the world.

He broke the news of this “Extraordinary Holy Year of Mercy”—another name for it—during a penitential celebration in St Peter’s Basilica on the evening of March 13, the second anniversary of his election as Bishop of Rome.

This is what he said: “Dear Brothers and Sisters I have often thought how the Church can make more evident its mission to be a witness of mercy. It’s a journey that begins with a spiritual conversion. For this purpose I have decided to proclaim an extraordinary Jubilee that will have as its center the mercy of God. It will be a Holy Year of Mercy. We want to live it in the light of the word of the Lord: ‘Be merciful as your Father.'"

The surprise announcement was greeted with warm applause. The pope then announced that it will begin on the feast of the Immaculate Conception, and end on Nov. 20, 2016, the feast of Christ the King. He said he has entrusted the organization of the Jubilee Year to the Pontifical Council for the New Evangelization, “so that it can animate a new stage of the journey of the Church in its mission to bring the Gospel of Mercy to every person.”

Francis said he is “convinced that the whole Church can find in this Jubilee the joy of rediscovering and making fruitful the mercy of God, with which we are all called to give consolation to every man and every woman of our time.” He entrusted this Jubilee to “the Mother of Mercy” so that she may watch “our journey” in this year

Pope Francis will open this 30th Jubilee in the history of the Church on the fiftieth anniversary of the closing of the Second Vatican Council (1965), and just over a month after the closing of the October synod on the Family. The significance of all this cannot be underestimated.

Francis wants to reconcile people to God across the globe. He wants to “open the doors” of Divine Mercy to those who have been excluded from the life of the church and its sacraments, or have distanced themselves from it, and who with sincere hearts seek to return and obtain God’s forgiveness.

A Jubilee year is a great religious event. It originated in Judaism and was linked to universal pardons and reconciliation and, as the Old Testament Book of Leviticus (Chapter 25: 8-13) tells us, it was celebrated every fifty years. It was a year in which slaves and prisoners were freed, debts were forgiven and God’s mercy was made more manifest.

The Roman Catholic Church revived that tradition in the year 1300 under Pope Boniface VII. Since then there have been 29 Jubilees or Holy Years. (Jubilees were first celebrated at intervals of 100 years, then 50 and more recently 25, and were classified as “ordinary.” Holy Years were held at lesser intervals, according to need, and deemed “extraordinary.”)

Believers prepare themselves spiritually to obtain that pardon and reconciliation with God by taking part in pilgrimages to Rome, or to their local or national churches, and going to confession (the sacrament of reconciliation). They then go through these doors on their knees to gain the indulgence of the Jubilee.

A Jubilee Year “is a year of special grace, of remission of sins and the punishment due to them, a year of reconciliation between disputing parties,” St John Paul II wrote in 1994 in preparation for the Great Jubilee in the year 2000.

“It is also a year of conversion and receiving the Sacrament of Reconciliation, and consequently of solidarity, hope, justice, commitment to serve God with joy and in peace with our brothers and sisters” according to a Vatican document written in preparation for that last jubilee.  “It is above all else the year of Christ who brings life and grace to humanity”.

Francis is known as “The Pope of Mercy” because ever since his election on March 13, 2013 he has never ceased to proclaim to the world that God is a “God of Mercy”, who wants to save people, not to condemn them.

It was the central theme of his first mass for the public in the church of Sant’ Anna in the Vatican on March 17, and his midday talk to almost half-a-million people that gathered in and around St Peter’s Square that same day, when he praised Cardinal Walter Kasper’s book on the theme of mercy.   It is a theme that has surfaced again and again in his talks and homilies throughout these past two years.

Francis traces his own vocation to the priesthood to the overwhelming experience of God’s mercy that he felt when, almost 17 years old, he went to confession in a church in Buenos Aires on September 21, 1953.

“I believe that this is the season of mercy,” Francis told journalists on the flight back from Rio de Janeiro, July 28, 2013 in remarks that go to the heart of today’s decision.

“This new era we have entered, and the many problems in the Church—like the poor witness given by some priests, problems of corruption in the Church, the problem of clericalism for example—have left so many people hurt, left so much hurt. The Church is a mother: she has to go out to heal those who are hurting, with mercy,” he stated.

“If the Lord never tires of forgiving, we have no other choice than this: first of all, to care for those who are hurting. The Church is a mother, and she must travel this path of mercy. And find a form of mercy for all,” he added then.

He recalled that “When the prodigal son returned home, I don’t think his father told him: “You, sit down and listen: what did you do with the money?” No! He celebrated! Then, perhaps, when the son was ready to speak, he spoke. The church has to do this, when there is someone… not only wait for them, but go out and find them! That is what mercy is.”

Then in a highly significant statement that already contained the seed for today’s decision, Pope Francis declared: “I believe that this is a ‘kairos’, this time is a kairos of mercy.”

He recalled that “John Paul II had the first intuition of this, when he began with Faustina Kowalska, the Divine Mercy... he had intuited that this was a need in our time.”

Francis’ 45 years as a priest, 21 years as bishop, and two years as pope has convinced him more than ever that this is indeed the “kairos”—the God given moment—for the church to show mercy.

He insisted on the need to show mercy in his inspiring homily to the new cardinals on February 15, when he concelebrated mass with them in St Peter’s Basilica. He recalled that in the church’s history and also today, “There are two ways of thinking and of having faith: we can fear to lose the saved and we can want to save the lost.” There is “the thinking of the doctors of the law, which would remove the danger by casting out the diseased person,” and there is “the thinking of God, who in his mercy embraces and accepts by reinstating him and turning evil into good, condemnation into salvation and exclusion into proclamation.”

He recalled that “The church’s way, from the time of the Council of Jerusalem, has always been the way of Jesus, the way of mercy and reinstatement." This means, he said, “welcoming the repentant prodigal son; healing the wounds of sin with courage and determination; rolling up our sleeves and not standing by and watching passively the suffering of the world.”

He expressed the same concept even more succinctly last week in a letter commemorating the centenary of the Catholic University of Argentina in Buenos Aires, when he wrote: “Mercy is not just a pastoral attitude; it is the very substance of the Gospel message”.

Earlier this week speaking to confessors, he told them: “Let is never forget, whether as penitents or confessors: there is no sin that God cannot forgive, not one!”

Now he is taking this message a step further, with his decision to proclaim a Jubilee Year. The Vatican said he will issue the bull formally proclaiming the Jubilee on Divine Mercy Sunday, April 12, and place it on the front of the Holy Door in St Peter’s Basilica.

Gerard O’Connell
@gerryorome
Show Comments (
3
)
Comments are automatically closed two weeks after an article's initial publication. See our comments policy for more.
Bill Mazzella
7 years 8 months ago
The mercies of the Lord endure forever. What a sea change in Rome. Just who do we think we are to shut the door on God's mercy. http://ncronline.org/blogs/ncr-today/francis-who-are-you-shut-door-mercy-someone
Luis Gutierrez
7 years 8 months ago
Mercifully phasing out the male-only priesthood would be for the glory of God and the good of souls. God knows we need this miracle!
judith wisniewski
7 years 8 months ago
In this coming year of celebrating mercy, now is the time to reconsider the General Absolution form of Reconciliation. This could be the gateway to evangelization, forgiveness, a return of the prodigals, a return of 'lapsed' members, a new understanding of mercy, an encounter with the Lord without the bean counting.