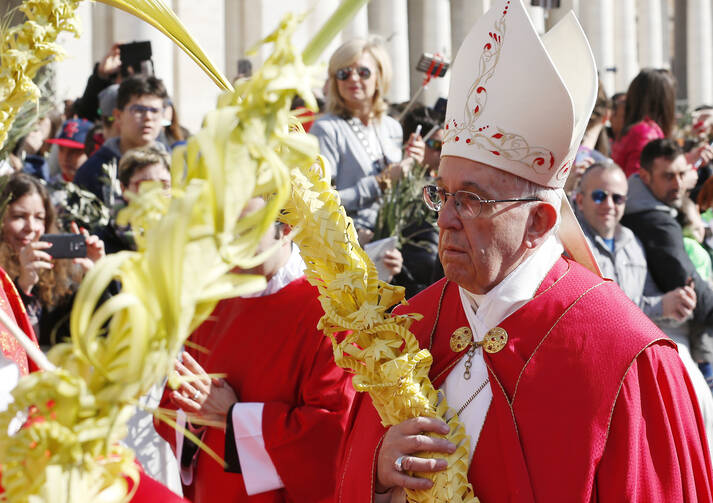 Pope Francis decried “the indifference” to the fate of the refugees and migrants in today’s world, as he opened the Holy Week celebrations in Rome on Palm Sunday, March 20. He recalled that just as Jesus “experienced indifference in his own flesh” to the point that “no one wished to take responsibility for his fate,” so also today “many do not want to take responsibility for the fate of the many emarginated people, the many migrants, the many refugees.”

With these words he departed from the prepared text of his homily to throw the spotlight on the dramatic plight of migrants and refugees as country after country in Europe and elsewhere throw up barriers to prevent these desperate people, who are fleeing war and poverty, from entering. On Friday the European Union sought to pass the buck to Turkey in a manner that raises serious concern about its respect for international humanitarian law and is widely perceived as offering no real solution to this enormous human tragedy.

Francis will again highlight this inhuman situation, the greatest humanitarian crisis since World War II, with a powerful symbolic gesture on Holy Thursday, March 24, when he will wash the feet of 12 refugees at a center that gives them hospitality in Rome.

He opened today’s celebration, attended by some 100,000 pilgrims from many lands, by blessing palms and olive branches at the obelisk in the center of St. Peter’s Square. Then, wearing red vestments and holding a palm in his hand, he walked at the end of the procession to the altar on the steps of the basilica. Cardinals, bishops, men and women religious and young people participated in the procession that commemorates Jesus’ triumphant entry into Jerusalem, on a donkey, before his passion and death, some 2,000 years ago.

Francis delivered his homily after three deacons had read the Gospel account of the passion and death of Jesus. Referring to the procession that had taken place earlier, he said “The crowd of Jerusalem exclaimed joyfully as they welcomed Jesus. We have made that enthusiasm our own: by waving our olive and palm branches we have expressed our praise and our joy, our desire to receive Jesus who comes to us. Just as he entered Jerusalem, so he desires to enter our cities and our lives,” and he does so, as the Gospel tells us, “riding on a donkey,” because today too “he comes to us in humility.”

Indeed, the Argentine pope focused his entire homily on the humility of Jesus. He reminded people that Jesus did not save us by “powerful miracles,” instead “he emptied himself, and humbled himself.” He “did not cling to the glory that was his as the Son of God, but became the Son of man in order to be in solidarity with us sinners in all things; yet he was without sin.” Even more, “Jesus lived among us in ‘the condition of a servant’; not of a king or a prince, but of a servant. Therefore he humbled himself, and the abyss of his humiliation, as Holy Week shows us, seems to be bottomless.”

He recalled that “the first sign of this love ‘without end’ is the washing of the feet” when Jesus, the Lord and Master, “stoops to his disciples’ feet, as only servants would have done,” showing us that “true love consists in concrete service.”

The Jesuit pope said the washing of the feet “is only the beginning,” and “the humiliation of Jesus reaches its utmost in the Passion." He was “sold for thirty pieces of silver and betrayed by the kiss of a disciple whom he had chosen and called his friend.” Most of the other chosen ones “flee and abandon him” and “Peter denies him three times.” Francis recalled the other humiliations that Jesus suffered in his passion, including “the shame and disgraceful condemnation” he experienced at the hand of the “religious and political authorities: he is made into sin and considered to be unjust,” as they pass him from one to another: from Pilate to Herod to the Roman governor.

“Even as every form of justice is denied to him,” Francis said “Jesus also experiences in his own flesh indifference, since no one wishes to take responsibility for his fate.” And as he endured death on the cross, “that most painful form of shame reserved for traitors, slaves and the worst kind of criminals,” so as “to be totally in solidarity with us” Jesus “also experiences on the Cross the mysterious abandonment of the Father.”

Francis recalled that Jesus, “hanging from the wood of the cross,” confronted “the last temptation: to come down from the Cross, to conquer evil by might and to show the face of a powerful and invincible God.” There, at the height of his annihilation, Jesus “reveals the true face of God, which is mercy: he forgives those who are crucifying him, he opens the gates of paradise to the repentant thief and he touches the heart of the centurion.”

In actual fact, the pope said, “If the mystery of evil is unfathomable, then the reality of Love poured out through him is infinite, reaching even to the tomb and to hell. He takes upon himself all our pain that he may redeem it, bringing light to darkness, life to death, and love to hatred.”

Pope Francis concluded his deeply moving homily by telling the pilgrims attending this celebration, and the millions following it on television in many countries, that “God’s way of acting may seem so far removed from our own, that he was annihilated for our sake, while it seems difficult for us to even forget ourselves a little.”

He said, “Jesus comes to save us; we are called to choose his way: the way of service, of giving, of forgetfulness of ourselves.” He encouraged everyone to “walk this path, pausing in these days to gaze upon the Crucifix, the ‘royal seat of God,’ to learn about the humble love which saves and gives life, so that we may give up all selfishness, and the seeking of power and fame.

Pope Francis celebrated the Mass in Italian, and the Sistine Choir sang in Latin. The prayers of the faithful were read in several languages: they prayed for the church in Spanish, for those who govern, for legislators and magistrates in Chinese, for persecuted Christians in Swahili, for the poor and discarded in Vietnamese, and for the young people of the world in French.

At the end of mass, Francis greeted the many young people present in the square and hoped they would come “in large numbers” to the 31st World Youth Day at the end of July, in Krakow, Poland, “the homeland of John Paul II who started this event.”

He concluded the celebration by inviting five young children to accompany him on the popemobile as he drove rapidly among the crowd to greet them.

Gerard O’Connell
@gerryorome
Show Comments (
1
)
Comments are automatically closed two weeks after an article's initial publication. See our comments policy for more.
William Rydberg
6 years 6 months ago
I think that Pope Francis should also go to traditionally non-Christian, Asian Countries and remind them that Jesus-God come in the flesh was Asian. That His word applies to them as well. After all, they're going to be judged too.... Just my opinion. in the Risen Christ,