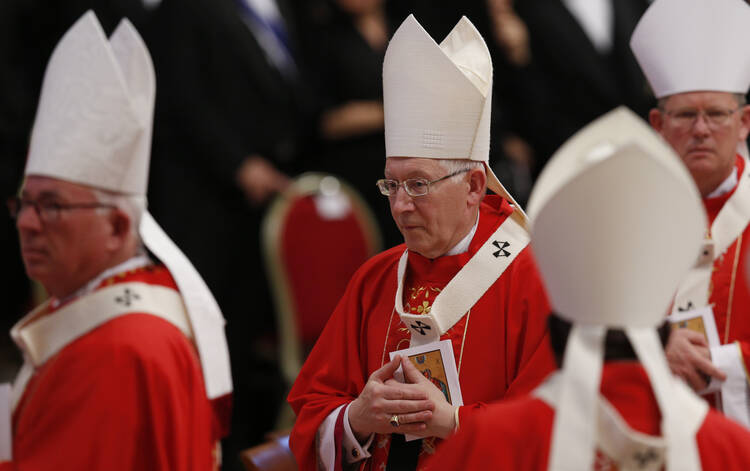 Pope Francis has decided that the public ceremony of investiture of the Pallium on Metropolitan Archbishops will henceforth take place in the prelates’ home dioceses and not in the Vatican as has been the case under recent pontiffs.

He believes that in this way the ceremony "will greatly favor the participation of the local Church in an important moment of its life and history.” Monsignor Guido Marini, the Master of Ceremonies of papal liturgies stated this, when he broke the news in a January 12 letter to nuncios in countries where there are metropolitan archbishops that were expected to receive the pallium from the Pope in the Vatican on June 29, the feast of Saints Peter and Paul.

Furthermore, he said, Pope Francis believes that this new custom can serve to advance “that journey of synodality in the Catholic Church which, from the beginning of his pontificate, he has constantly emphasized as particularly urgent and precious at this time in the history of the Church”

The pallium is a liturgical vestment that symbolizes “the bonds of hierarchical communion between the See of Peter and the Successor of the Apostle and those who are chosen to carry out the episcopal ministry as Metropolitan Archbishop of an Ecclesiastical Province,” Mgr Marini wrote. It is also a symbol of the Metropolitan Archbishop’s jurisdiction in his own diocese and in the other dioceses of his ecclesiastical province.

A Vatican website note explains that the “pallium” of the metropolitan archbishop, in its present form, is a straight sash of material of almost five centimeters, made of white lamb's wool, curved at the center thus allowing it to rest on the shoulders over the Roman or Gothic chasuble and with two black flaps falling in front and behind, so that, seen either from the front or from behind, the vestment reminds one of the letter "Y." It is decorated with six crosses of black silk, one on each end and four on the incurvature, and is decorated in front and on the back, with three pins made of gold and jewels.

Benedict XVI explaining "the symbolism of the pallium" in a very concrete way in his homily when he inaugurated his Petrine ministry on 24 April 2005, said,“the lamb’s wool is meant to represent the lost, the sick or weak sheep which the shepherd places on his shoulders to carry to the waters of life.”

In his January letter to the Nuncios, Mgr. Marini’s revealed that Pope Francis took his decision regarding the pallium “after a long reflection and upon receiving advice which he had requested.” He said the Holy Father has decided that “the pallium will be blessed during the Mass on the feast of Saints Peter and Paul in the Vatican, but placed on the Metropolitan Archbishop in his own diocese, by his representative, the Apostolic Nuncio.”

The papal Master of Ceremonies also stated that the new Metropolitan Archbishops “are invited to concelebrate” mass with the Pope on June 29, the feast of Saints Peter and Paul. At the end of mass, he said, they will receive the Pallium “in a private manner, from the hands of the Holy Father.”

After that it will be “the responsibility” of the Nuncio to determine with the Metropolitan Archbishop(s) the most opportune date, circumstances and manner to “publicly and officially” invest him with the pallium “by mandate of the Holy Father,” and with the participation of the Suffragan Bishops of the Province.

This then is what will happen with the new Archbishop of Chicago, Blase Cupich, who is the only metropolitan archbishop appointed by Pope Francis in the United States since 1 July 2014. He will concelebrate mass with the Pope, in the Vatican, on June 29, together with some 40 other metropolitan archbishops from all continents. At the end of mass, he will receive the pallium from the hands of the pontiff "in a private manner.” Some time afterwards, the Nuncio in the USA, Archbishop Carlo Maria Vigano, will invest him with the pallium at a public ceremony in the Chicago archdiocese, in the presence of the Suffragan Bishops of that ecclesiatical province.

Asked to comment on the significance of the papal decision, the emeritus Archbishop of San Francisco, John R. Quinn, who has written insightfully on synodality in his book, Ever Ancient, Ever New: Structures of Communion in the Church (Paulist Press, 2013), had this to say:

He recalled that the pallium "is the most ancient symbol of the bishop’s office going back as far as the fourth century. It predates the miter and the crosier as episcopal symbols."

Archbishop Quinn said the Pope has introduced this new policy  "to underline synodality in the Church," and he recalled that on June, 29,  2013, Pope Francis stated clearly that "Synodality is the path of the Catholic Church.” In this light, he said, the pontiff''s decision "becomes a reminder to the Archbishop, to his own diocese and to the bishops and dioceses of his Metropolitan Province that they are being called to open new paths to a true synodality of participation and communion in their Churches."

Gerard O’Connell
@gerryorome
Show Comments (
1
)
Comments are automatically closed two weeks after an article's initial publication. See our comments policy for more.
William Rydberg
7 years 6 months ago
The writing was on the wall when they started increasing the number of local Church Canonizations...